Minister for Information, Broadcasting Chaudhry Fawad Hussain immediately after assuming charge of the Ministry of Law and Justice issued directives for setting up a commission on global conspiracy against Pakistan.

The commission would look into the factors such as the change of government and the no-confidence motion through a global conspiracy. The commission would hold thorough investigations into the global conspiracy and compile its report. The federal law minister also issued orders to replace dozens of legal officers in Islamabad, Karachi and Lahore. He also directed all officers of the Ministry of Law and Justice to perform their duties in an efficient manner.

The law minister’s decision comes after PM Imran termed the opposition’s no-confidence motion against him a “huge foreign conspiracy against Pakistan”.

The premier accused a “foreign country” of meddling in Pakistan’s politics claiming during a speech at a public rally that there was a “foreign-funded plot” being hatched against his government. He showed a letter as evidence of the existence of the conspiracy aimed at toppling the ruling party. However, he did not divulge the letter’s contents. On April 31, the United States State Department spokesman said that they are “closely” monitoring the situation in Pakistan and supported the country’s constitutional process, responding to a question about PM Imran’s statements. “We are closely following developments in Pakistan, and we respect (and) we support Pakistan’s constitutional process and the rule of law,” spokesman Ned Price said in reply to a question at his daily press briefing. “But,” he added, “When it comes to those allegations, there is no truth to them.” Fawad Chaudhry’s appointment as law minister comes three days after the resignation of Barrister Farogh Naseem as the Muttahida Qaumi Movement-Pakistan (MQM-P) formally parted ways with the ruling party to join the opposition. Alongside Farogh Naseem, MQM-P leader Aminul Haque also resigned from his post of Minister for Information Technology. The lawmakers had sent their resignation letters to Prime Minister Imran Khan. 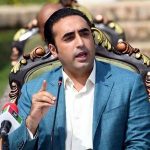