Netizens Upset With Male Actors Cosying Up With Hania Aamir 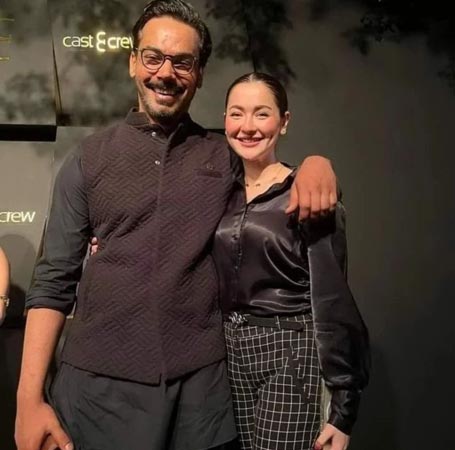 People express outrage towards Ahsan Khan and Gohar Rasheed for holding Hania Aamir “hostage” for photos at a launch event in Karachi. Hania Aamir is one of the biggest names in the Pakistani showbiz industry. The young diva is a household name due to her charming personality and beautiful looks. The 25-year-old gave stellar performances in hit drama serials such as Ishqiya and Dil Ruba. The actress made quite a name for herself in the blockbuster feature film Parwaz Hai Junoon. Currently, the young starlet is winning over fans with her performance in Sang-e-Mah alongside the likes of Atif Aslam, Nauman Ijaz and more.

Recently, the showbiz diva was at the launch event for Humayun Saeed and Adnan Siddiqui’s Cast & Crew brand in Karachi. The who’s who of the showbiz, as well as public figures from other industries were present at the glamorous event.

However, it is the Dil Ruba star who is trending on social media following the event. It appears fans are upset with how comfortable several male actors are with Hania Aamir. People do not like how Gohar Rasheed and Ahsan Khan are hugging and posing with the actress. Some people believe the Sang-e-Mah star is feeling “uncomfortable” as keyboard warriors take to social media to share their displeasure over Hania’s treatment.