Inside Chris Rock’s First Comedy Shows Since Will Smith Slap 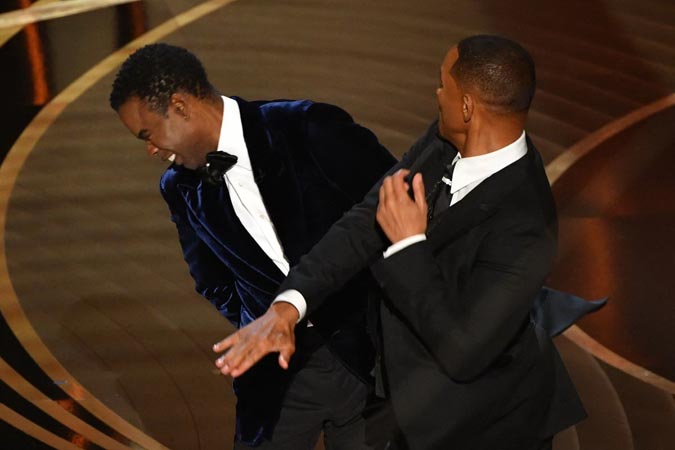 Chris Rock has hit the stage once again-and this time, he was the one on the receiving end of a standing ovation.? ?On March 30, the 57-year-old comedian kicked off his scheduled set of standup shows at the Wilbur Theatre in Boston (which served as his first in five years). Confidentially, it was also the first time audiences got a glimpse of-and heard from-Chris himself just days after his onstage altercation with Will Smith at the 2022 Oscars.? ?Coming out to a standing ovation from the audience at the start of the 10 p.m. show, the standup comedian shook a few hands of those seated right up front before launching into his set. He started things off by jokingly asking the crowd, “Wooooo. How was your weekend?” ? ?After taking a pause, he continued, “I wrote a show before all this nonsense happened. I don’t really wanna talk about that s–t.” Chris also went on to say that “he hasn’t even had time to process it” and “hasn’t talked to anyone about it, despite what you may have heard.”

Despite the ongoing controversy that has unfolded over the past few days, Chris-who is dad to daughters Lola, 19 and Zahra, 17, (whose mom is his ex Malaak Compton-Rock)-expressed that he has other things on his mind instead. Revealing that one of his daughters didn’t get into her first-choice school last week, he noted that hearing that news was “what the worst thing [that] happened to him in this last week has been.”

“I wanna do a comedy show,” he said as he moved on into his routine. And although about halfway through the show, one audience member yelled “f–k Will Smith,” Chris ignored the verbal jab and stuck to his jokes.

It was during the March 27 Oscars ceremony that Chris, who was on stage to present an award, made a joke about Jada-Pinkett Smith, who has been open about her battle with alopecia, starring in “G.I. Jane 2.” In response, Will got on stage, slapped the comedian and upon returning to his seat told Chris to “keep his wife’s name out of his f–king mouth.”

During his tearful acceptance speech for Best Actor later that evening, Will apologized to his nominees and the Academy, but issued a direct public apology to Chris the following day. “I would like to publicly apologize to you, Chris,” he wrote in a statement. “I was out of line, and I was wrong. I am embarrassed and my actions were not indicative of the man I want to be. There is no place for violence in a world of love and kindness.”? ?Prior to Chris’ response, the Academy also addressed the incident, sharing that the organization “does not condone violence of any form” in a March 28 statement posted to Twitter. The Academy has since said they are also exploring possible consequences for Will’s actions, revealing on March 30 that Will “was asked to leave the ceremony and refused.”