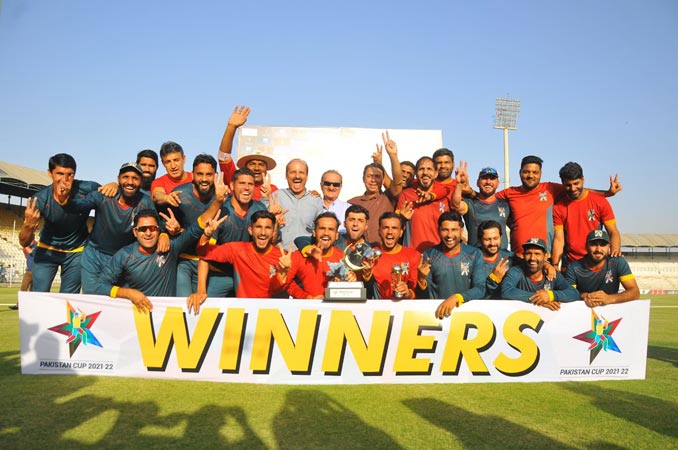 LAHORE: Yasir Shah-led Balochistan made history when they defeated defending champions Khyber Pakhtunkhwa by eight wickets at the Multan Cricket Stadium to clinch the Pakistan Cup – the final tournament of the 2021-22 domestic cricket season. This was Balochistan’s first title since the inception of the new domestic structure in 2019. Khyber Pakhtunkhwa have already annexed the U13, U16, U19, National T20 Cup and Quaid-e-Azam Trophy titles and were looking to take the sixth title home, but was unable to do so courtesy brilliant bowling and captaincy from Yasir Shah and batting from young right-handed batter Abdul Wahid Bangalzai. Chasing 172 to win, Balochistan achieved the target in the 32nd over for the loss of two wickets. The 19-year old Bangalzai took the centre stage in the final with a brilliant unbeaten 80 off 77 balls, the right-hander hit nine fours and two sixes in his innings to ensure a commanding victory for his side.

Bangalzai added 77 runs for the second wicket with Haseebullah (45 off 58, six fours) to provide his side a solid platform. Asad Shafiq who batted at number four, returned undefeated on 21 off 33 balls (one four) in a 70-run unbeaten third wicket stand with Bangalzai. Balochistan took away the glittering Pakistan Cup trophy besides the PKR5million winners’ prize. Khyber Pakhtunkhwa bagged PKR2.5million. For his match winning performance, Yasir was named the player-of-the-match.

Earlier, Khyber Pakhtunkhwa were asked to bat first by Balochistan captain Yasir. Right-arm fast Khurram Shahzad sent back Ashfaq Ahmed in the first over for naught. Kamran Ghulam held the innings together as wickets fell at regular intervals at the other end. The right-hander scored 70 off 91 balls (seven fours, one six). Khyber Pakhtunkhwa folded for 171 runs in 46 overs as leg-spinner Yasir took four wickets for 33 in 10 overs. Khurram and Akif Javed took two wickets apiece.