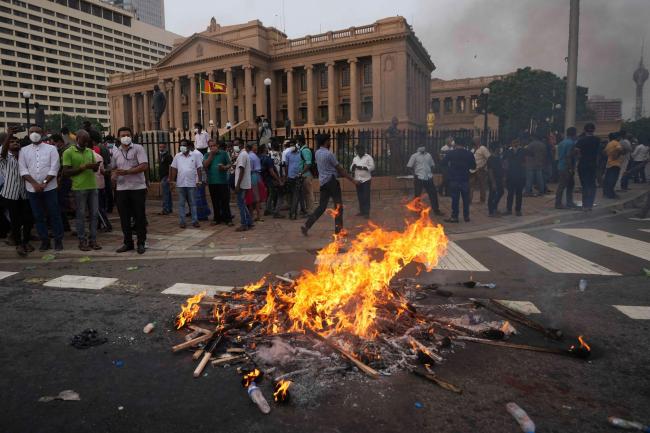 COLOMBO: A protest by hundreds of people trying to storm the home of Sri Lankan President Gotabaya Rajapaksa turned violent Thursday, with at least one man critically wounded, as residents slammed the government’s handling of the country’s crippling economic crisis.

Security forces fired into the crowd — it was not immediately clear if they used live rounds or rubber bullets — and used tear gas and water cannon to disperse the demonstrators, who were demanding Rajapaksa’s resignation.

Protesters set fire to an army bus parked across the lane leading to Rajapaksa’s home in Colombo’s Mirihana residential quarter, as well as a police vehicle. They also toppled a neighbour’s wall and used bricks to attack officers and troops.

Official sources told AFP that Rajapaksa was not at home during the melee, but top military officials went into a huddle to discuss the crisis.

The capital was placed under indefinite curfew in the wake of the violence. Four hours into the protest, the area remained blocked for vehicles.

“I am unable to go home because our area is barricaded,” one resident told AFP. “People are shouting for the president and his family to step down.”

The South Asian nation of 22 million people is in the grips of its worst downturn since independence, sparked by an acute lack of foreign currency to pay for even the most essential imports.

Diesel — the main fuel for buses and commercial vehicles — was unavailable at stations across the island on Thursday, according to officials and media reports — crippling public transport.

The rally had been called by social media activists who were not immediately identified, but their ire was directed at Rajapaksa and his family.

A live broadcast of the demonstration by a private television network abruptly stopped after what journalists said was pressure from the government.

However, videos shared on social media showed men and women shouting “lunatic, lunatic go home” and demanding that all members of the powerful Rajapaksa family step down.

The president’s elder brother Mahinda serves as prime minister while the youngest — Basil — holds the finance portfolio. The eldest brother Chamal is agriculture minister while nephew Namal holds the cabinet post for sports.

Diesel shortages had sparked outrage across Sri Lanka in recent days, but the protests had so far been in towns and not aimed at any top leader, before Thursday’s events.

“We are siphoning off fuel from buses that are in the garage for repairs and using that diesel to operate serviceable vehicles,” Transport Minister Dilum Amunugama said.

Owners of private buses — which account for two-thirds of the country’s fleet — said they were already out of oil and that even skeleton services might not be possible after Friday.

“We are still using old stocks of diesel, but if we don’t get supplies by this evening, we will not be able to operate,” the chairman of the private bus operators’ association, Gemunu Wijeratne, told AFP.

The state electricity monopoly said it had enforced a 13-hour power cut from Thursday — the longest ever — because they did not have diesel for generators.

Reservoirs, which provide more than a third of electricity demand via hydro power plants, were also at dangerously low levels.

The electricity rationing also hit mobile phone base stations and affected the quality of calls, operators said, adding that their stand-by generators were also without diesel.

Several state-run hospitals have stopped conducting surgeries as they have run out of essential life-saving medicines.

Colombo imposed a broad import ban in March 2020 in a bid to save foreign currency needed to service its $51 billion in foreign debt.

The government has said it is seeking a bailout from the International Monetary Fund while asking for more loans from India and China.

Sri Lanka’s predicament was exacerbated by the Covid-19 pandemic, which torpedoed tourism and remittances.