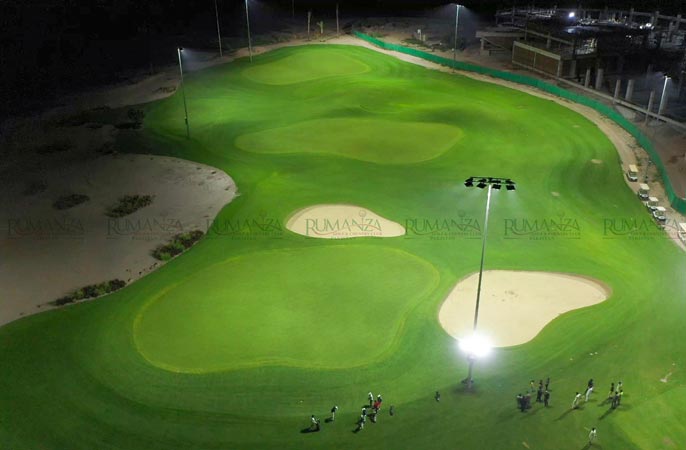 MULTAN: The wind of change in the golfing landscape of Pakistan carries an engaging and delightful tone of congenial, comradely and appealing sentiment that results in a blooming phenomenon in the shape of the par 72 Rumanza Golf and Country Club Golf Course that elevates our existence in the golfing world. Launched as a project just five years back, this facility of excellence held the Rumanza Inaugural over the past two days after enormous efforts on the part of DHA Multan, Sir Nick Faldo Design Construction UK and the Project Team who fulfilled all obligations through an ardent and profound effort that need to be commended and venerated with wholesome acclamation and admiration. That the project stands completed as per schedule and without any over runs makes the country look capable and proficient and visibly apparent is sincerity of purpose even though COVID remained a stumbling block that was adequately neutralized through well thought out strategy and steadfast measures.

The Rumanza Golf Course was opened up for golfing action over the weekend through an exciting international event labelled as the Rumanza Inaugural and the international stars who illuminated the golf course with their presence included six times major winner Sir Nick Faldo and also there was 2010 United States Open champion and four times PGA Tour winner Graeme Mcdowell from Northern Ireland. Another celebrity golfer competing alongside was 2021 Spanish Open winner and European Ryder Cup star Rafa Cabrera from Spain. To add feminine colour was the six times European Tour winner Charlie Hull whose mere presence on the golf course was an athletic site and she turned out to be an inspiration for the golfing fans and in particular golf playing women of Pakistan, many of whom were there for coaching tips and intimate closeness.

Another event that was excitement packed was the Scrambles Match Play over 18 holes. And the participating teams comprised of Graeme Mcdowell (world class player), Charlie Hull, the super golf playing woman from Europe, and Hamza Amin, a top ranked golf professional of Pakistan. And the other team comprised of Rafa Bello, the 2021 Spanish Open winner and Ryder Cup star, Ahmed Baig, the number two ranked golf professional of the country, and teen-aged sensation of Pakistan Humna Amjad. The Rumanza Golf Course is the first signature golf course of Pakistan spread over 270 acres and it is Asia’s largest 18 holes golf course. So from now on Rumanza Golf Course puts Pakistan right ahead on the world map of golf. Certainly a proud happening!