* Courts bound to decide fake news cases within six months; action to be taken if a judge delays case 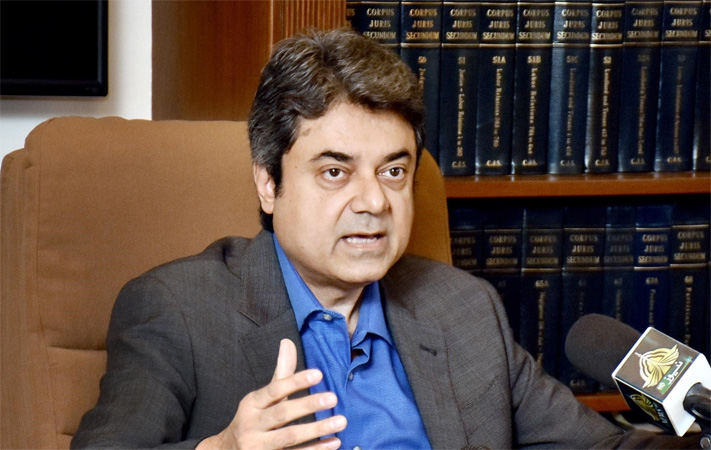 Law Minister Farogh Naseem Sunday said the imprisonment for spreading fake news had been increased from three years to five years, while the offence has also been made non-bailable. Addressing a press conference in Karachi, the law minister said the complainant can seek defamation and criminal proceedings against the accused since now it had become a cognizable offence. According to Naseem, the government amended the Prevention of Electronic Crimes Act (PECA) 2016 to penalize fake news as “lies cannot be allowed to become the foundation of a society.” He said fake news were spread at the behest of foreign powers, particularly India, in a bid to create instability in Pakistan.

The minister also referred to the news report against an alleged rift between Prime Minister Imran Khan and his wife Bushra Bibi, and said “this law will put an end to such news reports.”

According to the law minister, a judge will be bound to decide cases pertaining to fake news within six months. In case the judge failed to adjudicate in the given time, a letter will be sent to the respective high court chief justice to seek an explanation from the judge, he added, says a news report. In response to a question, Naseem said the amendments to the PECA law or Article 19 of the Constitution were not unconstitutional as the only purpose of this law was to curb fake news. The ordinance criminalises defamation against civil and military institutions, as well as public office-holders. In another ordinance drafted by PM’s aide Babar Awan, the government amended the Election Act 2017 to allow parliamentarians to take part in election campaigns.

This law will allow lawmakers and others to visit and address public gatherings during election campaigns, which was earlier banned under the election code of conduct.

A day earlier, the federal cabinet approved both ordinances amid criticism that the government wanted to stifle freedom of expression through such laws.

Under the ordinance, the definition of a “person” has been broadened to include any company, association, institution, organisation, authority, or any other. Furthermore, anyone found guilty of attacking a person’s “identity” will now be sentenced to five years instead of three years. The ordinance also states the informant or the complainant shall be “aggrieved person, his authorised representative, or his guardian, where such person is a minor or a member of the public in respect of a public figure or a holder of public office”. Cases falling under PECA will be supervised by a high court and the trial court will have to conclude the case within six months.

“The court shall submit a monthly progress report of any pending trial to the concerned high court and shall give reasons for the inability of the court to expeditiously conclude the trial,” says the ordinance.

Apart from sending the report to the high courts, copies of the progress report will be sent to the law secretary if the case is registered in the Islamabad Capital Territory. However, if a case is registered in a province, then the copies of the report will be submitted to the “provincial secretaries of prosecution departments, the prosecutor general or advocate general”.

The ordinance also authorises the high court to issue “fresh timelines” of a case if it finds the “reasons” given by the trial court “plausible” and beyond its control.

The ordinance also empowers the high courts to summon federal or provincial government officers to remove any “difficulties, hindrances and obstacles” it finds in the case.

If the law secretaries find that the case was delayed due to the “presiding officer or any of its functionaries” then they may inform the high court. If the high court is of the view that the delay in the disposal of a trial is attributable to the presiding officer of the court or any other court functionary then they can initiate or “direct commencement of appropriate disciplinary proceedings.”

The ordinance also empowers the chief justice of every high court to nominate a judge along with other officers.