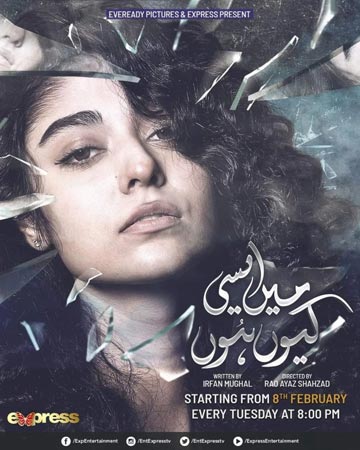 Just when we thought we have seen it all on Pakistani television, drama writers leave us speechless with even crazier and more ridiculous plots.

Qissa Meherbano Ka and Aye Musht-e-Khaak are among the many continuing dramas that have been called out on social media for glorifying violence and reinstating stereotypes. The latest drama to join the list is Main Aisi Kyun Hun whose crazy plot appears to be driven by the lead character’s curly hair. Noor Zafar Khan is playing the wretched housewife Zahra and Syed Jibran her husband, who can’t stand the sight of her because of her “ugly” hair.

The first episode of Main Aisi Kyun Hun opens with Zahra waking up her husband to wish him a happy anniversary, but the smile from her husband’s face vanishes the moment he sees her hair.

“What the hell,” he says. “What is this? I have told you many times to gather your hair before coming in front of me. Ruined the mood early in the morning”

Jibran keeps hating on his wife and throwing a tantrum throughout the episode. In one scene, the couple is at a restaurant with their daughter where two waiters make fun of Zahra’s hair behind her while her husband films them. He then sends the video to Zahra to see it.

It is later revealed that the man was “tricked” into marrying her. “We met probably 40 or 50 times before taking an important decision like marriage. If you had showed up in this state even once in those 50 meetings, I would never have married you.”

Social media has a lot to say about Main Aisi Kyun Hun. Some people don’t have words to express their rage and disgust at the problematic content.