On January 21, Barack Obama was sworn in as the president of the US for the second term. Three weeks later, President Obama delivered the State of the Union address at the joint session of Congress. His address was marked by more rhetoric than substance. He focused on domestic issues and promised immigration reform, enforcement of stricter gun control and overhauling the education system. The President acknowledged the threat posed by North Korea, voiced concern on Iran’s nuclear pursuit and reiterated to stand by the people involved in the Arab Spring. His speech had no reference to Palestine, the most volatile hotspot in the Middle East.

During the campaign in 2008, Barack Obama pledged to shut down the Guantanamo torture centre, wind up the wars in Iraq and Afghanistan, start dialogue with the rest of the world, halt the economic meltdown, introduce tax reform, help the families threatened by foreclosures, respect human rights and enhance the image of the US abroad. On this path, he promised to be driven by a bipartisan spirit.

During the first term in office, President Obama did not shut down the Guantanamo detention centre (GTU). Over 130 prisoners are still detained in the GTU camp. No specific charges have been brought against the inmates nor have they been subjected to any legal proceedings. It is unclear how long these prisoners will remain locked up. Human Rights Watch and Amnesty International have condemned the indefinite detention of prisoners and termed this as a travesty of human rights. The GTU remains the only prison in the world with inmates detained for an indefinite period for crimes unknown to both inmates and the government.

The war in Iraq was brought to a cosmetic end. The troops were brought home, leaving around 19,000 marines to protect the US interests in Iraq. The retreat was hurriedly crafted, leaving the Iraqi government with the mess. Although elections took place, agreement on the share of oil and gas resources and partnerships of ethnic groups in the government were left undefined. This set the ground for ethnic conflicts and violence continues. Hundreds of civilians are killed every month. Iranian political and social influence is very vivid in Mesopotamia, an outcome the US administration never contemplated. The war in Afghanistan does not seem to be ending soon. The Taliban emerged from their hideouts a few years ago and resumed strikes on NATO and US military installations. Convoys with essential supplies for the military came under frequent attack. Despite the Taliban’s successful attacks on military installations, President Obama remained steadfast to withdraw from Afghanistan. The number of troops in Afghanistan has already been slashed to 68,000 and in the next 12 months another 34,000 are likely to return home. The remaining troops are scheduled to leave the battlefield by 2014. The Pentagon is mindful of the proposed slimming down of Afghan security forces to 245,000 due to budget cuts. Given the increasing Taliban attacks, the generals are now inclined to suggest an unspecified number of combat troops to remain in Afghanistan until 2017. Should that happen, US involvement in the Afghan war will continue beyond the second term of President Obama. A coalition of neighbouring countries including Iran and Pakistan is essential to consolidate the social and political gains achieved during the past 11 years. In the absence of any such deterrent, a bloodbath cannot be ruled out in future.

Iran’s pursuit of nuclear capability was suspected by the US. President Obama resolved to contain Iran but did not lay out the strategy. US intelligence confirmed that Tehran has acquired 20 percent enrichment of uranium, far below the level required to make a nuclear weapon. Israel has been making exaggerated claims to provoke military strikes on Iran’s nuclear installations. The Obama administration was browbeaten by Israeli Prime Minister Benjamin Netanyahu and did not engage in direct talks with Tehran. Iran has emerged as the regional power following the transformation in Iraq. What is the wisdom in cultivating hostility against Iran, a country of 80 million people, for the appeasement of eight million Israelis? Joe Biden, the Vice President, has recently signalled his administration’s willingness to engage in direct talks with Tehran. Peace-loving people would curiously watch whether the Obama administration will have the guts to take a new initiative.

In June 2009, President Obama visited Egypt and said, “America’s strong bonds with Israel are well known. This bond is unbreakable. It is based upon cultural and historical ties, and the recognition that the aspiration for a Jewish homeland is rooted in a tragic history that cannot be denied. On the other hand, it is also undeniable that the Palestinian people — Muslims and Christians — have suffered in the pursuit of a homeland. For more than 60 years, they have endured the pain of dislocation. They endure the daily humiliations — large and small — that come with occupation. So let there be no doubt: the situation for the Palestinian people is intolerable. America will not turn our backs on the legitimate Palestinian aspiration for dignity, opportunity, and a state of their own…The United States does not accept the legitimacy of continued Israeli settlements.” This raised high hopes in the Arab street. In the past four years, however, the Obama administration made no tangible efforts to revive the peace talks. The settlements programme went on unabated in the West Bank and East Jerusalem. The US government did nothing to halt the settlements. The US opposed Palestinian statehood, threatened to cut aid, but the Palestinians went ahead. The UN welcomed the Palestinian bid by an overwhelming majority. John Kerry, the newly appointed Secretary of State, has observed that the two-state solution may no longer be an option. This implied a status quo that is a recipe for future explosions.

President Obama, in his State of the Union address, pledged the US will stand with citizens (referring to the Arabs) as they demand their universal rights and support stable transitions to democracy. He promised to keep up pressure on Syrian President Assad to leave office. There is no reason why Arabs will take this pledge seriously, as they still remember President Obama’s commitment in Cairo four years ago and how he drifted away from it.

North Korea remained recalcitrant as before and conducted a nuclear test in December in response to UN sanctions. It carried out an underground nuclear test on February 12. The tremor was felt in mainland Japan. President Obama is in pursuit of a failed strategy here. Sanctions did not work in Cuba for 50 years; they have not worked in Iraq and Iran, and are unlikely to work in North Korea. Instead, attempts should be made to negotiate in an atmosphere free from threats and intimidation, which stands a better chance of success.

The drone strikes in Yemen, Somalia, Afghanistan and Pakistan are being launched in flagrant violation of the sovereignty of these countries. The CIA carried out hundreds of drone strikes that killed over 3,000 people, including civilians. John Brennan, who played a critical role in overseeing the drone campaign, admitted civilian casualties, though downplayed as “exceedingly rare, and much, much rarer than many allege.” Drone strikes against the targets located on foreign soil generated deep anger in the population, in turn would give birth to more militants than the strikes could annihilate.

President Obama, at home, was found deficient in reaching out to political adversaries. The Republicans do not trust him nor could he build a partnership with them. The result has been deep partisanship. It fell on the Vice President to broker a deal on fiscal policy at the last moment on December 31, 2012.

President Obama began the second term with an image badly tarnished at home and abroad.

The writer is a former international civil servant, a former UN official and a freelance columnist. Based currently
in the US, he can be reached at rahman.chowdhury@yahoo.com 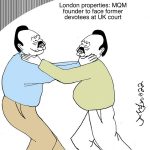