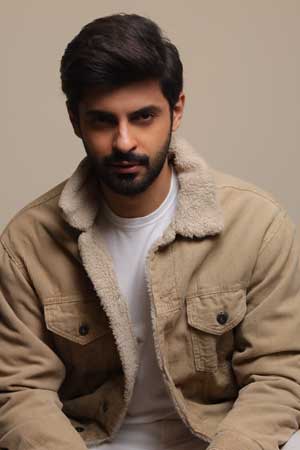 One of the most promising young Pakistani actors and the star of ARY Digital’s immensely popular serial ‘Benaam,’ Saad Qureshi started his career in show business with ‘Khuda Aur Muhabbat’ in 2015. In a matter of six years, Saad has worked in 10 successful television serials and emerged as an actor of tremendous merit and strength. In an exclusive interview with Daily Times, he talks about his career, his goals and aspirations, his marriage, the social responsibility of celebrities and a lot else.

A recent online spat between two Pakistani writers and actors has raised the issue of films needing to have a message. Do you believe that films and television dramas need to deliver a message?

I believe that films are made primarily for the entertainment and pleasure of viewers. They suffer when a filmmaker focuses on an ideology and forces a message on the audience. In my opinion, the story and characters are of paramount importance in films and messages, if any, need to be subtle, unobtrusive, and understated. A capable filmmaker does not ram messages down the viewers’ throats. He entertains, engages, and provokes viewers into thinking. If a movie is made well, individual viewers react to it differently, based on their own different social, ideological, and intellectual characteristics, and find unique, individual messages in the movie. The truth of a great movie is different for different people; it is not absolute, and it is certainly not universal.

‘Khuda Aur Mohabbat’ was your first major television serial. How did you land the role of Kamran?

‘Khuda Aur Muhabbat’ happened after a lot of struggle, cold-calling and knocking on doors. I had moved to Karachi to build a career as an actor and been meeting – to be honest, trying to meet – directors, producers and writers, when Marina Khan, who was at GEO at the time, agreed to a meeting. The meeting lasted all of 15 minutes but changed my life for me; a week after the meeting I became a member of the cast of the second season of Khuda Aur Muhabbat.

The second season of ‘Khuda Aur Mohabbat’ was partly shot in the United States.

Yes, it was and, sometimes, I wonder if I got the part because I happened to have a valid US visa at the time.

You have worked in a number of television serials in the last six years, but it was only in recent years that you achieved stardom. Why do you think it took you so long to establish yourself as a star?

I think it took me a long time to establish myself as an actor because acting is not easy and requires an immense amount of diligence, focus and hard work to learn. Even when someone has inborn acting talent, he needs to work hard to hone his craft.

Do you believe you have inborn acting talent?

Yes, I do, and that has helped me, but it is my patience, determination and perseverance that are the real factors behind my success as an actor. I have worked hard to learn the craft, I have not taken any shortcuts and I have not used any favours to become a successful actor.

What attracted you to acting?

It was my artistic nature and my love of cinema. I have loved watching movies all my life. The allure, glamor and charm of cinema has always fascinated me. As a child, my cousins and I used to reenact scenes from our favourite movies. It was my favourite pastime as a child and, I must admit, I enjoy it even today. Acting is pure magic. It allows you to become a totally different person and lead more than just one life. Actors are fortunate because they can live and experience life as many different people; no other vocation affords one this benefit. The opportunity to become a different person in each new project is one that I value greatly. It is the one benefit of being an actor that I value the most. I love the insight that acting gives me into life and living. It is a great profession.

You seem to be in love with acting.

Absolutely. The word ‘action’ is my favourite one in the dictionary and gives me an adrenaline rush like no other.

How did you learn to act?

It was primarily through observation. I watch films very carefully – to make an understatement – and pay a lot of attention to the work of actors, both good and bad. They teach me what to do and what not to do. I also watch my own work with great attention – often repeatedly – to see what I do well and figure out areas where I need to learn more and improve. In recent years, I have developed an interest in the various schools of acting and find myself spending more and more time learning about them.

I do not subscribe to any one school of acting but borrow elements from most of them, especially Meisner and Stella Adler. I also find Spolin’s ‘theatre games’ intriguing and want to work on a project where I can use them to improvise and explore my capacity for creative self-expression.

What do you think of yourself as an actor?

I think I am a competent actor. I am focused, I am disciplined, and I work very hard to do justice to the characters I play. That being said, I believe that I have a long road ahead and a whole lot to do to establish myself as an actor of merit. I am confident that as I learn more about acting, further explore the actor in me, work with talented writers and directors, and pick the right projects, I will emerge as an actor who is known all over the world.

Do you enjoy being an actor?

Yes, I do. I love acting and derive genuine pleasure from the craft. I enjoy the popularity, admiration and adoration that comes with being a successful actor.

What is the downside of being an actor in Pakistan?

It is the fact that there is little, if anything, done to protect the rights of actors. A lot of actors, especially ones who are new in the industry, often do not get paid fairly and rarely on time. Residuals are not paid in cases of reruns, syndication, DVD release and online streaming.

There are organisations, such as the Actors Collective Trust, set up to protect the rights of actors.

The government should take care of all Pakistani citizens. I speak about artists because I am one and want to bring my problems to light.

You recently worked in the Over-The-Top Media Service (OTT) drama, Abdullah Pur Ka Devdas, for Zee5. How is acting in an OTT project different from acting for a television channel?

I enjoyed working in Abdullah Pur ka Devdas immensely but did not find acting in the OTT project to be different from working in one for television. I think OTT will grow in popularity greatly, in coming years, but do not see traditional television going away anytime soon. I intend to work for both.

A lot of Pakistani actors work as models as well. Why have you not done that?

I do not have an interest in modelling; acting is my true love. I want to keep a singular focus on acting and excel in the field. Modelling, walking the ramp and other similar work can be both fun and lucrative but it is not for me. I am an actor and I want to remain one.

Are good looks essential to becoming a successful actor in Pakistan?

I think they used to be essential but are not necessarily needed today. We have evolved as an industry and directors now value histrionic talent more than good looks.

How much effort, energy and time do you put into looking good?

Very little. I am more concerned about learning my lines, understanding the characters I play, and delivering well as an actor. That is where all my effort, energy and time is focused.

You announced both your engagement and marriage in the press. Were you concerned that the announcement would negatively affect your popularity amongst your female fans?

A few friends had advised me against making the announcements, but I did not want the story to come out as a result of leaks. Marriage is an honourable institution and I take pride in the fact that I announced mine with honesty and dignity. As far as my marital status negatively affecting my popularity amongst female fans, the opposite has been true. My female fans appreciate the respect I give to my wife and often tell me that it is one of the reasons they love me.

Do you enjoy being married?

Yes, immensely. I have known my wife, Misha Chaudhry, since my childhood. We understand each other very well, share a common set of values and morals and enjoy the same activities. The marriage has been wonderful.

What makes a marriage successful?

Two things – love and respect. A marriage is successful when you give each other both.

You work with some of the most attractive females in the industry and are known to be charming and flirtatious. How does your wife take it?

Very well. She has never shown any jealousy or suspicion. Now that you mention it, I wonder why she does not feel a need to be concerned. I need to ask her that.

You and your wife have set up a charitable organisation named La Ayuda. What does it do?

La Ayuda is an online child sponsorship program devoted to taking care of underprivileged children all over the world by focusing on health, education, security, emotional well-being, and quality of life. The funding comes from donors who are given an opportunity to tailor their donations, based on their own individual goals and beliefs. The charity, which has been featured in the New York Times, is known for having a simple, transparent and customizable process for receiving, processing and using donations.

Do celebrities have greater social responsibility than others?

I do not think they have greater social responsibility than others, but they certainly have more influence. Star power is very potent and can be used to motivate, inspire and arouse people.

Should celebrity status be used to bring about positive social change?

Absolutely. It would be a terrible waste not to use one’s celebrity status and fame to bring about positive social change. A tragic, tragic waste!

What do you plan to accomplish as an actor and a human being in the future?

I want to become an actor who is known, all over the world, for his histrionic skills, individuality, versatility and body of work. I want to represent Pakistan, as an actor, on a global level. As a human being, I want to do my part in making the world a little – if not a lot – better by embodying and promoting values of empathy, benevolence, kindness, compassion, understanding, and tolerance. That’s it; nothing more, nothing less.

The writer is based in Dallas, US and Tweets at @allyadnan. He can be reached at allyadnan@outlook.com