* Kartik's dedication to being the ambitious Arjun Pathak, who is selfish yet empathetic, is not just a big shift from what we are used to seeing the actor do, but proves that he has so much 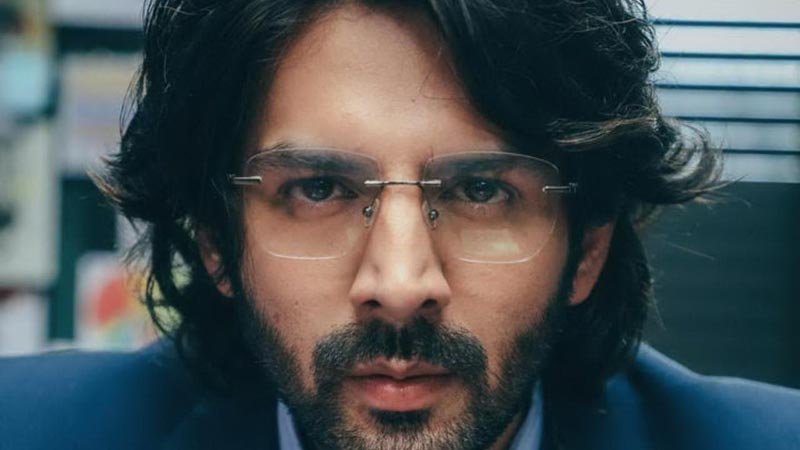 Intense, riveting and honest performance as the hardball journalist Arjun Pathak, Kartik Aaryan’s 2.0 act in his latest outing ‘Dhamaka’ is everything that you wouldn’t have expected from the actor. Kartik, who won over the audience’s hearts with his boy-next-door charm and shot to fame as the monologue king, dabbling between romcoms like ‘Pyaar ka Punchnaama’ and its sequel, ‘Sonu Ke Titu Ki Sweety’, ‘Pati Patni Aur Woh’, ‘Luka Chhupi’ among others, delivers a passionate performance. Kartik’s dedication to being the ambitious Arjun Pathak, who is selfish yet empathetic, is not just a big shift from what we are used to seeing the actor do, but proves that he has so much more to offer. He convincingly plays a determined television news anchor desperately wanting to win back his primetime seat and his lost glory, but his choices are limited. And that’s the beauty. It’s here where we get to see Kartik’s range of emotions. And now that he has stepped into a different genre, seems like his fans will be wanting more.

Helmed by national-award-winning director Ram Madhvani, who has delivered hit projects like ‘Neerja’ and ‘Aarya’, both of which turned out to be game-changers for the lead stars Sonam Kapoor and Sushmita Sen, respectively, with ‘Dhamaka’ too, the filmmaker has attempted to present a never-seen-before avatar of Kartik Aaryan and succeeded.

The film begins on a romantic note with Arjun Pathak recalling the lovey-dovey time he had spent with his wife Saumya Mehra Pathak, essayed by the talented Mrunal Thakur.

In the background, the soothing voice of Prateek Kuhad and soulful lyrics capture your attention and heart. The sequence is an emotion in itself and makes you fall in love with Arjun and Saumya’s small, love-filled world. But it’s not all hunky-dory in Arjun Pathak’s life as he is about to get divorced.

Why? Well, all of it is answered as the story progresses.

A prime-time anchor on a popular news channel demoted to be a radio jockey in the same media house, Arjun Pathak is a driven individual who would do anything to get his primetime slot back!

Based on the South-Korean film ‘The Terror Live’, it’s when a random caller, Raghubir Mhata, threatens to blow up the Mumbai sea link bridge and Arjun Pathak – the radio jockey, having not taken him seriously at first, realises that it is not a hoax and that his exclusive interview with the terrorist, who in the end turns out to be a common man is the trump card that would help him get his prime time seat back, that the story of Dhamaka unfolds.

Up until this point, the film’s plot will keep you on tenterhooks and Kartik’s performance as the primetime slot hungry news anchor will make you want to ask for more. However, it’s just when you start expecting from the film that it disappoints.

Over-dramatised sequences, dry dialogues and a certain stagnation script per se from where you don’t see the plot moving further and rather only hear Arjun Pathak trying to unconvincingly convince Mhata to not carry out further explosions that could cost innocent lives, that you start losing interest. However, Ram Madhavi’s genius direction skills will make you want to sit through the 1-hour 43-minute film.

However, some portions of the film seem unnecessary and elements of major twists seem missing when the viewer is expecting them the most.

It’s rather a steep downfall for ‘Dhamaka’ that began on a high note.

Nonetheless, it’s not a film you wouldn’t want to watch.

Arjun Pathak’s dilemma while he is reporting a terrorist attack from a newsroom and negotiating with the man who is responsible for it, his helplessness while his wife, the righteous journalist Saumya Mehra Pathak reports live from the site and helps hostages, will keep you engaged throughout. Mrunal Thakur’s short performance is impactful whereas Amruta Subhash is Kartik Aaryan’s assertive boss who only cares about the TRPs and plays him to the gallery to climb another ladder of success.

And even though the script and dialogues lack at some points in the film, Ram Madhvani’s direction in the restricted space of one newsroom while capturing every heightened emotion during a breaking news scenario through multiple camera setup is fabulous.

Dhamaka shows you the marvel of Ram Madhvani’s direction yet again.