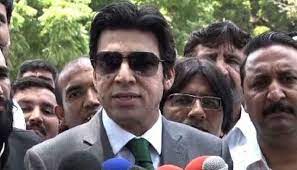 The former federal minister and senior PTI Leader Dr Faisal Vawda has demanded on Monday that Rana Shamim who is the former chief justice of Pakistan, should be flogged and hanged in public.

Rana Shamim had levelled serious allegations against the former chief justice of Pakistan Justice (retd) Mian Saqib Nisar, alleging that he had been witness to Nisar issuing directives to a high court judge to not issue bail to former prime minister Nawaz Sharif, his daughter Maryam Nawaz before general elections 2018.

The minister, speaking during a private show, lashed out at Shamim, saying that judges “tremble” while issuing verdicts against hardened criminals but freely issue statements otherwise.

“The nation has witnessed this in Peshawar where scores of hardcore criminals were released,” he lamented.

He said that the retired judge should be flogged and hanged in public, adding that the judges who malign the judiciary and the courts should be treated in this manner.

The PTI senator said judges such as the former chief justice of Gilgit-Baltistan were paving the way for chaos in society. He said this is why it is important to punish such judges.

Vawda raised doubts over the former judge’s allegations, wondering why he had not come forward at the time of the incident. He said that there are many people in several departments who come forth with scintillating allegations after retirement, dubbing them “shameless and disgraceful.”

He turned his guns on Shamim again, describing him as “an absconder for filing an affidavit in London after retirement.” Referring to Justice (retd) Saqib Nisar, the PTI leader wondered how Pakistanis would feel after witnessing “honest judges” being maligned in such a manner.

He said some elements acting on behalf of hostile countries were maligning Pakistan’s institutions and pitting them against each other. He listed Justice Shaukat Siddiqui, Judge Arshad Malik, and now CJ Gilgit-Baltistan Rana Shamim of the same ilk, alleging that money had stirred their conscience.

He said that the PML-N supremo had appointed him in 2015, and his son was also appointed to the post of advocate general.

Vawda said that a person, appointed during the Nawaz Sharif government, who was scared of giving verdicts against hardcore criminals, must now be punished for making sweeping statements against honest judges for “tainting” the whole judiciary.