For photographer Fatimah Haroon, success is a journey, not a destination!

* Fatimah, soon after being praised for her artistic and modern vintage touch in capturing moments, established her own photography enterprise, which she called 'Fatography' 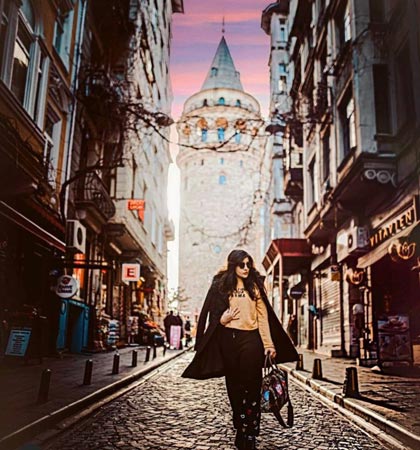 Fatimah Haroon is an immensely talented, young photographer who has captured everything from the 2018 New York fashion week to Pakistan Fashion week.

About how she didn’t conform into the society and choose from the few regular options given to her. She began working really hard towards her goals by 2012 she was taking workshops, coming into the news, working with well-known magazines and so much more whilst being a student. Which didn’t only inspire the ones around her but also gave a lot of hope young female artists that it’s okay for them to practice their art, with hard work, perseverance and keep their aims high in the sky. Just like Fatimah believed that there was absolutely nothing impossible to achieve. She got to the one of the top three arts University Central Saint Martins for her Bachelors where she was able to figure out that she has a learning disorder known as dyslexia and dyspraxia. This only made Fatimah understand that it wasn’t due to lack of hard work that Ms. Haroon put in her studies that brought average or unexpected grades but her disability to write perfectly during exams during O and A Levels. Finding out about her motor disorders didn’t leave Fatimah upset at all. It was then, that Fatimah decided to make her weaknesses into her strengths, she worked day and night only to prove to no one but herself that no hurdle in life can stop her from achieving her what she wants. Her life moto after that became, why not? So to every new thing she wanted to try, work on or practically produce films. Hurdles came, She just said, why not? There’s always a silver lining behind the grey skies and she moved on.. with Fatimah’s “Why Not” attitude she didn’t only make a name for herself at young age but also inspired many others without ever using her disabilities as a victim card

Fatimah soon after being praised for her artistic, modern vintage touch in capturing moments, established her own photography enterprise, which she called “Fatography”. At the young age of 17, Fatimah was given the opportunity to judge various media competitions and also deliver lectures on topics that ranged from Modern Cinema to General Photography at some of the leading schools in the country, including Gulam Ishaq Khan institute (GIK) and the National University Science and Technology (NUST).

During her teenage years, Fatimah worked with notable Pakistani television directors during the making of drama serials and also shot with some of the biggest names in Pakistan’s media industry.

Later at the age of 20 she was diagnosed with dyslexia, which is a learning disability. She also has a genetic disorder called Ankylosing Spondyilitis, which is inflammatory arthritis that affects large joints as well as the spine. She did not let these issues affect her work or her dreams. She continued doing what she loved and started making a name for herself in the field of photography.

In 2012, Fatimah went on to graduate from the University of Birkbeck in London, where she majored in Psychology, International Relations and Media Studies. In 2016, she went on to complete her higher education from the University of Arts, in London. During her post-grad in Birmingham, Fatimah continued to work remotely for the popular Hollywood Director, Joanna Lipper in her company Vertumnus Production.

During her Masters she was granted the opportunity to get weekly placements around International Film Distribution and Marketing companies such as Lionsgate, Eentertainmnet, Pathe, Sony Entertainment, Cinelab, Vue Cinemas and many more. All the exposure helped her to learn as well as understand the history alongside how with trends and times are constantly changing with Direction, Cinematography, Productions, Sound designing and camera tricks in film.

The young photographer has worked with various high-end companies such as Samsung, Infinix, Vertumnus Production UK, Limelight UK, IDEAS, HELLO Pakistan, and Kew Media. Fatimah has also worked as a manager in different marketing and e-commerce agencies. She is extremely passionate about content creation and digital marketing, always looking to learn more related to most cutting-edge mythologies in web marketing.

Fatimah has also worked on major telefilm as well as film projects with renowned directors such as Anjum Shahzad. She also attended the Cannes Film Festival where she worked with various A-listers such as Aishwarya Rai, Deepika Padukone and Sonam Kapoor. One of her most recent projects includes a film starring Siddharth Malhotra.

Fatimah expanded her business, Fatography using social media tools, in particular using Facebook, Instagram and that helped her win hundreds of projects, broaden her service and grow her following.

Her creates of all types of content and also offers a range of diverse services such as Direction, Photography, Public Relations, Cinematography, Managing Celebrities and Editing. Only a few Pakistanis have been able to develop their skills and talent and achieve such huge success at such a young age on the international level. She has not only made a name for herself but has also made Pakistan proud.

She is definitely an amazing role model for girls and women in Pakistan. Pakistan is a patriarchal society, where women do not have the leisure of following their dreams.

Women like Fatimah are an example of how strong and talented girls can use their gifts and excel in life. The young photographer knew what she wanted from an early life and she followed her passion. She escaped the gender biased system of the country and competed head to head with prominent male photographers. She broke stereotypes with determination and courage and did not pay heed what people would say.

Fatimah Haroon became the youngest female photographer of Pakistan at the young at the young age of 15. She travels the world and makes her country proud showcasing her talents everywhere she goes. She hustled in order to achieve her dreams and has taken ownership of her own life.

Girls in Pakistan should take Fatimah Haroon as an example and know that they too can make a name for themselves and follow their dreams, just like she did.

The writer is an NFTs enthusiast, working in an IT company as VP Web Development. He can be reached at contact@salmansabir.com and Tweets at @salmaansabir