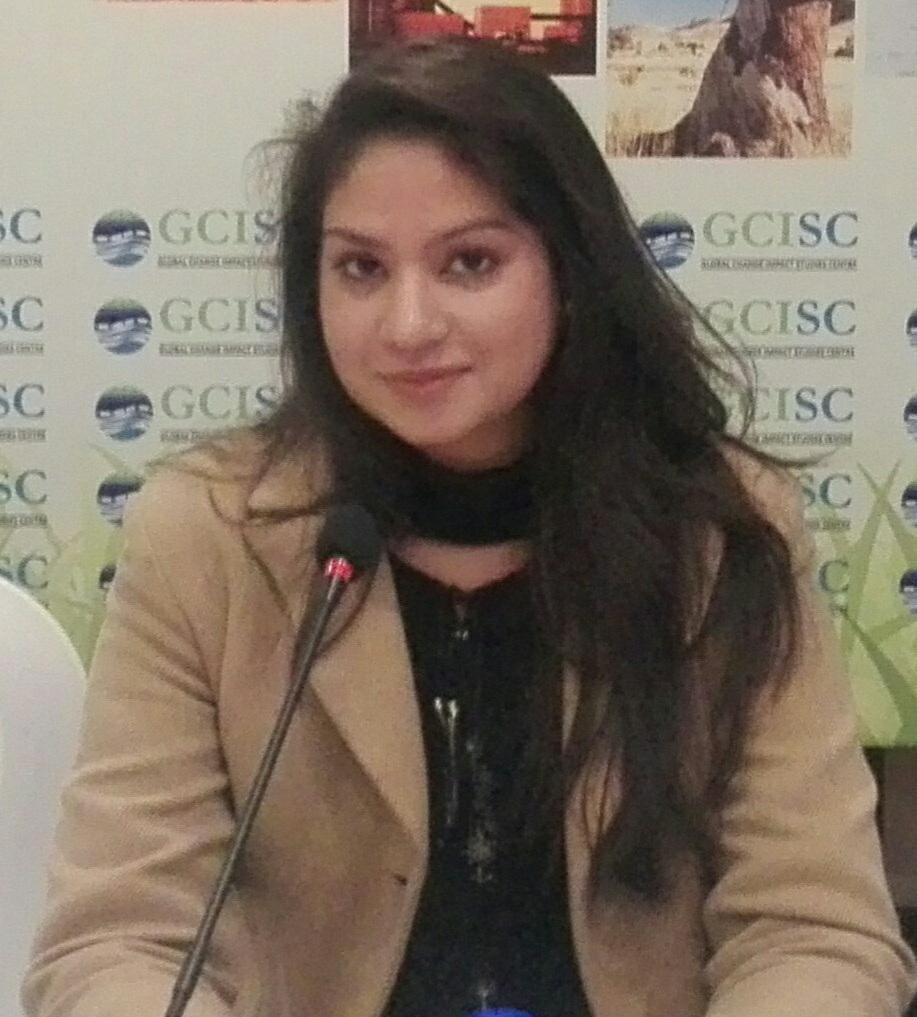 The constitution of Pakistan is obliged to protect the rights of various religious minorities living here since partition. According to the Census of 2017, these minorities constitute approximately 3.53% of the total population.

Article 25(1) of the constitution of Pakistan states that all citizens are equal to law and shall be given equal protection rights. Article 5 provides religious freedom for minorities. It also provides the right to free speech and assembly, allowing minority voices to be heard. But, when it comes to practical approaches, no such implementation is seen. They are living in a vulnerable condition and are subject to faith-based violence, gender discrimination, misuse of blasphemy laws, hate speech, intimidation, and discrimination. The research conducted by the Violence Register Pk is evident of all the challenges faced by minorities. 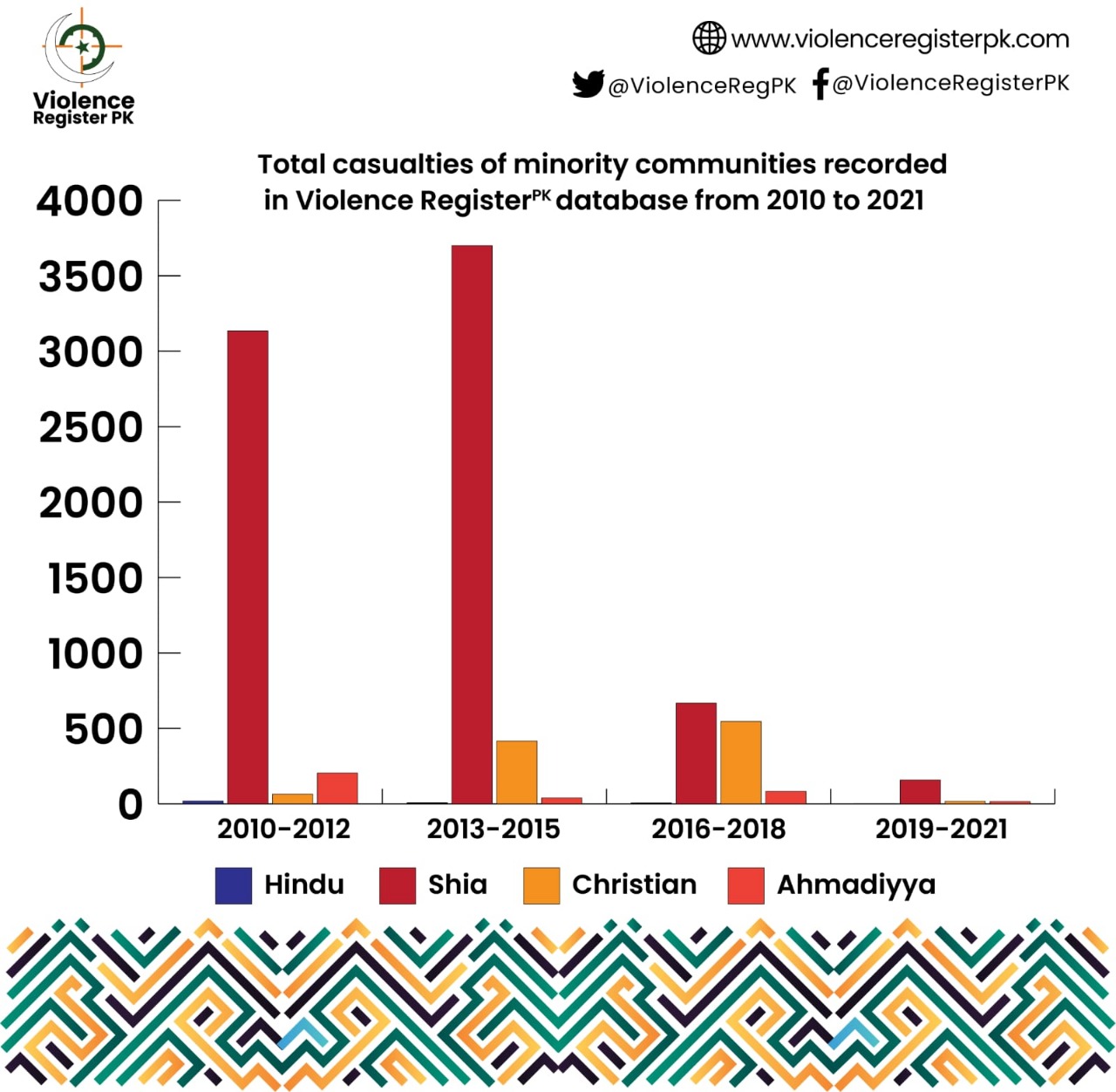 Violence against Shias in Pakistan:

Shia community is one of the largest Muslim sects which has been a constant target of bomb blasts, murders, mob violence, and blasphemy allegations. They live under the fear of violence and prosecution, and their lives are far from being free or protected. Evidence collected by Violence Register PK shows that 66% of all faith-based violence in Pakistan is against the Shia community. This community is a target of slow-motion genocide and is persecuted in Pakistan by religious propaganda. Despite constitutional commitments and peace talks, this community and other minority groups are facing violence.

Statistics gathered between 2000-2020, Country Policy and  Information Note by the UK home office depicts that 365 attacks have occurred against them. On the other hand, Violence Register PK has recorded  273% more attacks during the same period. Here the question arises that what is the use of constitutional rights and protections when there is no implementation at a national level? The government, Human Rights Commission of Pakistan, and peace-making bodies should take action against such acts. There is a dire need for policy implementation and protection of the rights of minorities in Pakistan. 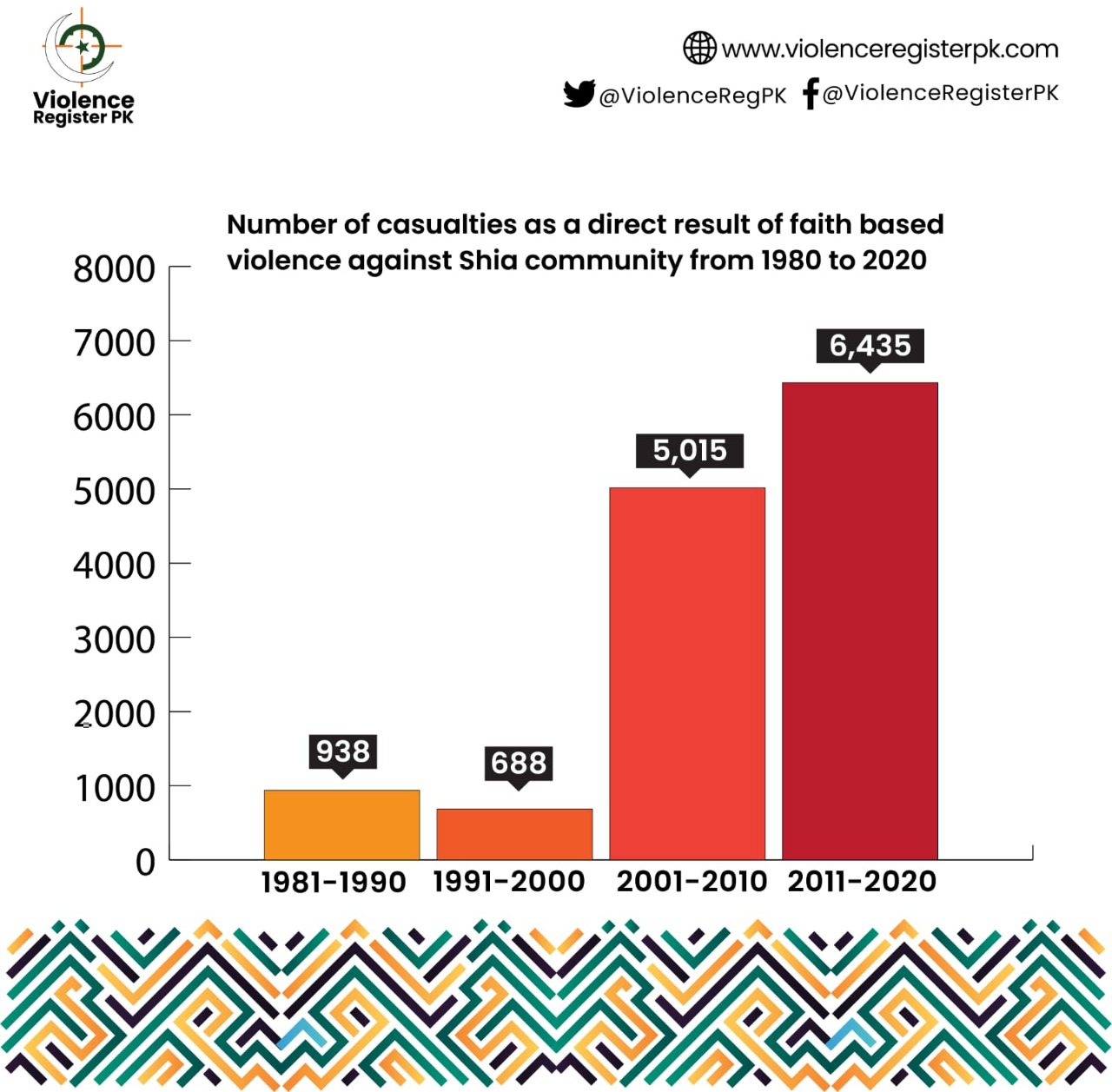 Violence against Hindus in Pakistan:

The research and evidence show that the Hindu community has also been marginalized and discriminated against for decades. The challenges encountered by Hindus in Pakistan are also a matter of concern. This community is almost living in all the provinces of Pakistan, but a significant population is living in Sindh. They are not only targeted due to their faith but are also deprived of many other fundamental rights as well. They are concerned about their lack of access to education, employment, and basic necessities.

Just recently, a mob attacked and destroyed a Hindu temple in Rahim Yar Khan, Punjab. The fear prevailed all around, which led many Hindu families to vacate the locality to save their lives from attackers. Ravadar blogs have also reported this incident here. Unfortunately, it is not just one incident; there are several others in a row.

Violence Register PK gathered data from 2010-2021, which has mapped 205 such incidents against Hindus, specifically attacks on worship places and people. Cases of rape, misuse of blasphemy laws, forced conversions, and abduction occur frequently. Therefore, Pakistan needs to spread awareness regarding minority rights and engage political and religious leaders in policymaking. It is vital that platforms for interfaith dialogue should be available for Hindu communities to communicate their issues, and the national education curriculum should teach inclusive values. 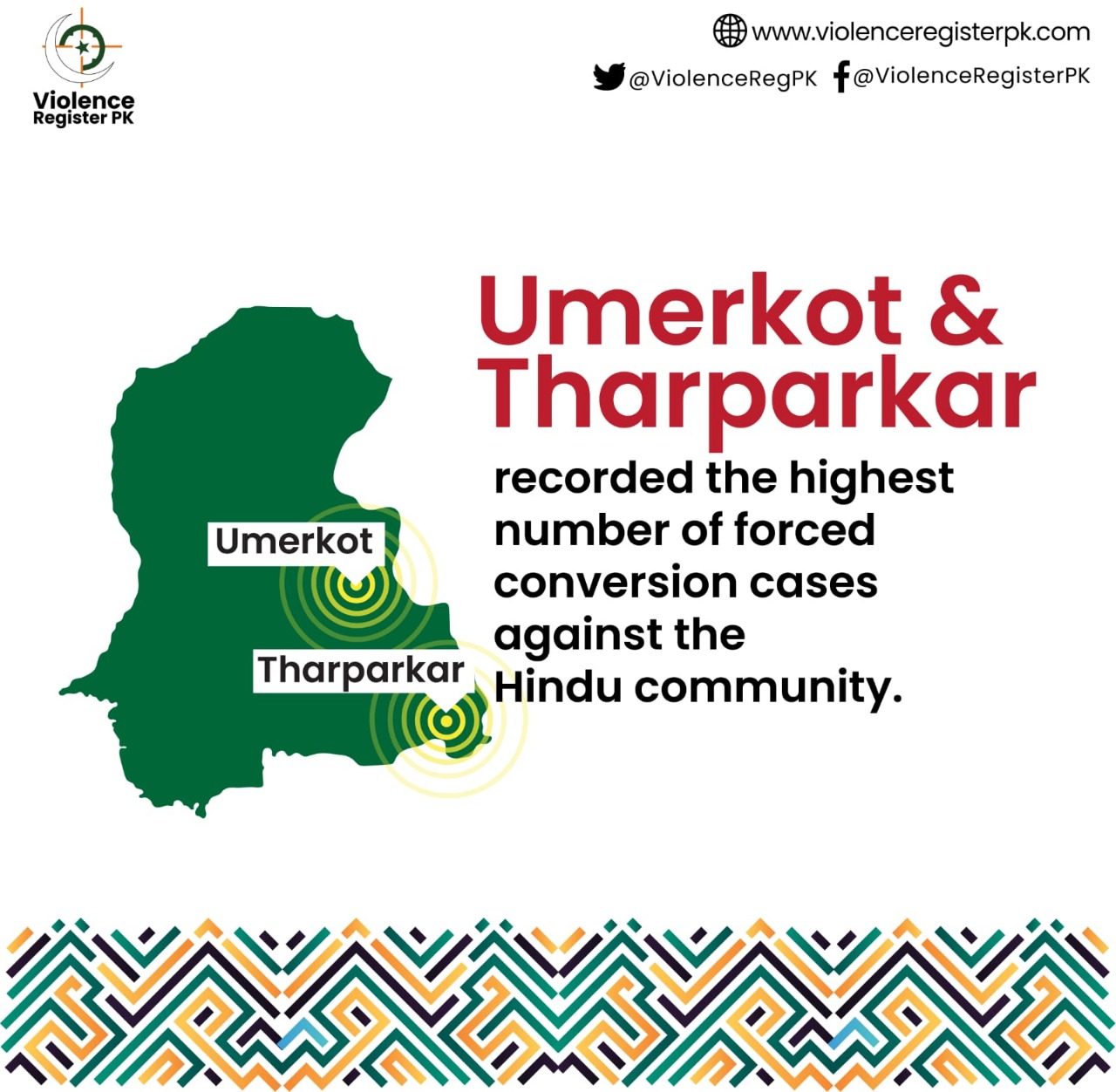 Violence against Christians in Pakistan:

Christians in Pakistan constitute a significant portion of minorities, but they are treated as second-class citizens. They are deprived of jobs, education and neglected in every sector. Christian girls are at a threat of abduction and forced conversions. Discrimination against the Christian community is prominent everywhere, either in offices, schools, or other public spaces. They are frequently targeted in cases of blasphemy, discrimination against women, and hate speech. When the government advertises jobs for sanitary workers, it often mentions that low-ranked jobs, mainly janitorial positions, are allocated explicitly for non-Muslims and Christians. Moreover, the so-called five percent quota to get jobs in the government sector and even in the education sector has never been adequately implemented.

Approximately 304 incidents, attacks on worship places, target killings, kidnapping, rape, mob- violence have been mapped by the Violence Register PK from 2015 – 2021. Law enforcement agencies should take measures to counter violence and radicalization against the Christian community. 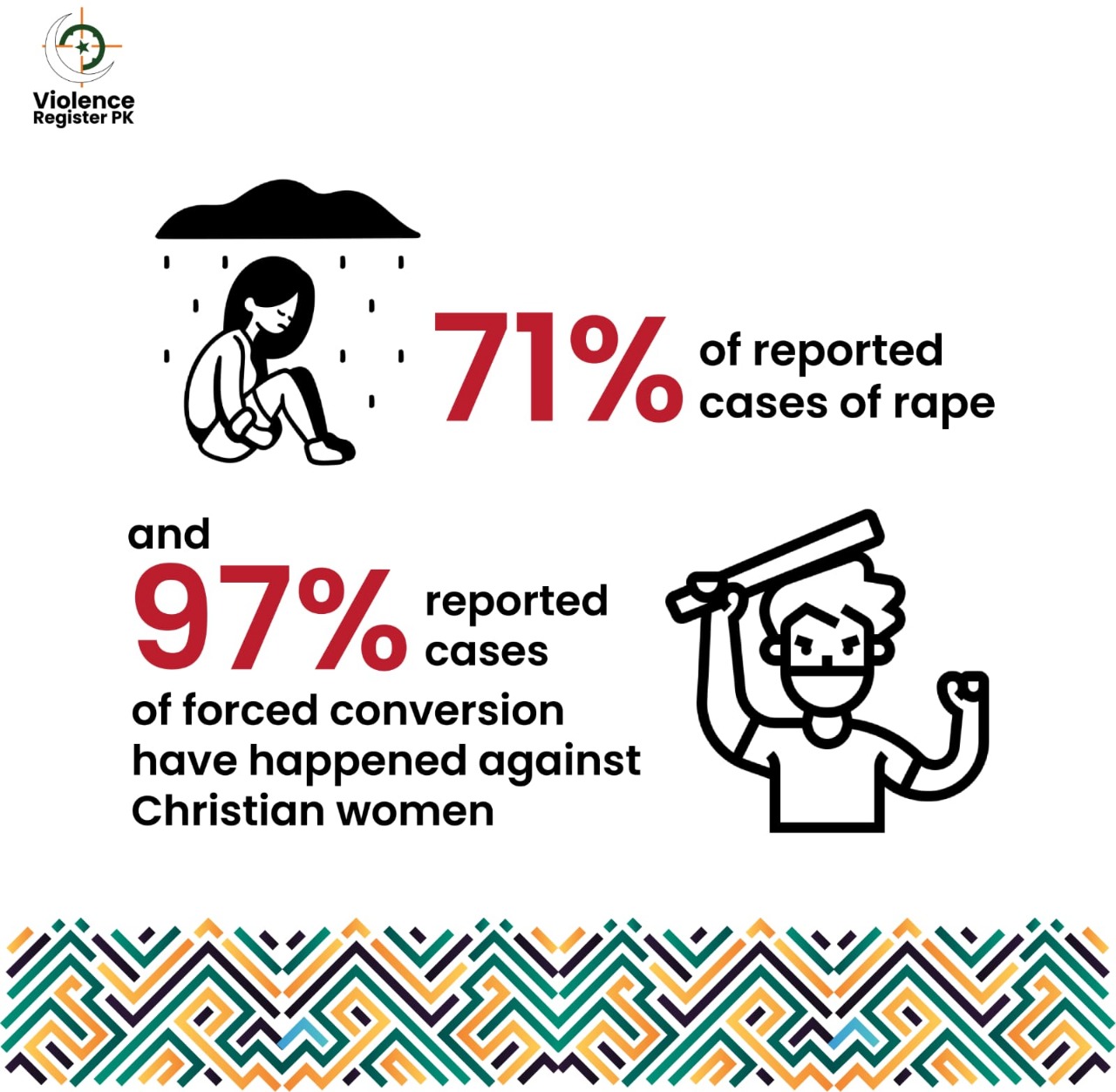 Violence against Ahmadis in Pakistan:

According to the research and data gathered by different NGOs and news, the Ahmadiyya religious community also faces violent attacks in Pakistan. This community endures the worst kind of discrimination. Due to the constitutional amendments passed in 1974, Ahmadis have been declared non-Muslims. Violence Register PK conducted evidence-based research and mapped 121 incidents, target killings, and blasphemy between 1963 – 2015.

Extremism against Ahmadis has been rising for decades, and they are persecuted because of their faith. The government has failed to protect the rights of Ahmadis, due to which the number of mass murder and killings are rising. Pakistan should make efforts to promote peace at the national and international level by securing the rights of minorities living in it.

This blog is produced by Ravadar – a blog series documenting the lives of religious minorities.