Digital format has made experimentation much easier: Ayesha Jalila

* 'Since the beginning, my mother had instilled in me that I had to be independent and self-sufficient' 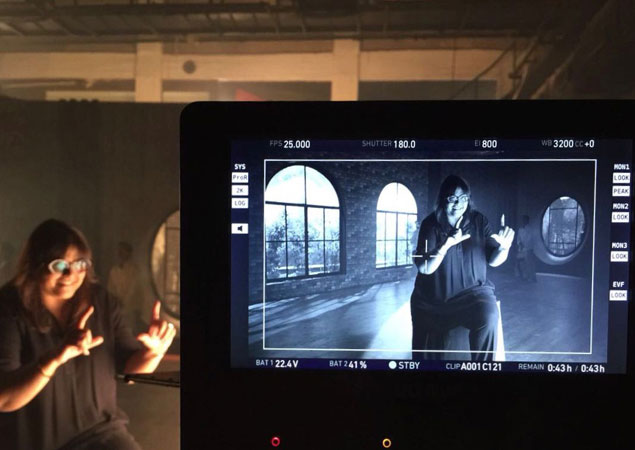 In conversation with director and producer Ayesha Jalil, the owner of Y Productions, who is shattering the glass ceiling.

What inspired you to choose the career path of becoming a director/filmmaker when you started off over a decade ago?

I’ve never actually considered myself a female director. I’ve just been doing what I love to do. And filmmaking was a profession I just stumbled upon. I was actually just thrown into the deep end. I was working as creative manager at Spectrum Communications and out of the blue, my boss assigned me to direct a documentary on drug addiction. I had no clue what to do. But we managed to pull together a good film. And I discovered that I had a potential knack for this. It never struck me that this is a man’s domain and I’m venturing into this territory. I’ve always found it interesting to see how people tick, and how we can use the mode of filmmaking to evoke certain emotions and reactions in an audience. It’s a powerful tool. But henceforth I hope I can pave the path for other young women and give them an even playing field. Something which is very much needed.

What were some of the challenges you faced at the beginning of your career?

I started as an independent director in the year 2000. At that time there were barely any female directors in my field. In fact, barely any women in film production at all. I used to travel around the country with a crew of 60 men or so. At that point I didn’t give it much thought. The idea was to get the job done. Also the fact that filmmaking was very much a man’s domain. Obviously as a woman I could never get entry into the boy’s club, where the actual negotiations and deals were closed. It’s a clique. And as a woman one has to prove themselves again and again to survive, even to date. However, the entry of more women in the industry at large, is starting to level the playing field.

How did you overcome those challenges?

I think its conditioning. Since the beginning, my mother had instilled in me that I had to be independent and self-sufficient. And both my parents had built that confidence and trust in me, so that I never really gave it second thought that I was the only woman working with an army of men. Also, I found a core team of men who were my strength on set. Suleman Razaq, who is Pakistan’s foremost DOP and Zulfi Ali, who was my production manager at the time, both were forces that created a secure environment for me. I can sit and complain about the Boy’s Club, or i can continue doing what I’m doing and they eventually have to recognise you as a force to be reckoned with. As more and more women join the industry the influence is naturally getting diluted and the market is opening up.

How do you think the industry has changed over the years and has it made things easier or more difficult for upcoming female directors?

So much has changed. The digital format has made experimentation much easier. Production has become more affordable, so more local brands are spending on marketing budgets. And though production budgets have become less, it’s giving an opportunity for new talent to explore the field. A lot younger people are getting trained in filmmaking and coming into the industry. Women are taking on different roles. Where I used to be the only female on set, now there are multiple from different fields. These are exciting times. We’ve got a number of kickass female producers, now is the time for female directors and DPs to step up to the plate.

Which particular piece of work of yours are you most proud of/you think is your biggest accomplishment so far and why?

The most challenging project I did was for USAID. It was a pan Pakistan film and I was the producer and director on that. What an eye opener it was. It was a mega shoot in three provinces, across five days. We got to explore different parts of Pakistan, engage with local villagers, got them to participate and act in the film. For the village people just the fact that a woman was commanding a team of a hundred men, was something they couldn’t fathom. We were nearly engaged in a mob attack and my production team had to evacuate me to a nearby house for security. Apart from the experience of the shoot, I love the end product too. It captures the vibrancy of Pakistan and the charm of the characters we discovered on the way.

What is one thing you would want to see change for the better in the industry?

A level playing field. There’s a lot of money involved in advertising production. And there’s a lot of wheeling dealing happening behind the scenes. I would like to see open bidding and equal opportunities.

Any advice for upcoming talent/women who’d want to enter this field?

I feel Impostor syndrome is a real thing where we women are concerned. And overcoming that was initially my own challenge too. It was overcoming the mindset. Despite the fact that I’d been working on multinational projects for a few years, and I’d done workshops in the US for acting for directors, filmmakers craft, directing TVCs etc. I feel I still didn’t really embrace myself as a filmmaker until sometime later. It’s important that us women embrace our talents and forge ahead.

What are some of your upcoming projects that you’re working on these days?

As a director, there are a few ads for multinational brands in the pipeline. But kids content is something close to my heart and I feel we can bring about change in society by engaging kids in positive entertainment. We are working on a mega reality show competition for children, which will be unveiled soon. Also, I am working as a Creative Producer whereby I bring on my experience to projects directed by upcoming directors.

Name someone you really enjoyed working with and revere from the industry?

Undoubtedly Nabila has been a great influence on me. Her philosophy and approach to business is inspiring. Despite not knowing me at all, she is the one who reposed confidence in me and helped me get my first project, after seeing my starter show reel. I learnt two key things from her which I try to follow: Evaluate yourself honestly. Figure out your weaknesses and then get the best tools/ people to plug the weakness, encourage and support talent wherever you see it. There’s always much to learn from anyone one interacts with.

What would you consider as a milestone for yourself being a woman filmmaker in the next few years?

Of course as is any filmmakers dream, I’m working on a script for my movie. It’s a story I’d written a few years ago. A coming of age, woman centric, thoughtful chick flick. I hope to be directing that.