* The plot centres on Christine Donovan who, 20 years ago, accepted a call she should have ignored while shopping 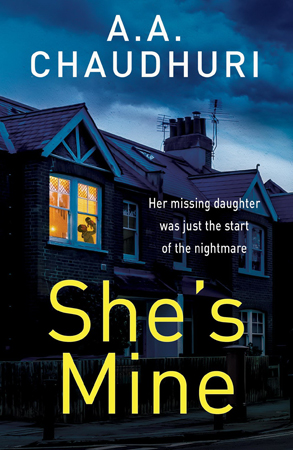 Having written two gripping and highly original legal thriller/police procedurals with The Scribe and The Abduction, She’s Mine is AA Chaudhuri’s first venture into psychological thriller writing, a genre that suits her writing style to perfection.

Meticulously plotted from start to finish it ticks all the boxes in terms of what every fan of this genre is looking for – a compelling story, complex, troubled, unreliable characters, and not one but a series of mind-blowing twists culminating in the most’ jaw-dropping’ end twist as the publisher, Hera Books, rightly describes.

The plot centres on Christine Donovan who, 20 years ago accepted a call she should have ignored while shopping. In the few seconds while her back was turned, her toddler, Heidi, was kidnapped and she’s never been seen again. Christine remains guilt-stricken that inattention caused her child to be stolen, while being hunted by a secret that consumes her. Then a note is pushed through her door, with the words she’s always longed to hear: Heidi isn’t dead.

Although child abduction isn’t ever an easy topic to address, there are so many layers to this story tackling various themes including infidelity, revenge and betrayal, while told through nine separate narratives which alternate between past and present. As a reader you don’t find yourself dwelling too much on this one particular harrowing subject, but rather the other threads of the story which cause you to be suspicious of every character and keep turning the pages furiously to get to the end.

What I loved about this book is that although I had my suspicions just because Chaudhuri drips feeds in various clues and red herrings along the way, I was still left gasping as the various revelations were revealed and as mentioned previously, found myself in a state of shock with the final twist which made me question everything I had just read.

The first-person present tense narrative, told from multiple perspectives, really keeps you in a state of tension and on the edge of your seat while generating a sense of urgency and enabling the reader to really get into the mindsets of each character which is key to this genre.

Although, child abduction isn’t ever an easy topic to address, there are so many layers to this story tackling various themes including infidelity, revenge and betrayal, while told through nine separate narratives which alternate between past and present

Each chapter moves between a different character’s viewpoint, between the past and present allowing the reader to learn their backstories and therefore what is motivating them in the present. This gives a richness to the plot and succeeds in ramping up the tension and intrigue even more, as does the short, sharp chapters, which Chaudhuri more often than not ends on stunning revelations that keep you wanting to turn the pages and put aside ordinary life.

Another highly original element to this unique psychological thriller is that each of the narrators talks to another key character as they tell their story. It is a testament to Chauduri’s skill that it was clear in each chapter who that ‘you’ was, whether that be Christine, her husband, her daughter and so on, and this only further enhanced the prevailing sinister atmosphere and my inability to put the book down.

This is a pacey, twisty and gripping thriller that caused me to have my heart in my mouth from start to finish, and for me really stands out from a saturated market due to Chaudhuri’s unique take on the genre, and her ability to really get inside the minds of her characters in a way that makes you feel you’re living every moment with them – experiencing their turmoil, grief and conflicting emotions – and making you doubt every one of them with a series of clever hints and revelations at just the right moment.

Fans of Shari Lapena, Louise Doughty and Gilian Flynn will love this!