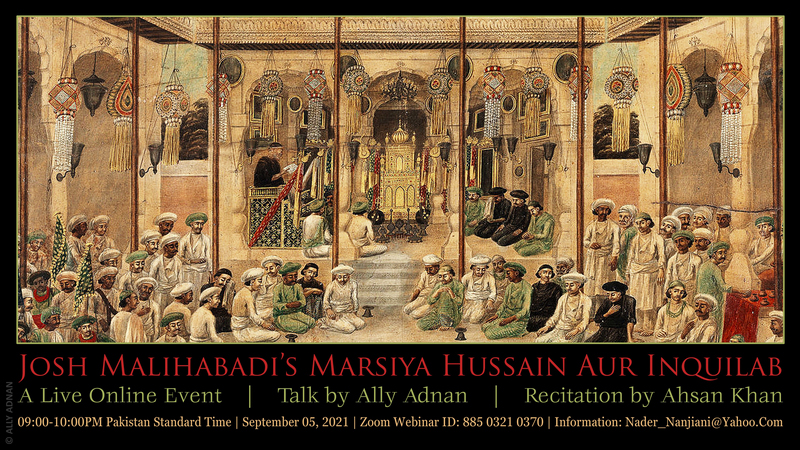 Renowned actor and show business personality, Ahsan Khan is set to appear in a scholarly webinar on marsiya together with celebrated writer and cultural commentator, Ally Adnan, on the 28h day of the Islamic month of Muharram.

Titled Hussain Aur Inquilab, the live online event will consist of two parts. In the first part, Ally Adnan will provide an overview of the institution of marsiya, covering its evolution from pre-Islamic Arabia to present times. His talk will cover a number of topics related to marsiya, including poetics, performance styles, prominent marsiya writers, and majalis-e-azaa and introduce the elegiacal works of Josh Malihabadi. In the second part of the event, Ahsan Khan will recite excerpts from Josh Malihabadi’s seminal marsiya, Hussain Aur Inquilab, in the traditional declamatory teht-ul-lafz style.

“I have always been fond of Hussain Aur Inquilab,” said Ahsan Khan. “Josh wrote nine Marsiyas but this one has always been my favourite. Very few people realize the important part it played in galvanizing the local populace to oust the British from united India but, once one listens to Josh’s electrifying poetry, its veritable value as a source of strength becomes obvious. I recently recorded a few short excerpts from the marsiya for a local television and have since been inundated to recite longer sections of the marsiya. I am glad to have a second opportunity to recite Josh’s captivating verse.”

“The power of Hussain Aur Inquilab to energize, motivate and inspire cannot be overstated,” believes Ally Adnan. “Eight years after its publication, the poem continues to retain its capacity to energize listeners, rouse emotions, and evoke revolutionary feelings, using the battle of Karbala as a source of inspiration, guidance and strength.

In the upcoming webinar, I will be presenting the origin, history and development of marsiya through the centuries, and take listeners through the journey which culminated with Josh Malihabadi establishing modern marsiya as a form as important as classical marsiya.”

Ally Adnan will be speaking in English to allow for greater reach to international audiences.

The writer is a graduate of IBA and a lover of art, culture and history. He is a freelance contributor and can be reached at nakbar@khi.iba.edu.pk