Taliban now have more Black Hawk helicopters than 85% of countries: US congressman

Taliban, at the zenith of power, have now seized the heavy-duty US military equipment, according to the reports. This utterly disappointing news fell on the American ears like a bomb shell because no one ever thought of it. Rather, it’s a nightmare for the US. The equipment’s include 200 helicopters, 75,000 vehicles, 600,000 small arms and light weapons, night-vision goggles, body amour, medical supplies, biometric devices, Humvees and attack aircraft. Moreover, the most dangerous weapon the Taliban have captured is a Russian-made D-30, an artillery gun, said US Republicans Jim Banks.

The earlier quarterly report from the US Special Inspector General for Afghanistan Reconstruction (SIGAR) in July this year said that the US has spent “nearly $88.61 billion to help the Afghan government provide security in Afghanistan” since the fiscal year 2002. The report said that the major portion of the Afghanistan Security Forces Fund (ASFF) that US created in 2005 “is used for Afghan Air Force (AAF) aircraft maintenance” and for paying the salaries of Afghan national defence personnel while the rest was “used for fuel, ammunition, vehicle, facility and equipment maintenance, and various communications and intelligence infrastructure”.

Where Taliban are likely to use this military equipment?

US experts agreed over the fact that the Taliban don’t have the basic know-how to use heavy weapons as it required professional training and management, but the fear still looms overheads because there are high chances of selling heavy weapons’ to other rival countries like China or Russia; or any other terrorist or extremist organization. This poses a great threat to the US and its allies, US congressman Michael McCaul told Reuters.

It is more likely, as experts believe, that the Taliban will use small weapons to snub the resistance ushered by Ahmad Massoud against their rule in Panjshir valley. Chances are also high that the Taliban might use these dangerous weapons’ against the armless civilians.

“We obviously don’t want to see our equipment in the hands of those who would act against our interests, or the interests of the Afghan people,” Pentagon spokesman John Kirby told reporters, adding that options are being looked at. “There are numerous policy choices that can be made, up to and including destruction.” 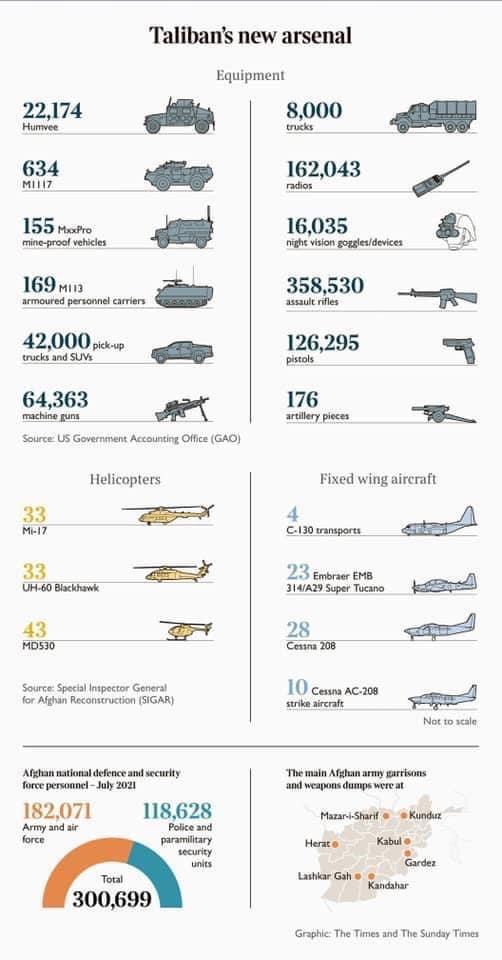 What America should do now?

The US should now be conscious about the circumstances more than ever, and discuss the present political kerfuffle with its neighbours. The US may ask them to interdict the transport of any of this equipment across the country’s borders, one expert told news agency AFP.

However, amid the chaotic situation, Such precipitative measures by the US leaves the Taliban in possession of more than $85 billion worth of military equipment, said Jim Banks.