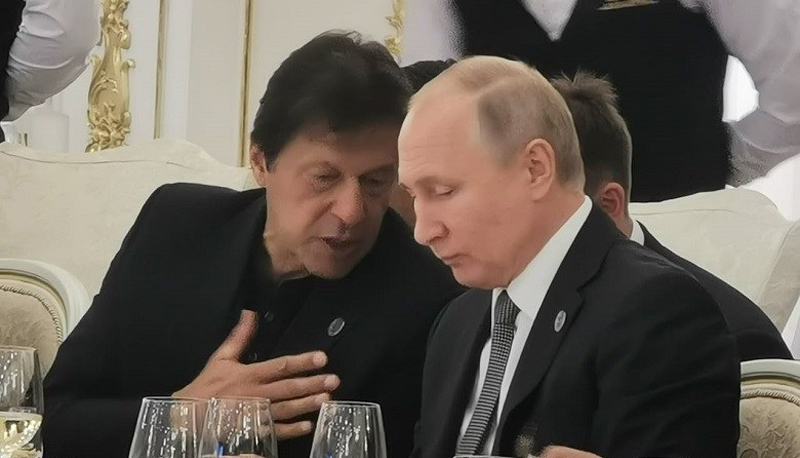 Russian President Vladimir Putin Wednesday spoke to Prime Minister Imran Khan over the phone to discuss at length the emerging political situation in Afghanistan and bilateral relations, as per the PMO.

PM Imran Khan said Putin that peace and stability in Afghanistan was much-needed for Pakistan and important for the region. He said that an inclusive political government was not only beneficial for the region but also coupled with the safety security of Afghans. The prime minister further emphasized that the international community must stay connected in Afghanistan to support its people, adding that the world needs to address its humanitarian crisis and ensure economic sustenance.

Prime Minister Khan said Pakistan attached high importance to the role of the Troika Plus format. He expressed satisfaction over the upward trajectory of Pakistan-Russia relations, with increased high-level exchanges and growing cooperation in diverse fields between the two countries.  The prime minister reiterated the government’s resolve to strengthen trade relations and bilateral collaboration in the energy sector, including the early realization of the Pakistan Stream Gas Pipeline Project. Both the leaders agreed to mutually cooperate within the SCO to promote regional peace and security.

The Russian president also spoke to his Chinese counterpart, President Xi Jinping, on the importance to prevent instability from causing disturbance to other parts of the region, as per a statement from the Kremlin.

In a phone call, the two leaders “expressed their readiness to step up efforts to combat threats of terrorism and drug trafficking coming from the territory of Afghanistan,” the Kremlin said.

According to international media reports, Putin and Xi “agreed to intensify bilateral contacts” and “make the most of the potential” of the Shanghai Cooperation Organisation (SCO) that is due to convene for a summit in Tajikistan next month.

Several ex-Soviet republics in Central Asia — where Moscow holds military bases — share a border with Afghanistan and China. While Moscow has been quite optimistic about the new leadership in Kabul, Putin has also cautioned the Afghan militia to not enter in neighboring countries as refugees.

The two leaders also talked about the present coronavirus situation, with Jinping saying that China is ready to work with Russia to deepen cooperation on vaccine development and production and ensure the safety and stability of the global supply chain for vaccines, to protect the lives and health of the two peoples and contribute to the building of a community of common health for mankind.

“Only the wearer knows whether the shoes fit or not,” Xi stressed, saying that it is the people of the two countries who have the most say about which system works in their own country. “As comprehensive strategic partners of coordination for a new era, China and Russia should deepen cooperation against interference and firmly hold their respective national future in their own hands,” Xi said.

He said China strongly stands with Russia in pursuing a development path that suits its national conditions, and firmly supports Russia’s measures to safeguard its national sovereignty and security.