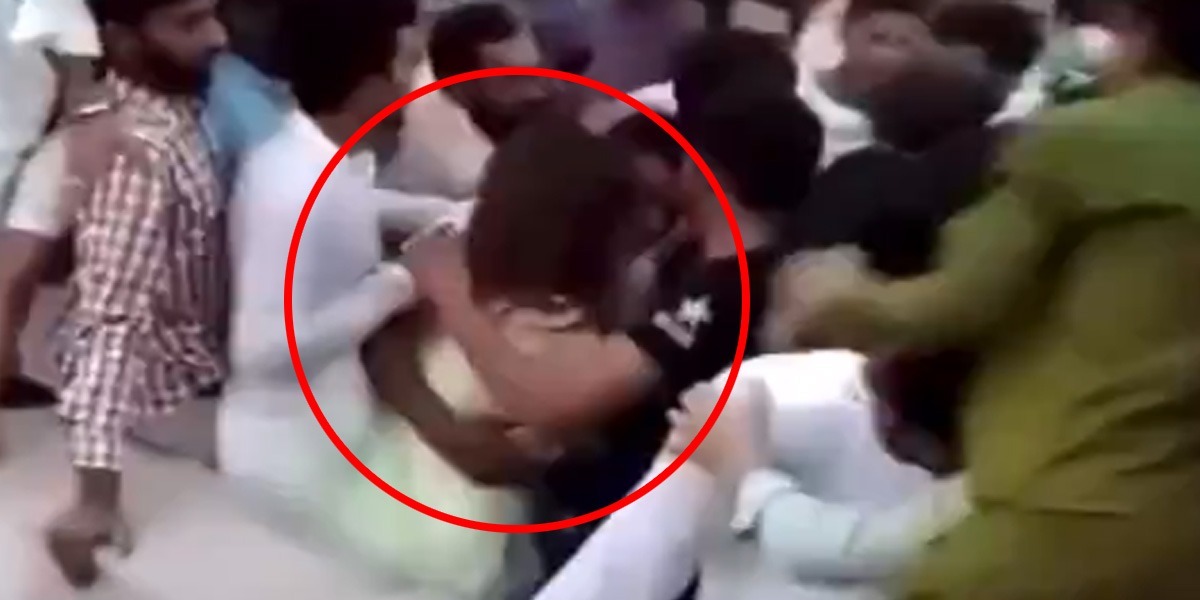 Video footage of an incident at Minar e Pakistan that has gone viral online and caused outrage across the country, clearly showing hundreds of men assaulting and robbing a woman who was making a tik tok video for Independence Day celebrations, is being investigated and culprits are being identified from the recording, according to the Punjab government.

A woman in Lahore’s Greater Iqbal Park was assaulted, grabbed and robbed by hundres of men in the daylight. According to the witnesses and police, the victim, along with her friends, was making a TikTok video in the park when hordes of men of all ages climbed a fence and attacked the woman. Police has lodged an FIR against 400 individuals as the video has gone viral as the government and authorities have been called out by international media and human right organizations and activists.

The victim has stated in her complaint lodged with the Lari Adda police station that she was filming a video near Minar-e-Pakistan on August 14 along with her friends, whom she visited the site with, when a mob of around 400 people attacked them.

The victim in her complaint further stated that when she and her friends tried to get away from the crowd, the guards at the Minar opened the gate of the fence, and they simply ignored the matter and went inside. While detailing the graphics of the assault through different videos surfacing on social media, the woman indicated that the mob picked her up and tossed her around for several hours. She further stated that when she and her friends saw the situation going out of hands they called 15 (the police emergency helpline) at 6:30 pm but no one came to help at till 9:00 pm. “I was stripped and my clothes were torn apart for straight 3 hours” she said, adding that she cried for help but no one came to her rescue. While her gold ornaments, cash and mobile phone were also snatched in the process.

The mob including men of almost all age groups jumped over the fence and ran towards us and started pulling me like animals, the woman said. She said that they clawed and tore her clothes and there is no body part of her left without bruises.

She said that some men tried to help her but the number of men was so overwhelmingly large that felt helpless. She said that the mob of men also assaulted her partner Amir Sohail’s friend and snatched his cellphone and Rs15,000. They even forcefully took off my gold ring and gold earrings, she said.

Videos of the incident surfaced later as many people present had cell phones and started recording the on going activity. People can be seen raising their mobile phones to take videos and pictures of her and start pushing her around. As the scores of men surround her, the woman starts screaming frantically.

DIG Investigation assures society to set an example through this case:

The police have launched a search for the accused after registering a FIR, First Information Report. DIG Investigations Shariq Jamal Khan said the police were taking the case as a challenge and promised to take it to the logical end. The police officer said the investigations were underway after the case was filed. “We have the videos and the experts are analyzing as it is a technical process to ascertain who was doing what.” Shariq Jamal said the case is very strong and that they have also recorded the statement of the victim.

The FIR was registered after the horrific footage of the woman being pushed, groped and thrown in the air went viral on social media. Pakistan Penal Code’s sections 354A, 382, 147 and 149 has been added in the FIR.

• PPC Section 382: Theft after preparation made for causing death, hurt or restraint in order to the committing of the theft
• PPC Section 147: Punishment for rioting
• PPC Section 149: Every member of unlawful assembly guilty of offence committed In prosecution of common object.

Punjab Chief Minister Usman Buzdar has taken notice of the incident and has sought a report from the CCPO Lahore. Azhar Mashwani, focal person to Punjab CM on digital media, said that the police are analysing the video clips and available CCTV footage to identify the culprits and arrest them. According to PTI leader Zulfi Bukhari, Prime Minister Imran Khan has taken notice of the assault and has spoken to Punjab IG. “These are gross violations of laws and social norms, the government won’t spare a single person involved,” he tweeted.

Bilawal Bhutto’s speaks about the rot in the society:

Meanwhile, PPP Chairperson Bilawal Bhutto has slammed the incident and asked the government to bring those responsible to the book. “The assault of a young woman by a mob at #minarepakistan should shame every Pakistani. It speaks to a rot in our society,” the PPP leader said. He said that those responsible must be brought to justice. “The women of Pakistan feel insecure and it is all our responsibility to ensure safety and equal rights to all,” he added.

Condemning the Minar-e-Pakistan incident where a woman was assaulted by a mob, Punjab government spokesman Fayyazul Hassan Chohan said that all the suspects involved in the incident will be brought to justice In a statement, Fayyazul Hassan Chohan said that the culprits are being identified through video footage. “The incident of assault on a woman in Greater Iqbal Park is a shameful act which has brought shame to the society,” he added.

Celebrities were left in shock and anger after the incident involving 400 men sexually harassing a woman at Lahore’s Minar-e-Pakistan unfolded. The victim clothes were torn off and she was tossed in the air by the mob. A trove of celebrities; took to Twitter to demand the higher ups to serve justice to the victim with some left completely speechless over the audacity of the perpetrators. The celebrities were with the view that they have lost complete faith in humanity. Many have dubbed the incident as the last straw, claiming this proves that if 400 men can be complicit in assaulting a woman in broad daylight than none can be trusted.