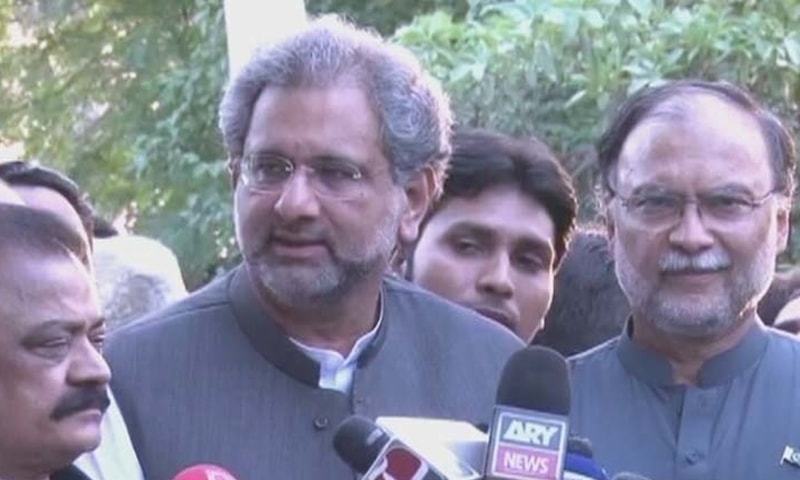 An accountability court has ruled that there no conflict existed  over non-transparency in the LNG terminal case filed against former prime minister Shahid Khaqan Abbasi by the National Accountability Bureau (NAB).

The court, in its detailed verdict on the bail granted to Abbasi, stated that the accountability watchdog’s case subject is not fully based if the former petroleum minister took financial benefit or otherwise.

“There was no conflict over whether or not there was transparency in the LNG terminal case. The authorised forum gave the approval for the LNG terminal,” the court ruled.

The order also stated that an American aid organisation agreed to give the  consultancy fees for the LNG project. Moreover, it also stated that NAB did not succeed to present any record to the court showing that Abbasi appointed the consultant.

“The consultant was appointed as a result of correspondence between Pakistan and the US. NAB has not shown how the former premier influenced another state in the appointment of the consultant,” the court ruled.

The court also stated that the only material presented by NAB against the former prime minister is the statement which was made by the former secretary petroleum as a pardoned witness.

“The court is not giving any observation on the standing of the pardoned witness’ statement and the pardon granted by Chairman NAB at this point,” the court added.

It added that whether the LNG terminal was developed in the interest of people or not needs further interrogation in this regard. “NAB has not been able to prove why there is a need to keep Shahid Khaqan Abbasi in jail,” said the court.

In 2019, NAB had arrested Khaqan Abbasi for alleged corruption while ordering a multi-billion rupee import contract for LNG in 2013 when he was the minister for petroleum and natural resources.

The public office holders were accused of misusing their authorities in active connivance with each other to give wrongful gains of Rs14.146 billion to EETL/ETPL/ECL in connection with LNG Terminal-1 of EETL and also caused a wrongful loss of Rs7.438 billion, approximately, for non-utilisation of unused capacity of second LNG Terminal of PGPL from March 2015 to September 2019.

It is pertinent to mention here that further losses to be incurred for the next 10 years will amount to Rs47 billion, approximately, as the said contract will expire on March 2029.

During the period, unexplained deposits of Rs1.426 billion were received in the accounts of Abdullah Abbasi and Rs1.294 billion were deposited in the bank accounts of Shahid Khaqan Abbasi during between 2013 and 2017, during which the above-said LNG terminal deal was struck.

According to the reference, by concealing the origin of the aforementioned deposits and layering, the accused also committed the offence of money laundering.