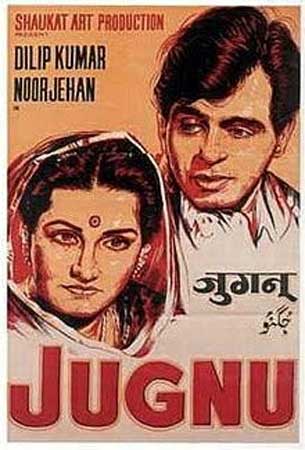 First span is when he was young hero in Black and White days. Second phase was when he was taken as a hero but by then he had converted from youthful looks to mature looks but his roles mostly remained romantic ones. Films were made in colour by then. Third phase was when he did some character roles. I constructed my earlier article on his personal struggle and movies up to 1956; Jugnu, Footpath, Andaz, Tarana, ‘Sangdil’ etc. Earlier he acted in Jwar Bhaata directed by Amiya Chakarvarti, Pratima, Milan directed by Nitin Bose, Ghar Ki Izzat, Shaheed directed by Ramesh Sehgal, Mela directed by SU Sunny, Anokha Pyar (1948), Nadiya Kei Paar directed by Kishore Sahu and Shabnam directed by B Mitra.

One can argue that Nurjehan’s movie ‘Mirza Saheban’ was victim of riots preceding creation of independent Pakistan but that argument did not hold for ‘Jugnu’ that clicked on box office. It had Nurjehan and Dilip Kumar as lead pair and Shaukat Hussain Rizvi as its director. After Pakistan was created, its prints had arrived here. On August 14, 1947 the release of director Mahbub’s movie ‘Elaan’ became victim of riots. Even ‘Jugnu’ could not be released in Pakistan. Since all the agreements made at the time of undivided India were null and void, Chaudhry Eid Muhammad released ‘Elaan’ in his Rattan Cinema. Since this release was illegal, India Film Bureau informed Mahbub in Bombay who came to Lahore and tried to stop its exhibition. It was due to the efforts of Agha G. A. Gul, Syed Atta Ullah Shah Hashmi, Mian Rafi Akhtar and Khurshid ul Hasan that Chaudhry Eid Muhammad agreed to stop exhibition of ‘Elaan’ in exchange of ‘Jugnu’, the latter did Silver Jubilee alone in this cinema. This film gave boost to Dilip Kumar as a romantic hero.

Movie ‘Anokha Pyar’ was Zia Sarhadi’s film. The two female stars with Dilip Kumar were Nalini Jewent and Nargis. The film starts with a stranger Ashok entering a village and encountering an innocent girl Bindiya who is selling flowers. Her songs while selling the flowers are very catchy as the music is given by Anil Biswas. Saving her from a village vagabond, the stranger Ashok gets hit on the eye. The flower girl takes to the doctor who treats him back to normalcy and while he opens his eyes he looks at doctor’s daughter Geeta, a role played by Nargis. Suddenly the world looks all beautiful to Ashok. This movie is considered as one of the best classical love story. Bindiya misunderstood Ashok’s service of Humanity and loved him. She never told him about her love for him. In fact she is innocent but love builds up in two hearts but is one-sided. In case of Geeta it is on both sides. Critics say that in those days all the films with Dilip Kumar and Nargis had tragic ending but this film had positive ending when the couple is united with an emotional ending.

The year 1949 had movies Shabnam (director B. Mitra), Jogan (director Kidar Nath Sharma). It portrayed the living standard; mixture of western way of living with Indian traditions. Music was given by Naushad Ali using Mukesh’s voice for Dilip Kumar and that of Muhammad Rafi for Raj Kapoor. Naushad choice of Lata for Nargis was won on merit by Naushad Ali. All votes were for Shamshad Begum as female voice but Naushad brought Raj Kapoor in the recording booth and took Lata in confidence. At the end of recording all clapped in appreciation and Lata was selected for Raj Kapoor’s next venture ‘Barsaat’. Regarding the storyline of ‘Andaz’ Neena is the spoiled daughter of a rich businessman (Murad). One day while horse riding she loses control of her horse and is rescued by a young man named Dilip (Dilip Kumar). The latter falls for her not knowing that she was engaged and was in love with Rajan (Raj Kapoor). In the end upon reading the letter left by Dilip in Rajan-Neena’s daughter’s doll, Rajan realizes he had been wrong about Neena’s infidelity and that Neena only loved him. The judge sentences Neena to life imprisonment and Rajan and his daughter come to see her before she is taken away.

Movie ‘Babul’ was Naushad Ali’s production; a tragic love story with Nargis opposite Dilip Kumar. Movie Arzoo was written by famous writer Ismat Chughtai and directed by her husband Shahid Latif. Music was given by Anil Biswas and main cast was Dilip Kumar, Kamini Kaushal, Neelam, Shashikala. The storyline was that Dilip Kumar and Kamini love each other madly. But Kamini’s father marries her to a rich man. Dilip Kumar thinks wrongly that Kamini had cheated on him and wants to take revenge from her. So he takes up a job in Kamini’s sister in law’s house as music instructor. Main plus point of this movie are its songs composed by Anil Biswas. It established Dilip Kumar and Talat Mahmud team as made for each other.

1951 was another busy year for Dilip Kumar as he gave the cinema lovers three hit films Hulchul, Tarana and Deedar. We have talked about Tarana, another Dilip Kumar’s hit film of 1951. The other two Dilip’s films of 1951 are Hulchul directed by S. K. Ohja and Deedar directed by Nitin Bose.

Let me give you the storyline of this film first as it was totally a different film from the prevalent romantic films being made in early 1950s. As per film’s outline given on Wikipedia, on the day of his wedding, the life of a jailer is saved by an inmate during a prison break. Back in his cell the prisoner, Kishore, recounts his life story. He spent his childhood amidst the family of a wealthy landowner and was treated like a son. But when the landlord died his jealous son relegated Kishore to the status of a servant. Kishore’s romance with Asha, the young landlord’s sister, earns him a beating. Instead of damaging the family’s honour by eloping, he agrees to leave on condition that he may return when he has become worthy of Asha’s hand. He finds a job as a carnival daredevil, diving in flames from a high platform into a tank of fire. However, the carnival’s lady owner wants thrills of a different kind. When Kishore makes it clear that his heart had been given elsewhere, Madam is not amused. She arranges for Kishore to be murdered but the plan goes awry and Kishore ends up being wrongly convicted of her murder and thus finds himself in jail. Both the jailer and his fellow inmates sympathize with him. Dilip’s role as Kishore was appreciated along with Muhammad Safi and Sajjad Hussain’s music. Dilip excelled in natural acting and was a trend setter.

As per ‘The Hindu’ website, May 27, 2010, the movie ‘Deedar’ was also a trendsetter in India for multi-starrer films. Many multi-starrer films were made subsequently like B, R. Chopra’s Waqt and Yash Chopra’s ‘Kabhi Kabhi’ but the trend setter credit must be given to Nitin Bose with Dilip Kumar, Ashok Kumar, Nargis, Nimmi, Yakub sharing the screen limelight in Deedar. Bimal Roy and Naushad played their role in the success of this film. Deli Kumar’s effortless enactment of a doomed lover and pristine singing by Mohammed Rafi remained unmatched. In fact, Muhammad Rafi’s tear drenched voice enhanced Dilip’s lovelorn persona and music is the bedrock of the everlasting appeal of “Deedar”.

1952 gave Dilip Kumar three memorable films namely Dagh with Nimmi, Sangdil with Madhubala and Aan with Nadira; the latter being an action movie. Filmfare Award for Best Actor was received by Dilip Kumar for the movie ‘Dagh’ for his role as a drunkard and acting on Talat Mahmud’s song ‘Aei Mere Dil Kahin Aur Chal. His addiction to alcohol by buying alcohol instead of medicines for his mother and the regret thereafter was a role outstandingly performed. Movie Sangdil was one of the best romantic films directed by R. C. Talwar. The film is an adaptation of the 1847 Charlotte Brontë classic novel Jane Eyre. Movie ‘Aan’ was famous for being Mahbub Khan’s technicolour action films.

1953 was not very successful commercially despite the movies ‘Shikast’ and ‘Footpath’. This drama film was produced and directed by Ramesh Saigal. The film stars Dilip Kumar, Nalini Jaywant, Durga Khote, Om Prakash and K. N. Singh. The film’s music is by Shankar Jaikishan. Wajahat Mirza wrote the story and dialogues for this film. The movie is loosely based on the Bengali movie Palli Samaj. The title of the film means defeat. The storyline is that after a seven year absence, Dr. Ram Singh returned to his village intending to sell his land and go back to the city. Observes that the peasants are being mistreated by the local landlord and the landlord’s sister, Sushma with the latter he was in love with once. Unwilling to see the peasants suffer further; Ram decides not to sell and opens a school and a hospital instead. When the plague breaks out, the doctor saves Sushma’s son and the flames of love are rekindled. However, social norms become a barrier to in expressing her feelings in any other way. Instead, Sushma resorts to further acts of cruelty in order to prevent Ram from leaving. Meanwhile, her brother stirs up hostility against the pair by spreading malicious rumours which excite the superstitious villagers, leading to a trial and a watery climax. My interest in this film was music by Shankar Jaikishen, especially the Lata-Talat duet ‘Jab Jab Phool Khile’.

1954 was devoted to a big film ‘Amar’ by Dilip Kumar as criminal lawyer. It was a very well- directed film. While Dilip is in love with Madhubala (playing role of a scholarly activist), both of equal status, Dilip is tempted one stormy night and he consumes the milkmaid Nimmi who too yearns for Dilip Kumar and hovers around him, who enters Dilip’s house escaping from Jayant’s sexual assault. Sonia’s blooming youth and fragility ignite lust in Amar and he inflicts himself upon her. Though raped by her idol, Sonia seals her mouth about the crime until an accident reveals her carrying a child. Despite remonstrations by many to reveal the name of the offender, Sonia remains silent and is protected by Anjoo from the rabble rousers. The film didn’t do well commercially as viewers were accustomed to happy endings and Dilip’s negativity in his character, a role meticulously played by Dilip Kumar. In the motion picture industry, a box-office bomb or box-office flop is a film that is considered highly unsuccessful or unprofitable during its theatrical run. Although any film for which the production and marketing costs exceed the combined revenue after release can be considered to have “bombed”, the term is more frequently used on major studio releases that are highly anticipated and expensive to produce.

Roy’s film Devdas is considered to be the best film among the films made on Novel by Sharat Chandra Chattopadhyay, the movie is the story of childhood sweethearts, Devdas and Paro set against the backdrop of rural Bengal during feudal times. When they decide to marry, Devdas’ father disapproves the relationship as they belong to a very rich family and sends him away from the village for college studies to Calcutta. Parvati’s marriage is fixed with a wealthy zamindar, a widower with children older than his young second wife. In Calcutta, Devdas drowns his sorrows in alcohol and wishes to meet Paro one last time before he dies. He meets Chunilal who introduces him to an attractive and strong willed courtesan, Chandramukhi (Vyjantimala). Chandramukhi decides to nurse Devdas.

The article has been written and contributed by Dr Amjad Parvez who is the recipient of the prestigious Pride of Performance award. He can be reached at doc_amjad@hotmail.com