Pakistan-Bangladesh business forum in the offing 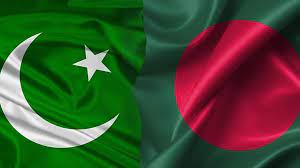 Pakistan Bangladesh Business Council may be created to give a quantum jump to bilateral trade and to ensure durable peace in this region, said Mr. Imran Ahmad Siddiqui Pakistani High Commissioner in Bangladesh.

The High Commissioner pointed out that Pakistan and Bangladesh share many commonalities while Pakistani professionals have played a major role in the development of Bangladeshi textile and garment industry on solid and sustained basis. He said that we must reactivate the dormant organizations like the joint economic commission. He said that the business community can accomplish this task with his entrepreneur’s skills and hence it must play its role in the best interest of the country and nation. He also stressed the need to bring private sectors of both countries closer to materialize the dream of enhanced cooperation. He said that Bangladesh economy has attained a position to invest in other countries and Pakistan should be their first choice for this purpose.

Engineer Ihtesham Javaid, President Faisalabad Chamber of Commerce & Industry said that Faisalabad is Pakistan’s 3rd largest city which alone is contributing 25% share in Pakistani economy. “It has the biggest industrial state in addition to developing a state-of-the-art special economic zone under CPEC (China Pakistan Economic Corridor)”, he said and added that we have seen that Bangladesh has made remarkable achievements by enhancing its textile and garment industry. He said that both countries have the potential that needs to be explored as it offers new opportunities for businesses. “I suggest that Bangladeshi investors should come to Pakistan and invest by establishing industries”, he said and added that new routes are now available for Bangladesh to reach Pakistan through China.

He said that these routes must be utilized for increasing bilateral trade. He further said that in 2020, the volume of bilateral trade was $644 million, which was very little considering the size of market and opportunities. He said that the good news is that the volume of trade has increased significantly in 2021, as a rise in trade between Pakistan and Bangladesh has been reported. He said that Pakistan offers opportunities for cutting down the cost of many products through the facilities it could offer to the Bangladeshi investors and industrialists. He said that the current GDP growth rate of Pakistan is 3.9%, and it could offer job opportunities to 2.4 million people. Bangladesh and Pakistan, both are developing countries, faced with similar kinds of conditions, thus, both countries should take measures and collaborate in enhancing their bilateral trade ties on a solid and sustained basis.