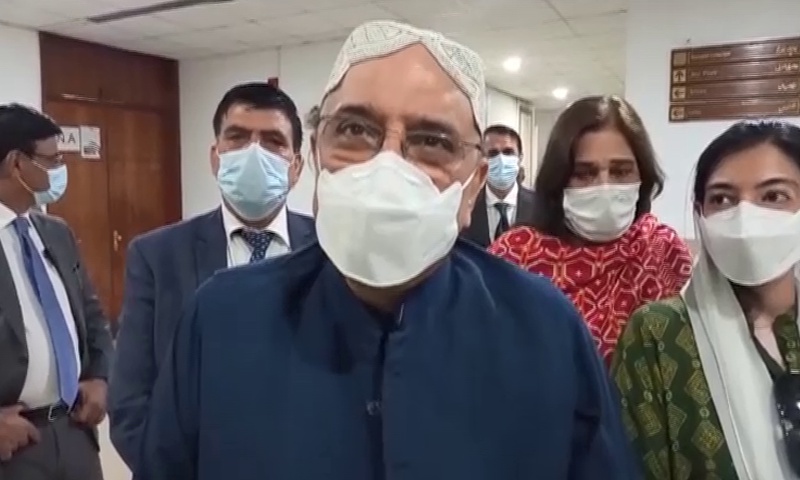 PPP co-chairperson Asif Ali Zardari termed the situation in Afghanistan “dangerous” on Tuesday, saying that Pakistan could face backlash for it.

Speaking to media prior to the budget session in parliament, he stressed the need for Pakistan to be on the lookout due to the situation in Afghanistan and mull and deliberate on the matter.

He expressed hope that relevant officials and authorities would be monitoring the situation in the neighbouring country and take decisions accordingly.

In recent days, concerns have been raised over a security vacuum in Afghanistan amid the US pullout as prospects of a successful reconciliation between the Afghan government and the Taliban are fading out with each day.

Pakistani authorities fear a further intensification of the civil war in Afghanistan following the completion of the pullout in the absence of a political settlement.

These fears are further fueled by rising violence in the war-torn country in the wake of the US drawdown.

Since early May, the Taliban have launched major offensives targeting government forces across the rugged countryside.

Former president and Pakistan People’s Party Co-Chairman Asif Ali Zardari has said that the government should take parliament into confidence on its contacts with Israel.

Talking to media outside the National Assembly building on Tuesday, Mr Zardari called upon the government to take the parliament into confidence regarding any attempt to establish contacts with Israel.

On Afghanistan, the former president warned that the situation was precarious and hazardous and it could impact Pakistan. He was of the view that it was necessary to keep an eye on the Afghanistan issue and ‘doing some thinking on the Afghan situation is the need of the hour.’

He asked the government to take the parliament aboard on every matter.

When a journalist asked him what did he reckon, would the government stay in power or fall? He retorted how come the government would fall when there was already no government.

Earlier, Asif Zardari left the accountability court within minutes as the court allowed him to leave during the hearing of fake accounts reference against him.

Two weeks ago, the accountability court summoned former president Zardari on June 29 in an alleged illegal transaction of Rs8 billion in a fake bank accounts case.

The judge said Zardari would be provided with a copy of the reference on arrival following which date would be fixed for his indictment in the case.