Court summons Zardari, 17 others on Aug 19 in Park Lane reference 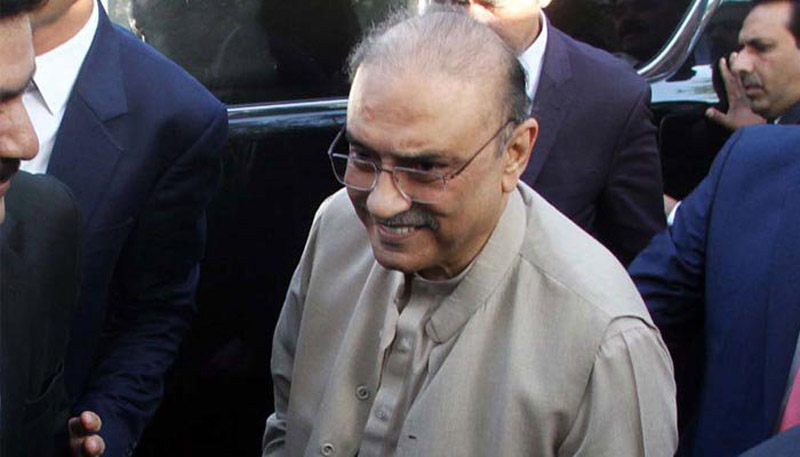 An accountability court issued notices to former president Asif Ali Zardari and 17 others to appear before the anti-graft watchdog court on August 19 in the Park Lane Reference Case.

Seventeen other accused have been named in the reference along with Asif Ali Zardari.

During the executive board meeting of the bureau, the NAB chief had consented to file the reference against the PPP co-chairman, who allegedly incurred a loss of Rs 3.77 billion to the national exchequer.

According to details, Zardari was accused of running a fake front company by the name of Parathon as a shareholder in the Park Lane properties.

A loan worth Rs 1.5 billion was taken out from the bank and transferred to the company account in a private bank. It has also been revealed that he had forged documents to comply with the loan policy and coaxed the National Bank into loan approval.

It may be noted that the PPP leader is already in the custody of the NAB in the Park Lane case.

The anti-graft watchdog has called the siblings on July 31 for questioning on allegations against them pertaining to corrupt and fraudulent practices.

All those summoned for questioning are reportedly shareholders in the Chaudhry Sugar Mills and are accused of laundering money and possessing assets beyond known sources of their income.

Earlier, the Lahore High Court (LHC) was informed on Tuesday that PML-N leader Rana Mashood’s name was placed on a blacklist on a request by the NAB to prevent him from fleeing abroad.

The Interior Ministry submitted its reply in the LHC on a petition pertaining to the PML-N leader being blacklisted over his alleged involvement in a corruption case.

It stated Mashood was blacklisted on the corruption watchdog’s request on June 21 this year as it apprehended he might flee abroad.

Earlier, on June 29, the Federal Investigation Agency (FIA) had barred the former Punjab Education and Sports minister from flying abroad at Lahore airport.

Rana Mashood was offloaded from a private airline’s aircraft by immigration officers of FIA at 2 am because of his name being on the blacklist over his involvement in the alleged embezzlement of funds of the Punjab Youth Festival. He was to fly to the United States.

The NAB has launched a probe into alleged misappropriation of millions of rupees of the Punjab Youth Festival in 2011 and 2012.

The NAB chairman and federal law secretary have been made party in the petition. Ismail got a protective bail from the Sindh High Court (SHC) last Friday.

In the petition, he called the charges against him baseless and sought a pre-arrest bail from the high court till completion of the investigation and filing of a reference against him in court.

The NAB teams last Thursday conducted raids at his residences in Karachi and Islamabad for his arrest.

Former prime minister Shahid Khaqan Abbasi has also been arrested by the accountability bureau in the same case.

In June 2018, the NAB had approved inquiry against Abbasi, who was ex-minister for petroleum and natural resources at that time, in granting contract of LNG terminal for 15 years to their ‘favourite’ company.

It was also observed that this contract had allegedly caused a loss of billions of rupees to the national exchequer. The NAB in January interrogated former finance minister Miftah Ismail in the same case.

According to NAB papers, the contract for the LNG import and distribution was awarded to the Elengy Terminal, a subsidiary of Engro, in 2013 in violation of the Public Procurement Regulatory Authority (PPRA) rules and relevant laws.

The apex court on September 10, 2018 had directed the NAB to complete the inquiry against Abbasi and others for the alleged corruption in the LNG contract.