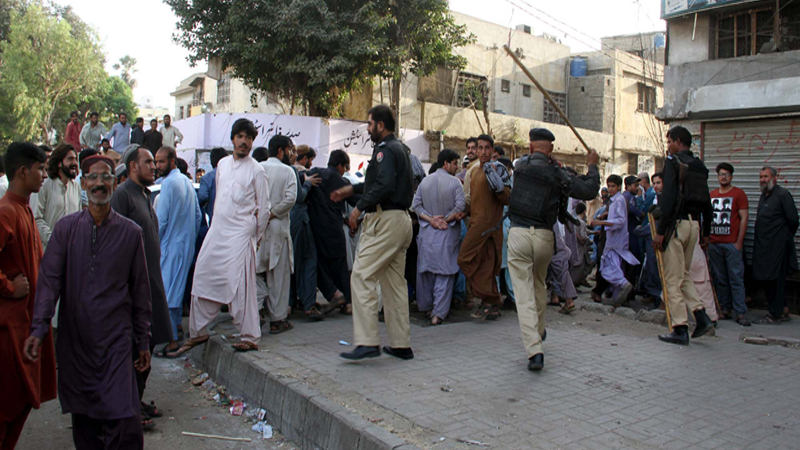 SIALKOT: The grieved family, heirs, and a large number of the villagers staged an anti-police agitational demonstration against the brutal killing of a youth, brutally tortured to death physically here late at the last night (the night between Wednesday and Thursday).

The protesting people kept the dead body of the victim Suhail Ahmed (34), on the main road near Sialkot Saddar police station. The protesters burnt the tyres on the road, and they chanted anti-police slogans. They were carrying agitational banners and placards demanding the arrest of the accused police officials besides registering a murder case against them.

On this occasion, the grieved family of the victim Suhail Ahmed told that the Sialkot Saddar police had stormed into the house of the victim Suhail in village Dhutal-Uggoki eight days ago and police led by Inspector Mian Qadeer Ahmed (SHO Sialkot Saddar police station) and police kidnapped youth Auhail, his mother, his wife, sister and brother-in-law in a theft case.

They alleged that the Sialkot Saddar police had some private torture cells run by police in village Nawan Pind.

They demanded immediate shut down of these private torture cells being run by the Sialkot police.

The family added that all the male and female members, kidnapped by police, were brutally tortured there.

They said that the victim, Suhail, was also kept separate in a private torture cell where ASI Shehbaz Ahmed tortured him brutally for eight consecutive days, due to which he died.

After his sad demise by police torture, the police released all the kidnapped and tortured family members of the victim from a so-called theft case.

The family revealed that they brought all the situation to the notice of Sialkot District Police Officer (DPO) Abdul Ghafat Qaisarani by the other family and told him about the brutal torture on the victim at a private torture cell by police.

The grieved family has strongly protested against this Sialkot police highhandedness.

They have urged the Punjab Chief Minister Sardar Usman Buzdar to provide justice to them besides registering a murder case against all the accused police officials in this regard.
Meanwhile, Sialkot DPO Abdul Ghafar Qaisarani told the newsmen that justice would be done. He said that a high-level inquiry had been ordered against the accused police officials, and they would be brought to task if they found guilty.

A large number of people from all walks of life attended his funeral.