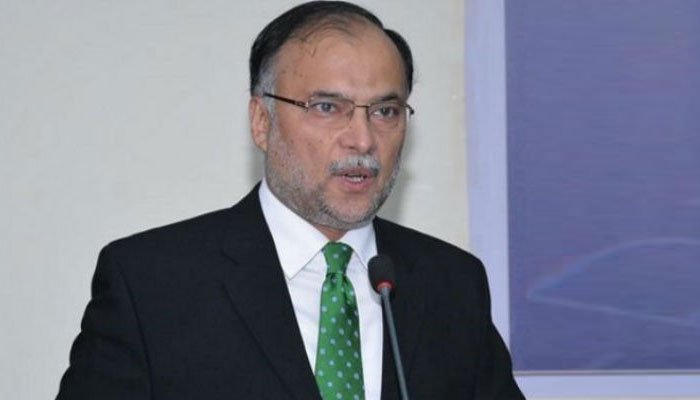 PML-N leader Ahsan Iqbal says that Fawad Chaudhry tried to intimidate the Election Commission and that the government wants to make the Commission an institution like NAB. He added that they destroyed the national institutions one by one.

Talking to the media outside the accountability court, PML-N leader Iqbal said that four secretaries were replaced in a year, adding that there was a danger that the government might pledge Pakistan’s nuclear program.

He said that the budget presented did not solve the problem of inflation and unemployment and that PTI members are, themselves, saying that this government has committed corruption.

Ahsan Iqbal said that the proceedings of the accountability court should be aired on TV.

“Today, again, I have appeared in the false case of Narowal Sports City. The Pakistani nation has seen that even after 3 years, there is no concrete case. The people are sitting in the government and the national planners are going round the courts.”

He said that he condemned the statements of the Federal Minister of Information, Fawad Chaudhry who tried to intimidate the Election Commission and added that it should be an independent and sovereign body.

“PTI is introducing electronic machine machines (EVMs) for fear of losing the next elections and the government wants to dismantle the Election Commission. It wants to make arbitrary amendments.”

Ahsan Iqbal said that the ship coming to the coastal town of Gadani is also a story of corruption as the ship was stopped by Bangladesh and India due to carrying poisonous substances but was allowed to reach Gadani by the government.

The League leader said that Pakistani businessmen are taking their businesses abroad and in such a situation, who would invest in the country?

Ahsan Iqbal said that Pakistan is not a primary school on which experiments are being conducted.