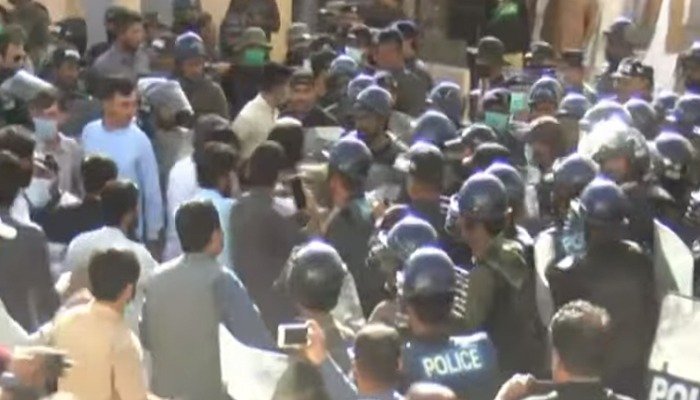 After the chaos that erupted outside the Balochistan Assembly on Friday, opposition members decided to surrender before the police and facilitate arrests.

The decision was taken in a meeting of the opposition parties chaired by the Leader of the Opposition Malik Sikandar in the provincial assembly. It took place in Quetta on Sunday.

Police had booked 17 members of the Balochistan Assembly all of whom belonged to the opposition.

According to sources, police were unable to name the chief minister and police officers in the first information report (FIR) on the applications of the Opposition members. The FIR includes clauses of meddling in the state matters, violating coronavirus standard operating procedures (SOPs) and attacking police personnel.

Sikander said that all members who have been named in the FIR will go to Bijli Road Police Stations so that they could be arrested. MPA Abdul Waheed Siddiqui will go to Karachi for treatment, he added.

Chaotic scenes erupted outside the Balochistan Assembly on Friday as scores of protestors and Opposition lawmakers holding a protest outside the assembly were baton charged by the police.

Opposition lawmakers locked all four doors of the Balochistan Assembly to prevent the budget session from taking place today, reported the police.

Clashes erupted when police arrived at the assembly gate at the MPA Hostel when Opposition lawmakers and police exchanged heated words.

Police, at the moment, are trying to open the doors of the assembly so that lawmakers can enter and the budget session can commence.

Shahwani said if the Opposition was serious, it would have properly gone through the budget and recommended its suggestions.

He rejected reports that the Balochistan chief minister had been hit by a flower pot, adding that the Opposition supporters’ act of hurling objects was “shameful”.