US must find a political solution before leaving Afghanistan, says Imran Khan 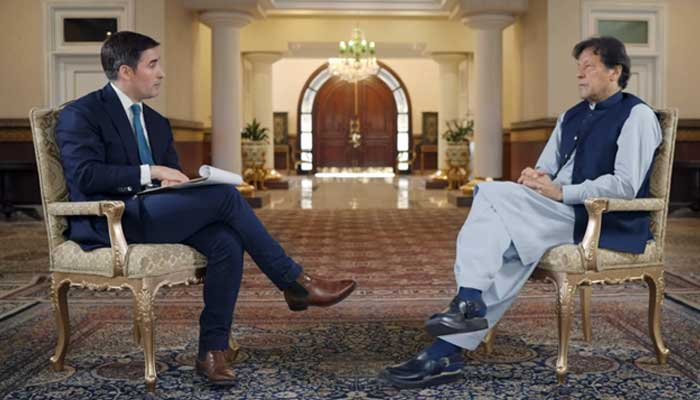 ISLAMABAD: Prime Minister Imran Khan has said that the United States must establish a political ground before withdrawing from Afghanistan and added that Pakistan has suffered a lot due to the instability in the region.

“Before leaving Afghanistan, the US must find a political solution,” he said. “We only want peace and don’t want to be a part of any confrontation.”

Pakistan’s prime minister attributes some of his country’s relative success in mitigating coronavirus spread to opting not to impose a total lockdown, instead just in hot spots:

“75% of our workers are in the informal economy. … You cannot lock down hungry people.” #AxiosOnHBO pic.twitter.com/W2x87R8lV6

In an interview with HBO Axios, the premier said Pakistan will “absolutely not” give bases to the CIA for anti-terror action in the war-torn country.

“Over 70,000 Pakistanis embraced martyrdom due to the US-Afghan war. We have given sacrifices more than anybody else in this war.” He noted that his country is currently hosting three million Afghan refugees.

Imran Khan has warned the world of the possibility of a civil war in Afghanistan if foreign troops leave the war-torn country without settlement.

Responding to a question, the prime minister stated that the country’s nuclear programme is only for self-defence.

“I am against nuclear weapons, but our nuclear arsenal is for defence purposes,” he said.

Increasing Islamophobia in the West

PM Imran Khan highlighted that Islamophobia has increased in Europe after 9/11 and urged international efforts to counter this dangerous trend. He termed a “big communication gap” between the Islamic world and the western societies as the main reason for this increase.

He said after 9/11, the term ‘Islamic terrorism’ was coined massively that misguided people in the West who started believing that Islam led to terrorism.

He pointed that with the involvement of a few Muslims in terrorist activities, the entire 1.3 billion Muslim community became the target.

Lashing out at the West’s indifference towards the plight of the Kashmiris, the premier said India has turned Kashmir into an open prison by deploying hundreds of troops there.

The West is ignoring the atrocities in Kashmir with hundreds and thousands of Kashmiris been killed by the Indian troops, he added.

The prime minister said the Kashmir issue was “much more relevant” where 800,000 Indian troops had literally put the nine million Kashmiris under jail.

“Why is this not an issue? I think this is hypocrisy,” he said.

Asked about “doing vastly better than the United States” on COVID-19, the prime minister said partial lockdown coupled with comprehensive data analysis helped his government keep the pandemic in control.

Smart lockdown was the “best decision” to cope with the situation, he added.

Imran Khan recalled that with people in Spain and Italy ending up in hospitals as COVID-19 raged through Europe, there was a big temptation by the politicians from Opposition for a total lockdown. However, he said, he opted for a smart lockdown keeping in mind the problems of the poor.

He mentioned that an effective working of the Command and Control Centre with daily data monitoring and input by provinces, army, doctors and health specialists helped the government handle the situation.

‘China is a friend’

When asked to comment on the Uighyr issue, he said Pakistan and China discuss issues behind closed doors.