* During SiriusXM's Jeff Lewis Live on Wednesday, host Jeff Lewis asked, 'I feel like you would have told me if there were problems at home, right?' 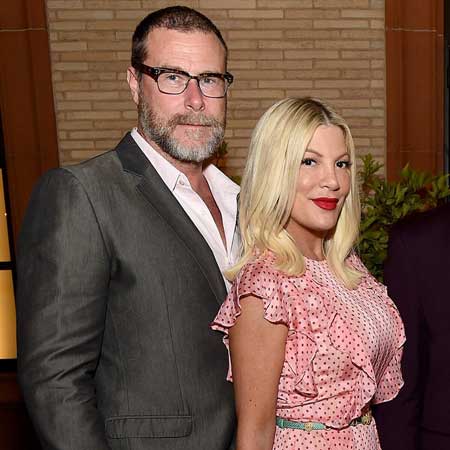 Tori Spelling confirmed there’s trouble in paradise. The Beverly Hills, 90210 alum explained she and her husband of 15 years, Dean McDermott, are no longer sharing a bed amid rumours that they’re having marital problems.

During SiriusXM’s Jeff Lewis Live on Wednesday, June 16, host Jeff Lewis asked, “I feel like you would have told me if there were problems at home, right?”

Tori, 48, replied, “No. ‘Cause then you spill my s–t right here. Of course I’m not going to tell you what’s really going on.”

Jeff probed, “What is really going on? You put the wedding ring on. Are things okay? Because I feel like the last time you were here things were good; you were having sex. Are you guys sleeping in the same bed?”

She responded, “You know what? Right now, my kids and dogs sleep in my bed.” When Jeff speculated that Dean, 54, is “in the guestroom,” she clarified, “He’s in a room.”

Later in the convo, Jeff said he’d “like to see stay together,” adding, “You can always tell us here. This is a safe place.”

The Spelling It Like It Is author shared, “Since he left-this is not good you guys-but since he left, he was gone for six months filming in another country. All stayed with me. So, I currently still have four in the bedroom with me, who have yet to go back to their rooms.”

Tori, 48, replied, ‘No. Because then you spill right here. Of course I’m not going to tell you what’s really going on’

Though it’s unclear where Dean has been for work, the Canadian-born actor recently starred in the TV crime show Pretty Hard Cases and is next working on the film A Perfect Chaos.

Tori said their four youngest children all sleep in her room, some with beds set up in her space and two that sleep in the bed with her. “And pets. Three dogs,” she noted.

The Bleeding Greed actress implied that any issues in her love life might not be so new, saying the situation is “maybe not” any different from the last time he asked. Jeff claimed she recently told him they were still having sex, but Tori teased that he was a “liar.”

“Wow! When you get really excited, I can tell how great your eyes look like,” Tori laughed, cryptically adding, “I haven’t seen his eyes shine like this in years. When he’s trying to like call me.”

However, she kept it coy and didn’t reveal anything more about their relationship status.

Back in May, the couple marked 15 years of marriage, but didn’t celebrate the milestone on social media.