‘You have a bomb onboard’: Belarus told Ryanair pilot 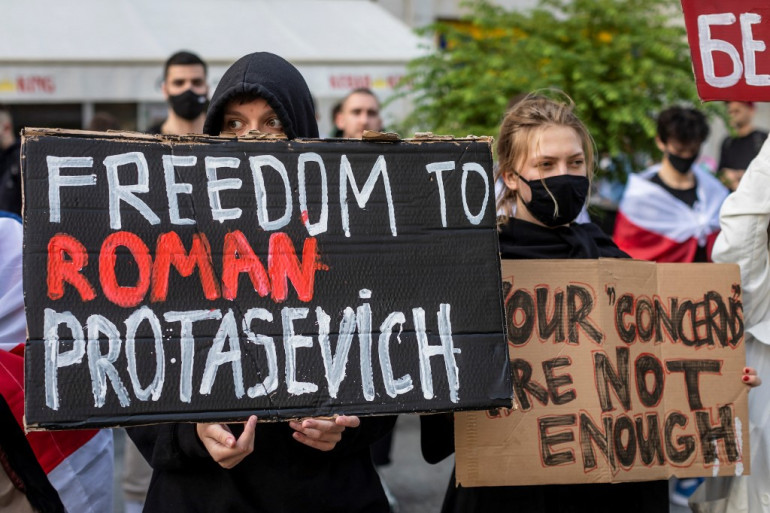 Belarus air traffic control told a Vilnius-bound Ryanair flight that a bomb was on board and suggested it divert to Minsk, according to a transcript released by the transport ministry Tuesday.

The aviation department of the Belarus transport ministry released a transcript of what it says was the conversation between Minsk airport and the Ryanair pilot:

“We have information from special services that you have a bomb on board and it can be activated over Vilnius,” Minsk air traffic control said, recommending that the aircraft make a landing.

The pilot then questioned the origin of the bomb threat, to which Minsk said that airport security had received it via email.

Belarus several times suggested that the plane land in Minsk saying it was “our recommendation”.

On Monday however Belarus authorities said that the decision to land in Minsk was made independently by the pilot, and that he had the option of going to either Poland or Ukraine.

They also said the bomb threat supposedly came from the Palestinian Islamist group Hamas, in an email addressed to Minsk airport. They reiterated this claim in Tuesday’s statement.

The transport ministry also said on Tuesday that representatives of international agencies were invited for “further consideration of the circumstances” of the incident.

The Ryanair aircraft travelling from Athens to Vilnius had an opposition activist on board who was arrested in Minsk airport after all passengers disembarked for a security check.

Roman Protasevich, 26, fled Belarus in 2019 to the EU from where he co-ran the Nexta Telegram channels, a key Belarus opposition media that helped mobilise protesters.

Belarusian state TV late on Monday broadcast a short video of Protasevich confirming that he was in prison in Minsk and “confessing” to charges of organising mass unrest.

His allies however say the video was made under pressure from authorities.