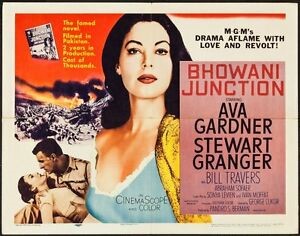 Ladies and Gentlemen, you are in Lahore and it is April 1955. The city is blown away by an extraordinary event and for a few vibrant weeks, residents of this historical city will converge on the railway station to catch a glimpse of one of Hollywood’s most glamorous pair – Ava Gardner and Stewart Granger. Hollywood has dropped in for a brief but memorable visit and a part of the Lahore Railway Station will itself take up an unusual appearance with lights, reflective mirrors, filming equipment and the dazzling atmosphere that one usually associates with movie sets, for this after all, is the location shooting of one of MGM’s most ambitious productions of that era, Bhowani Junction.

But first, a little background about the author and his book, inspiring this amazing film.

Born in Calcutta in 1914, it is difficult to assess whether Lt. Col. John Masters, DSO, OBE was a better soldier or a historical novelist who, by virtue of serving as a British Army officer in India and Burma during WWII, got inspired to document the prevalent military culture in the days of the British rule.  Masters’ prolific writing, which covered both fiction and non-fiction, continued right up to his death in 1983.  However, what brought fame to Masters was his 1954 masterpiece Bhowani Junction. Bhowani was an imaginary location in India, set against the turbulence and chaos around the struggle between non-violent movement of Congress and violent Communists, all part of India’s march towards the 1947 partition.

Many of the novels penned by John Masters dealt with life in British India. His own background could qualify him as a “Gora Indian”. His family had a long association with India going back to 1805 when his great-great grandfather came to India with the King’s 8th Light Dragoons. His great grandfather was headmaster of La Martiniere School in Calcutta (still a prominent educational institution) and his grandfather served with the Indian police. His father served with 16th Rajputs while three uncles served with 34th Sikh Pioneers, 104th and 119th Hyderabad Infantry. John joined the 1933 batch of Sandhurst and commissioned in August 1934. He then joined the 2nd Battalion of 4th Gurkha Rifles, but left the army and became a celebrated author writing historical novels about India. His observations on Indian life are amazing and the famous Indian author Khushwant Singh is known to have said that “Kipling knew India, but Masters knew the Indians.”

Bhowani Junction turned out to be a best-seller and was set in 1946 around the life of an Anglo-Indian girl, Victoria Jones, in a rapidly changing world. The story covers her three affairs with an Indian, Anglo-Indian and a British. In 1955, MGM Studios decided to make an epic movie of this novel. Directed by George Cukor, the beautiful and vivacious Ava Gardner was chosen for the role of Victoria Jones, a recently released nurse of the British Army, together with the British born Hollywood star Stewart Granger in the role of the dashing Colonel Rodney Savage, British Commanding Officer of the Gurkha Frontier Force Battalion assigned to stop demonstrators from preventing the trains from departing the local station on time. MGM wanted to film at a selected location in India. The film revolves around the fictional city of Bhowani which was most likely Jhansi. However, the Indian government had some reservations with the novel’s theme and many Indians in fact considered it downright unacceptable. The Indian government insisted on reviewing and approving the script. Indian tax collectors also wanted more than a fair share of excise tax plus 12% of the net world profit. MGM decided to change gears and approach Pakistan instead and the Pakistan government grabbed the opportunity, offering all possible assistance as well as waiving of all taxes.

So, back to April 1955, when the film crew from Hollywood and London landed in Lahore. Many scenes were filmed at Lahore railway station, Shalimar Gardens and Shah Alami market. The film crew stayed at Falleti’s Hotel and room 55; the two room suite where Ava stayed, was later named Ava Gardner Suite. There were many interesting incidents during the crews stay in Lahore. One day, Ava ran out of bathroom stark naked shrieking with fear and chased by a large bat. Someone handed her a large bath towel while others chased the bat with tennis racket. Not sure how the story ended.

Bhowani Junction can be best described as a marriage of fact and fiction (you are free to call it faction). The story is told in flashback as Colonel Savage (Stewart Granger) is leaving Bhowani Junction by train to go on another military assignment, kisses Victoria goodbye and retreats to his train cabin where he tells another British officer, who is new to the country, about his experiences in India. Victoria, the daughter of an Anglo-Indian engine driver, is involved with Patrick Taylor, also an Anglo-Indian, and the train superintendent at the Junction. However, her feelings grow ambiguous, as she experiences the British Army culture and on her return to Bhowani after her release from service, she views her community and her relationship with Patrick in a different perspective. In a grim turn of events, our heroine unintentionally ends up killing a British officer from Savage’s unit, defending herself from being raped. She is helped in concealing this matter by Ranjit, a nationalist Sikh, who aims to induct her into the Sikh faith so that he could marry her.

The 5th Battalion of 13th Frontier Force Rifles (now 10 Frontier Force Regiment) then commanded by Lt. Col. Shah Khan provided officers and soldiers for the film. It was a motorized infantry battalion and part of 3rd Armoured Brigade. The Frontier Force Regiment and Frontier Force Rifles was nick-named PIFFERS. Some other officers, Agha Aman Shah and Shah Rafi Alam were also assigned to assist the film crew.  In fact, in the movie Colonel Savage was commanding First Battalion of 13th Frontier Force Rifles. One can see some grizzly PIFFER Junior Commissioned Officers (JCOs) in the movie; many probably veterans of Second World War. In one scene, Victoria and Savage dance with PIFFER soldiers while regimental band is playing the tunes. There is an incident involving Lt. Col Aslam Khan and he was probably commanding 113 FFR. It is not clear whether it was a coincidence or someone in Pakistan army had read the novel as in the novel Col. Rodney Savage commands a fictional 1/13 Gurkha Rifles and in movie he commands real 1/13 Frontier Force Rifles. These battalions were part of 7 Golden Arrow Division and in movie Golden Arrow is visible on arm of Colonel Savage. When venue of shooting was changed from India to Pakistan, Gurkha Rifles was replaced by Frontier Force Rifles and Johnny Gurkha had to make room for the Pathan. Most of the soldiers were Pathans and there are some exchanges in Pushto in the film.

It was also in Bhowani Junction that moviegoers saw the brief appearance of a young local Pakistani student, who was later to become one of the biggest stars of the Pakistani movie industry. This young lady was Neelo, who played the role of a news reporter in what was her first appearance before the camera. Sadly, she left this world for her final journey earlier this year. Neelo probably is the only instance of a Pakistani film actress, who made her memorable screen debut in a Hollywood colored film.

The film was completed in England and Hollywood. First sneak previews caused uproar about many aspects of the movie, including race. Inter-racial relationship was a taboo in Europe and United States of the 1950s. Many scenes where Victoria kissed Anglo-Indian Patrick and Indian Ranjit were deleted despite the fact that all actors were either British or American. In the novel, Patrick and Victoria narrate their own experiences but in movie Colonel Savage is the sole narrator. The ending was also completely changed. In the novel, Victoria finally joins Patrick but film ending was revised where Patrick dies a heroic death and Savage would come back from early retirement in England to join Victoria in India. Film director George Cukor actually cried about all these changes. He protested loudly with tears in his eyes and said. “I made a good movie here. You are crucifying this movie and turning it into a goddamn Hollywood love story, and its going to be crap”. Ava was also in agreement that a good film was seriously damaged, over-simplified and over-sensationalized; after the preview, audiences didn’t approve certain aspects of the film, but overall, the film still left a lasting impact.

Whatever one may say, the acting was superb. The story is intelligently suspenseful. Cukor directed with a sure hand and the photography is stimulating, giving one a rich sense of that period of British history. The film had an intimacy even as it was epic in scope, something that rarely happens in political films. It also closes on an interesting note, as it has Gandhi on the train that Darvay is willing to risk his life to blow up.

If Bhowani Junction was released in its original form, it was likely to become an epic film in league with Gone with the Wind and Lawrence of Arabia. However, the film was still a huge success. Ava also liked her role in the film. In her last days, Ava would watch her old movies alone. She watched Bhowani Junction and called Stewart Granger in Los Angeles asking him Were we really that beautiful, honey? Stewart is reported to have replied later, You were, my sweet. You still are. Rest in peace Ava; You are beautiful in the eyes of a whole generation enchanted by you.

The railway scenes in the film which were shot at Lahore Railway Station and other parts of NW Pakistan used SGS 2473, HGS 2264 and HGS 2203 locomotives.  However, one can see occasional glimpses of standard gauge and other railway stock from England, never used in Pakistan. So, some creative photography was clearly involved.

While most steam locomotives using the metre gauge lines were withdrawn from service in Pakistan by 2010, one can still see the 610mm John Fowler 17208 of 1927 steaming away at the Changa Manga forest railway yard.  For the more adventurous, the preserved SGS 2473 and HGS 2264, as well as HGS 2203 class locomotives, the types used in the film, can still be seen at the Mughalpura locomotive workshop in Lahore.

Bhowani Junction may be a fictional town, but these beauties are real and carry with them thousands of stories and many pages of history.  Stretch your imagination a bit and you may see Ava Gardner waving at you from one of the windows, or you might even catch a glimpse of Stewart Granger, the appositely named Colonel Rodney Savage!