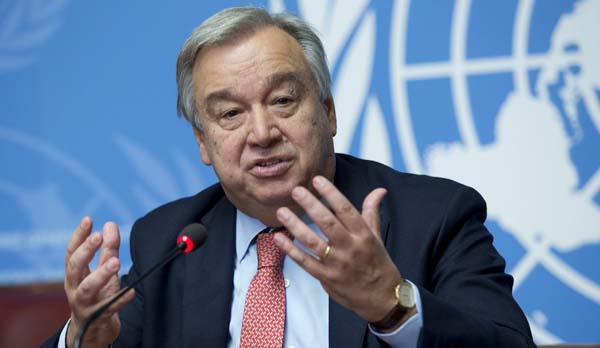 The UN chief on Monday declared the world “at war” against Covid-19, as India’s death toll crossed 300,000 and Japan opened its first mass vaccination centres — just two months before the start of the Olympics. United Nations Secretary-General Antonio Guterres urged governments to apply wartime logic to stark inequalities in the response to the pandemic, warning the crisis was far from over despite rapidly advancing vaccination rollouts in wealthy parts of the world. “Unless we act now, we face a situation in which rich countries vaccinate the majority of their people and open their economies, while the virus continues to cause deep suffering by circling and mutating in the poorest countries,” he said.

Deadly outbreaks in India, Brazil and elsewhere have pushed the global death toll past 3.4 million, even as rich countries such as the United States, Britain and Israel have eased restrictions. India has witnessed horrific scenes in recent weeks with severe shortages of oxygen at hospitals and crematoriums overwhelmed, although the number of new daily infections has fallen in big cities.

However, experts say the real numbers of deaths and infections in India — fuelled by a new coronavirus variant and “superspreader” events such as mass religious festivals — are probably much higher than the official figures. “We are seeing the bodies along the river Ganges which don’t seem to be recorded as Covid deaths but are very likely to be Covid deaths,” Ashoka University biology professor Gautam Menon told AFP.

India has administered close to 200 million vaccine shots, but experts say the programme needs to be ramped up significantly to bring the virus under control.

Another Asian country that has faced criticism over a slow inoculation rate is Japan, where the first mass vaccination centres opened on Monday.