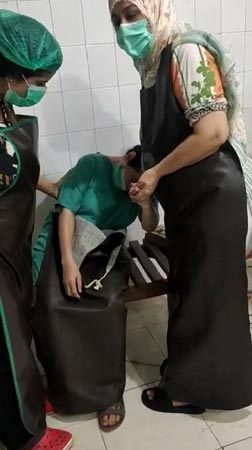 Precarious conditions continue to persist at Shaikh Zaid women hospital Larkana despite a budgetary allocation of Rs two billion per year. The explicit grim conditions were exposed on Saturday when Dr. Lachhmi fainted in the operating theater while operating a patient, due to poor air conditioning, and the video of the incident went viral.

The video shows the worsening condition of the unconscious doctor, in which she is complaining about air conditioning as the mercury rises. However, as the doctor faints, her fellow doctors rush to support her and struggle to bring her back to consciousness.

Lack of facilities and videos of filth in the operating theaters of Shaikh zaid women hospital have come to light even before this incident, but no actions have been taken by the authorities. On the other hand, when contacted for their version of the incident, the Medical Superintendent and other members of the administration didn’t respond to the request.