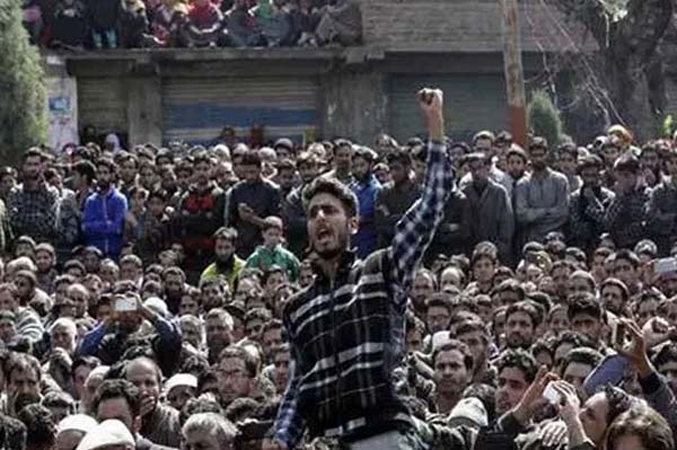 SRINAGAR: Complete shutdown was observed and a march was also held towards Mazar-e-Shuhada at Eidgah in Srinagar on Friday to mark the martyrdom anniversaries of late Hurriyat leaders Mirwaiz Maulvi Muhammad Farooq and Khawaja Abdul Ghani Lone, as well as the martyrs of Hawal massacre.
Call for the shutdown and the march has been given by the All Parties Hurriyat Conference and Mirwaiz Umar Farooq for paying rich tributes to the martyred leaders. The secret agencies agents had shot dead Mirwaiz Muhammad Farooq after barging into his residence in Srinagar on May 21 in 1990. As many as 70 mourners were killed in Hawal area of the city when Indian troops opened fire on the funeral procession of the martyrs.
About 12 years later on the same day, Khawaja Abdul Ghani Lone was also martyred by the agents when he was returning from Eidgah after addressing a public gathering. Besides observing strike and conducting the march, Mirwaiz Umar Farooq appealed to the Kashmiri people to hold prayer meetings all across the occupied territory.
He urged the people in Azad Jammu Kashmir, and all across the world to hold protest rallies and prayer meetings. As per the program, special prayers offered at Faisal Masjid in Islamabad. In their separate statements, leaders of Hurriyat Conference, Democratic Freedom Party and the National Front said that the services and sacrifices of Mirwaiz Muhammad Farooq and Khawaja Abdul Ghani Lone for the political rights of Kashmiri people and resolution of the Kashmir issue would always be remembered.
They said that the Kashmiri people had not forgotten their martyrs and would continue their mission till it reached its logical conclusion. In a statement, National Conference President Dr Farooq Abdullah said that the late Mirwaiz was a persuasive, forceful and well-versed orator with unparalleled depth of insight and Khawaja Abdul Ghani Lone was an accomplished political leader and a distinguished legislator.
In her statement, People’s Democratic Party chief Mehbooba Mufti lauded the role of Mirwaiz Muhammad Farooq and Khawaja Abdul Ghani Lone in the peaceful struggle for the resolution of the Kashmir issue. Hurriyat leaders Muhammad Farooq Rehmani, Zahid Ashraf, Syed Aijaz Rehmani and Abdul Majeed Mir also eulogized services and contributions of Mirwaiz Muhammad Farooq and Khawaja Abdul Ghani Lone for the Kashmir cause.
On the other hand, posters pasted in various parts of the territory asked the people to make the program a success. The posters were pasted by the Jammu Kashmir Young Mens League and Youth Wing of the Democratic Political Movement. APHC leader Hakeem Abdul Rasheed strongly condemned the abrupt surge in cordon and search operations by Indian troops in the most critical situation when people remain confined to their homes because of COVID-19 pandemic.