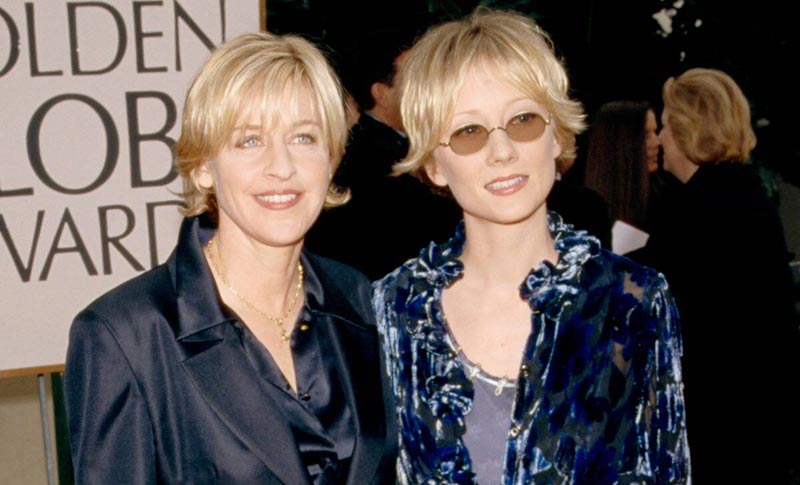 Anne Heche continues to have a little fun poking at her past. In her latest TikTok video, the All Rise actress took part in the platform’s shapeshifting challenge, and the video opens with the intriguing question, “Who do you think I’ll get?”

The wildly popular filter allows users to “shapeshift” into a different person, generally one that resembles them. Once a snap is taken, the app chooses a face that is supposed to serve as the best look-alike.

Naturally she transformed into her ex, Ellen DeGeneres. Right after Anne’s real-life photo transforms into a 1994 throwback of Ellen on a red carpet, her filtered voice is heard saying, “OMG, not her.”

The 51-year-old star posted the clip with the caption, “Disappointed but not surprised. #shapeshifting #joke.”

Perhaps the ’90s red carpet moment brought up some bad memories. Anne recently revealed in another TikTok that Ellen, who she split with in 2000 after three years of dating, didn’t want her to “dress too sexy.”

As proof, Anne included a photo of them attending the 1998 Golden Globes, making note of her velvet gown and sheer duster.

“Why do I look like a hippie?” she questioned in the April 27 clip. “It’s because Ellen didn’t want me to dress sexy. Ah, bye. No!”

In her recent TikTok, she also dismissed her first shapeshifting match, the actress attempting a second take that lands on fellow star Charlize Theron instead. She reacted happily to the match, stating, “Not mad about that.”

But it was on the last take, that Anne nailed a perfect match: A stunning photo of herself.

You know what they say-third time’s a charm!