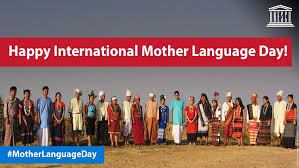 On February the 21st each year International Mother Language Day is celebrated globally under the auspices of the United Nations (UN). The beginning of celebrating this day is not very old. The General Conference of the United Nations Educational, Scientific and Cultural Organization (UNESCO) proclaimed it in November 1999 which was welcomed by the UN General Assembly in its 56th session in 2002 vide resolution number A/RES/56/262. The day has been celebrated yearly since then. On 16 May 2007 the United Nations General Assembly in its resolution A/RES/61/266 called upon Member States “to promote the preservation and protection of all languages used by peoples of the world”. By the same resolution, the General Assembly proclaimed 2008 as the International Year of Languages, to promote unity in diversity and international understanding, through multilingualism and multiculturalism and named UNESCO to serve as the lead agency for the Year. For every year this day is associated with a theme. This year (2021) the theme is “Fostering multilingualism for inclusion in education and society”. The theme recognizes that languages and multilingualism can advance inclusion, and the Sustainable Development Goals focus on leaving no one behind. UNESCO believes education, based on the first language or mother tongue, must begin from the early years as early childhood care and education is the foundation of learning.

The experts around the globe agree that the mother tongue is valuable due to several reasons. Mother’s tongue is vital in children’s cognitive development besides reasonable thinking and the emotions of people. Being fluent in the mother tongue, alternatively known as the native language, benefits the child in numerous ways. It connects him to his culture and supports the learning of other languages. Children first comprehend what is around them through the language they hear their mother communicating in even before they are born and throughout their lives. Researchers are showing concern that children across the developing world are learning very little in school, a reality that can be linked to teaching that is in a language they do not fully understand. It is a practice that leads to limited or non-existent learning and acquisition of knowledge and skills, alienating experiences, and high drop-out and repetition rates. To improve the quality of education, language policies need to take into account mother-tongue learning. Models of education that ignore the mother tongue in the early years may prove unproductive, ineffective having a negative effect on children’s learning. Mother-tongue education at least in the early years can enable teachers to teach, and learners to learn more effectively. An oft-quoted sentence of great Nelson Mandela is “If you talk to a man in a language he understands, that goes to his head. If you talk to him in his language that goes to his heart”.

According to Ethnologue, about 7100 languages are spoken in the world of which 90 percent are spoken by less than 100,000 people, suggesting thereby that some languages are spoken by very tiny communities, in some cases only a few hundreds. A large number of such languages are facing the threat of extinction. According to estimates every two weeks a language disappears taking with it an entire cultural and intellectual heritage. At least 43% of the languages spoken in the world are feared in danger. Only a few hundred languages have genuinely been given a place in education systems and the public domain, and less than a hundred are used in the digital world.

In Pakistan about seventy-four languages are spoken. Urdu, the country’s national language is understood all over the country and also used as the official language along with English. Major provincial languages are Punjabi, Pashto, Sindhi, and Balochi. Some other familiar languages include Saraiki (Southern Punjab), Brahui (Central and East-Central Balochistan), Shina (Gilgit Baltistan), Kashmiri (Azad Kashmir), Hindko (A part of Khyber Pakhtunkhwa). Still, other minor local languages, among many, may be cited as Balti, Bhaya, Dari, Dogri, Gujrati, Gujarati, Kohistani, Marwari, etc. In the following table trend of major languages registered as mother tongue in the last three censuses are presented.

It may be seen that Sindhi, Pashto, and Balochi speaking numbers have maintained the trend in line with the movement in the population of the respective areas. However Punjabi shows a precarious behavior with a number of Punjabi speakers showing a sharp decreasing tendency during the recent four decades, not commensurate with the respective population curve. This trend is likely to baffle and agonize the clientele and patrons of this centuries-old language endeared to tens of millions of hearts. Looking at these dismal figures one cannot help taking those analyses seriously that include Punjabi in the range of languages under the threat of extinction. In view of its yet large speaking base, it may not seem an imminent menace but the trend itself is alarming.

A sympathetic mind will definitely tend to ponder upon the underlying reasons and factors responsible for this emerging sad scenario. While minor languages spoken by very small communities and tribes all over the globe may die out with annihilation of these communities and tribes themselves or assimilation into mainstream languages, the researchers and experts have consensus that globalization and urbanization are eating into some big languages despite being the means of communication of quite large populaces. Globalization, mainly uniting peoples in the economic and political arena, only requires individuals, firms, and governments to keep abreast with a functional level of information, knowledge, technology, business, and norms that are in vogue in order to manage and manipulate mundane geo-political and socio-economic dynamics. Major languages like English, followed by French, Spanish, Italian, and now Chinese and Russian provide a common handy medium of exchange for this purpose. The treasures of social, cultural, and civilization seldom appeal to the present capitalistic mind. Urbanization is a common and continuous process that goes on because of economic expedience and social preferences. Employment opportunities and social amenities available in big cities and towns attract rural classes to migrate there. Once in these urban establishments, the migrants need to adapt to prevalent conduct and communication needs there. In Pakistan major common urban medium of exchange is Urdu and to some extent English among the elite. Hence the rural migrants readily learn and use these languages besides their mother tongues.

In the case of Punjabi, the issue however goes beyond mere urban adaptation or facilitation, rather it has a certain degree of socio-cultural insecurities amassed over decades. It is a common observation that our Pashtoon, Sindhi, and Baloch brethren exhibit commendable confidence while discoursing mutually in their mother tongues even at formal occasions whereas Punjabis somehow have been made to believe Punjabi not to be a language of civility, decorum, and etiquette. It is commonplace to see youngsters with plain Punjabi-speaking ancestry feel shy and inferior to speak Punjabi resulting in a steady decline in patrons of this language of love and adore used by mystics, poets, and intellectuals through centuries. The above-given statistics confirm it. Unfortunately, over decades and decades our films, dramas, novels, and literature, by commission or omission, have been portraying Punjabi characters as cranky, hapless, unintelligent, uncouth, ill-tempered, and with all negative nuance. It is not common to still come across situations where Punjabi speaking is taken as a synonym for being illiterate. The writer is of the view that one plausible reason for Punjabis to let their mother tongue give an easy way to Urdu might be that in script and phonetics Punjabi is closer to Urdu as compared to our other provincial, regional, and local languages. Hence in order to be a part of the urban class, Punjabis tend to swap their own language totally instead of using Urdu as a second language. The reader is requested here to bear in mind that the plight of Punjabi consumed a relatively major portion of this article, otherwise every language and dialect of the homeland is dear and close to the writer’s heart.

There prevails a view that if we are disposing of our daily socio-economic routines in Urdu and English, languages of necessary life business, then what is needed to stick to the mother tongue. It may however be appreciated that by divesting of mother language does not only mean leaving behind the language of our ancestors, rather it deprives us of centuries of art, literature, poetry, cultural heritage, and human experience necessary for anthropological advancement and progress.

The UN General Assembly has proclaimed 2022-2032 as the International Decade of Indigenous Languages. This decade is expected to bring more knowledge and support of Indigenous languages and cultures. There is a need that conscious and concerted efforts are made in line with the UN proclamation. Pakistan’s all languages possess great treasures of history and civilization that need to be preserved and passed to future generations. This is the time that respective governments make efforts to provide safeguards to native languages. At the provincial level, such languages may be part of the curriculum especially at the early stages of education. Writers, poets, and educators of native languages may be patronized and facilitated. Periodic events, seminars, and conferences may be held to further this cause. At the household level, we should converse and communicate in mother tongues. We should understand ourselves and teach our children that civilization and mannerism are not associated with any particular language, rather it comes from one’s conduct and character. One cannot imagine future glories without honoring and preserving past laurels.

Retired as Joint Economic Adviser to the Government of Pakistan, the writer works as a development consultant, writer, and analyst – acrandhawa@yahoo.com