MELBOURNE: Jessica Pegula continued her dream run at the Australian Open on Monday with a 6-4 3-6 6-3 win over fifth seed Elina Svitolina to set up an all-American quarter-final against Jennifer Brady, who beat Croatia’s Donna Vekic in straight sets. World number 61 Pegula has been one of the surprise packages in the women’s draw, beating 12th seed Victoria Azarenka in her opening match before racing into the fourth round with quickfire wins over Sam Stosur and Kristina Mladenovic. Pegula, who struggled in the second set, regrouped in the decider, breaking Svitolina in the fourth game before locking down her first win over a top 10 opponent. The 26-year-old Buffalo, New York, native, whose parents own the city’s NFL and NHL franchises, almost gave up tennis after being sidelined by hip and knee injuries for significant spells. 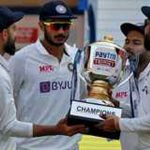