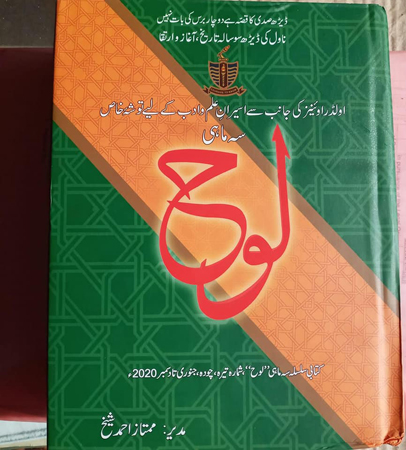 It is amazing to see a voluminous ‘novel’ number of quarterly literary journals. Lowh has seen light of the day after one year’s toil only due to passion and hard work of its editor Mumtaz Ahmad Sheikh.

It covers essays on and excerpts from the novels written 1862 to 2020. The journal is divided in four sections. Naturally it took a year to come into reality; collecting and editing the essays and of course not forgetting the Pandemic impact. Mumtaz did not lose heart and continued collecting the material and by the time he did that, six to eight months had passed. Then the selection and editing took few months. He believed that this selection was not the last word on the novels written during this period. So he included a few essays in the beginning on the history and advent of novels writing. During this phase he found that 1862’s novel ‘Khat-e-Taqdeer’ was the first novel in Urdu though it was not accepted widely as such and Deputy Nazir Ahmad’s ‘Marat ul Aroos’ was considered as the first one. Mumtaz however starts his Lowh’s novel number with ‘Khat-e-Taqdeer’.

Excellent essays on novel’s history are given by Dr. Mirza Hamid Beg and Dr. Rasheed Amjad for the period 1862 to 1900. Then selected chapters from the selected novels are reproduced. Mirza Hamid Beg observes that many connoisseurs of Urdu novel fail to distinguish between a novel and a ‘Tamseeli Qissa’ (dramatic story). Karimuddin Panipati and Deputy Nazir Ahmad ‘Tamseeli Qissa’ have been considered as novels. Indeed, these writings were a step forward towards establishing novel as a domain of literature. It took 228 years to reach to a novel with living characters. Mullah Wajih’s Tamseeli Qissa ‘Sab Ras’ came in 1636 and Karimuddin Panipati’s one with human characters came in 1862. The selected novels of this era are Fasana-e-Azad – 1878 by Ratten Nath Sarshar, Umrao Jan Ada – 1899 by Mirza Hadi Ruswa, Firdaus-e-Bareen – 1899 by Abdul Haleem Sharer.

Two essays on novel’s history and trends these novels followed have been written by Musharaf Alam Zauqi and Dr Amjad Tufail for the era 1900 to 1947-48. The former feels that in the 21st Century, so many changes have been observed in the trends that the novels followed that any debate of this issue is fruitless

Two essays on novel’s history and trends these novels followed have been written by Musharaf Alam Zauqi and Dr. Amjad Tufail for the era 1900 to 1947-48. The former feels that in the twenty first century so many changes have been observed in the trends that the novels followed that any debate of this issue is fruitless. According to him the story in a novel is scattered in a vacuum in which the writer jumps to the shades he desires to capture. It is not necessary that any shade is visible in a novel. It all depends on the writer. This colour could be different from the Islamic angle in Bano Qudsia and Muhammad Ahsan Farouqi. Then the religious and character building found in Deputy Nazeer Ahmad’s novels still exists today. Realism beyond Mirza Hadi Ruswa, Sarshar’s historical and Rashid Alkhairi novels fail to counter the invasion of Progressive Writers. Ismat Chughtai and Qurat ul Ain Haider see changes in sophistication attitudes. The era witnessed the influence of India’s Partition to Corona Pandemic now. The selected novels from 1900 to 1947 are Gaudan by Prem Chand, Gurez by Aziz Ahmad, Shikast by Krishen Chander, Terhi Lakeer by Ismat Chughtai and London Ki Aik Raat by Sajjad Zaheer. Many criticize even today as to the latter was a novel as such.

The third section of the journal contains an essay titled ‘Tareekhi Ajmali Khaka’ (historical romantic sketch) by Muhammad Hameed Shahid and as essay ‘Novel Ka Safar’ (journey of novel) by Dr. Muhammad Ashraf Kamal. 42 selected chapter from the same number of novels follow these essays; Sham-e-Awadh by Muhammad Ahsan Farouqi (1948), Nagari Nagari Phira Musafir by Nisar Aziz Butt (1955), Aag Ka Dariya by Quratul Ain Haider (1959), Khuda Ki Basti by Shaukat Siddiqui (1959), Aik Mamooli Larki by Balwant Singh (1959), Alipur Ka Aili by Mumtaz Mufti (1961) – this famous novel is the depiction of mental turmoil of a teenager Ilyas nicknamed as Aili who looks after the needs/errands of his father and watches his mother serving his father’s second wife like a servant.

The novel that follow are; Aangan by Khadija Mastoor (1962), Ik Chadar Maili Si by Rajinder Singh Baidi (1962), Aafat Ka Tukra by Fazal ur Rehman Khan (1962), Udaas Naslain by Abdullah Hussain (1963). The latter is a story of a god forsaken village Roshanpur located away from the mainstream. The population was heavy with non-Muslims. Ahmad Din started living in this village from a young age and hence knew the inhabitants and the stories linked with them. One story is about the Roshan Ali Khan’s belief in saving the life of a guest in his house even if he is an enemy. He resists Indian mob who want Roshan to hand over Col. Johnson to them. It is known that later whenever Col. Johnson visited India used to come for hunting at Roshanpur; a 500 square land gifted to Roshan Ali Khan by the British.

Other novels are Gurag Shab by Ikram Ullah (1978), Basti by Intizar Hussain (1980) and Raja Gidh by Bano Qudsia (1980). The latter is a famous novel. According to Wikipedia, Gidh is the Urdu word for a vulture and Raja is a Hindi synonym for king. The name anticipates the kingdom of vultures. In fact, parallel to the main plot of the novel, an allegorical story of such a kingdom is narrated. The metaphor of the vulture as an animal feeding mostly on the carcasses of dead animals is employed to portray the trespassing of ethical limits imposed by the society or by the religion.

These novels are followed by Khushion Ka Bagh by Anwar Sajjad, Dasht-e-Soos by Jamila Hashmi (1983). The latter novel starts with a Caravan carrying luggage for Damascus stopping in a mosque and deciding to stay in the adjoining inn. According to Site Goodreads, Dasht e Soos is a novel about story of Hussain bin Mansur Hallaj. The story of Hallaj is both fascinating and sad. Hallaj an anxious and curious spirit had questions unanswered. He was seeking some answers and wanted to get those like Hazrat Musa (Moses) got at Kohe Tur (Mount of Sanai). He wanted to reach to God like where there is no Hijab (veil) left, so he indulges himself into such prayers and meditation that were tough and beyond the capacity of normal human beings and they bring to him such awareness which he could not muster and in mystification said something that took him to the woods and was crucified. But that was not the only reason for his crucifixion, there is lot in between, some relations of hate and love. Love not only with the immortal and pristine but also with a mortal and beautiful princess. Which Love finally takes him to gallows is an interesting tale narrated in this novel.

Other novels selected by the editor are Kai Chand They Sirasman by Shamsur Rehman Farooqi (2005), Mitti Adami Khati Hei by Muhammad Hameed Shahid (2007), Lei Saans Bhi Ahista by Musharaf Alam Zauqi (2011), Maut Ki Kitab by Khalid Javed (2011), Kanjri Ka Pull by Younis Javed (2011), Khwab Saraab by Anis Ashfaq (2011), Al-Asifa by Hassan Manzar (2012), Baalon Ka Ghucha by Khalid Toor (2013), Jage Hain Khwaab Main by Akhtar Raza Saleemi (2015), Akhri Sawarian by Syed Muhammad Ashraf (2016), Anarkali by Mirza Hamid Beg (2017). About the last name in this list, Mirza Hamid Beg uses the conversations of the intellectuals among characters in his novel to explain various historical facts about the mystery of death of Anarkali, one of the courtesans in Emperor Akbar’s court. This reviewer shall reproduce an excerpt from his review published on May 15, 2018 ‘Mir Naseem Zafar stated that he was a staunch Lahori and he could vouch for the fact that Fauq had written novel titled ‘Anarkali’ in 1899 published by Hakim Ram Krishen General Books Merchant, Katra Tarakhshan, Lahore. In this novel Anarkali was shown as a courtesan in Akbarabad Court and that her father’s name was Mirza Aijaz. Many chits were pooled in for to propose the sentence to be given to Anarkali and the one selected said that she was to be buried alive in a wall. It was discovered that this version became the basis of a Bengali Play. Its English translation was published in ‘Modern Review’ in Calcutta in 1919. Then its Urdu version was published in Abdul Halim Sharer’s ‘Dilgudaz’. Then Dr. Abdul Alim mentioned Anarkali, Gohar Abdur Rehman, Abas Ali Abas Dehelvi and Sri Krishen Khatri Kanpuri in his doctoral dissertation. He claimed that Syed Imtiaz Ali Taj’s play was a plagiarized version of Ambala’s drama writer S. K. Feroze (Page 69). (This claim needs to be investigated). Mukhtar Nabi Qureshi’s ‘Dilaram Ka Anjaam’, Saghar Siddiqui’s poetic play ‘Anarkali’. Mahmud Hashmi’s ‘Anarkali Ki Wapsi’ and Rehman Muznib’s ‘Anarkali’ is no match’.

The names of the last few novels included by Mumtaz are Habs by Muhammad Ilyas, Banaras Waali Galli by Fayyaz Riffat, Saasha by Muhammad Shiraz Dasti (2018), Gul Meena by Zaif Syed (2019), Sood-o-Zayan Kei Darmeyan by Khalid Fateh Muhammad (2020) and Kark Naath by Hafeez Khan (2020). This issue of Lowh gave me an excuse to enjoy reading the novels and decipher the essence of the themes touch upon. This collection therefore becomes the reference book for the students of Urdu novels and its growth.