Deputy Commissioner Malakand directed to the police for taking action against the illegal re-assembled and cut vehicle and released a notification in this regard. 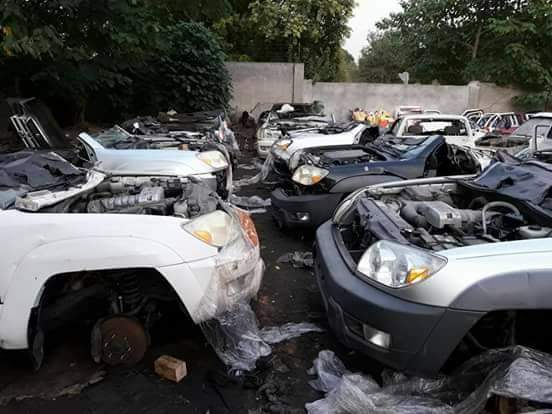 The delegation of lawmakers from all districts of Malakand and transporters met to Commissioner Malakand “Zaheer-ul-Islam” in Swat on Monday, asked him to find a suitable way to compensate the vehicles owners. They said ” the local people started the business of reassembling the cut vehicles with the hard-earned money their relatives had brought from Gulf countries. Now the government and the administration want to end their source of livelihood. They said that the government had charged tax on import of these auto-parts and now taking the vehicles to seize. They demanded Commissioner Malakand to stop operation against cut vehicles and asked to find a suitable way that would not suffer the poor people”. DIG Swat Ijaz Khan was also present in the meeting.

At the meeting, Commissioner Malakand “Zaheer-ul-Islam and DIG Malakand Ijaz Ali Khan agreed with the delegation and given surety that reassembled vehicle will not be seized, the administration will dismantle the vehicles and would be given back to the owners. The owners could sell it in parts. He added that there is a large number of illegally reassembled and cut vehicles across the Malakand Division and legal action is necessary by all mean.

Amjad Ali Shah, JI ticket holder said “Due to militancy the people of Malakand Division are badly affected and the majority of peoples bread are attached with cut vehicles business. Thousands of people earning their bread with these vehicles, Seizing of the poor people’s vehicles is cruelty. He demanded the Government to find a suitable way in favour of poor people. He added that the Malakand Division is a disaster-affected area and action against the cut vehicle is equal to snatch the mouthpiece of poor people.

“There are thousands of cut vehicles in Malakand Division, mostly peoples sold their properties and other valuables to buy this cheap price vehicle, if the Government seized, the people will lose their way of earnings. Already there is unemployment and it will raise it more. Said Salman Khan, a resident of Mingora Swat.

Zafrullah Khan, a carmaker said, “Not only the car owner will be affected, but thousands of carmakers, mechanics and painter will also lose their employment. There are 90% of vehicles cut in Malakand division and it is already tax-free zone, then why this decision? He asked.

Asghar Khan, an advocate of High Court said “The decision is according to the law but it includes only those vehicles which chassis number is tempered are re-welded. Body change and reassembled vehicles not included. People are worried but the law doesn’t apply on general body cut vehicles.

DPO Swat Qasim Ali Khan ordered all police officials to take action, He added, that they performing their duty in the light of High Court orders. On the other hand, civil society decided to challenge the High Court decision in the Superior.