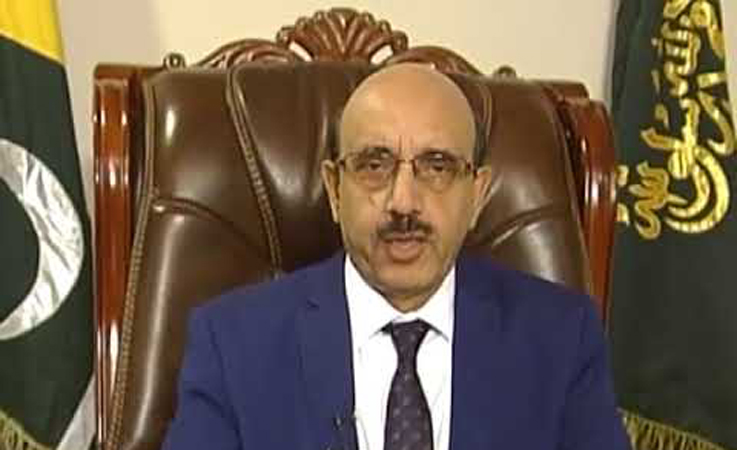 Spurning India’s propaganda against Turkey, the AJK President Sardar Masood Khan has said that Turkey’s support to the right to self-determination of the Kashmiri people has left the Indian rulers perturbed and frustrated.

Commenting on the Indian media reports that Turkey is preparing to send Jihadi fighters to Kashmir, Masood said that the freedom struggle in Indian Occupied Jammu and Kashmir is indigenous and Turkey or any other country of the world has nothing to do with it.

“India’s propaganda is rubbish and a crude attempt to undercut Turkey’s political and diplomatic support for Kashmiris struggling against Indian oppression and tyranny. It won’t happen,” said the President.

He maintained that the Indian media reports that the Turkish fighters fighting in eastern Syria were now preparing to fight the Indian Army in occupied Kashmir, is not only unfounded and baseless but also a deep-rooted conspiracy to malign the indigenous liberation movement of the Kashmiri people. Such Indian tricks have not succeeded in the past and will not succeed in future as well, he added.

The AJK president said that India would not be allowed to hide its crimes against humanity and its gross violation of human rights in occupied Jammu and Kashmir. Instead of unleashing false and unfounded propaganda, India must fulfil its international obligations, stop repression in occupied Kashmir, prevent its army from trampling human rights, and immediately cease the settler-colonialism in the disputed territory of Kashmir.

“India must fulfil its responsibility towards creating conditions conducive for a fair and a free plebiscite in accordance with the UN resolutions to determine the will of Kashmiri people regarding their future,” he asserted.

The AJK president while describing crackdown against the social media users in occupied Kashmir as illegal and undemocratic said that the Indian Army had set up torture cells and interrogation centres in the different parts of the occupied Valley including Srinagar where the social media activists raising their voice against the repressive actions of the Indian regime are severely tortured.

According to reports pouring in from the occupied territory, the cyber police of IOJK monitors social media posts of the youth studying in colleges, universities and educational institutions, and those who speak against the Indian state terrorism, liberation of Kashmir, and the right of self-determination are arrested. They are tortured in various concentration centres, and their cell phone, laptops and other equipment are seized in order to prevent them from showing the outer world the true picture of occupied Jammu and Kashmir.