CPDI launches report on state of budget transparency in Pakistan

Centre for Peace and Development Initiatives has launched its annual report on State of Budget Transparency in Pakistan. 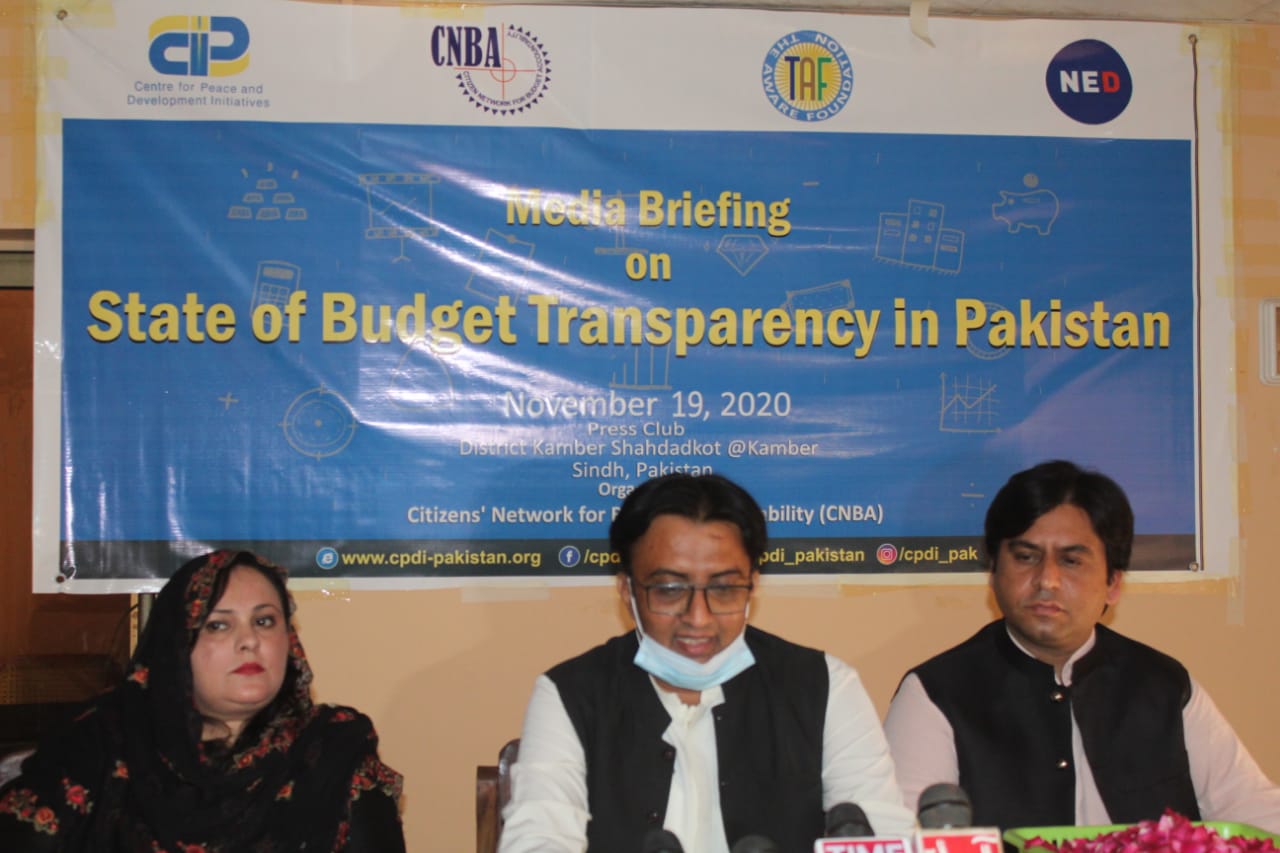 The report points out shortcomings in the budgeting process at the federal and provincial levels and states that budgets in Pakistan should be prepared in consultation with the stakeholders and information should be shared with citizens proactively during all stages of budget making and budget implementation process.

This was told by renowned social activist Mr. Muhammad Umar alias Omar Gul Buriro-CEO – The Aware Foundation (TAF) Pakistan during a press conference here at press club Kamber. The event was organized by The Aware Foundation (TAF) under the banner of Citizens’ Network for Budget Accountability (CNBA). The CNBA is a network of more than 60 civil society organizations working on the budget transparency in 110 districts of Pakistan.

While talking with media, during the press conference Mr. Buriro said that CPDI had always strived for openness in the budget at every level. For the past decade, CPDI had been gauging the transparency of district budgets all over the Pakistan but this year the focus was on federal and provincial levels. This report not only reviewed budget transparency in Pakistan but also tested the effectiveness of access to information laws in Pakistan in obtaining budget related information.

Explaining the findings of the report, Mr. Imran Ali told that the report consisted of two parts. The first section dealt with requests for information to various federal ministries and provincial departments seeking information about the various stages of the budgeting process. During the process, 150 requests for information were sent to selected federal ministries and provincial departments to test transparency in the budgeting process. Out of 36 applications sent to federal ministries, only 6 replies were received, and against 114 applications to various provincial departments, only 2 replies from Khyber Pakhtunkhwa and 4 from Punjab were received while no action was taken by Balochistan and Sindh on requests for information. The second section examined the comprehensiveness of budget documents and citizen participation in budget making process.  Here the federal government ranked first with 71 points out of maximum 181 points. The Punjab is runner up and Balochistan is the second runner up. Sindh and KPK occupies the last two positions. He further added that Pakistan’s dismal performance on Open Budget index in the recent years have raised many questions on the state of budget transparency and citizens participation in budget making process.

Speaking to the media, women activist Ms. Ashyia Memon said that all the questions raised in the report on budget transparency were noteworthy and the government should take immediate steps to address them. The issue of providing information by the government should be taken seriously and budget proposals should be widely discussed within citizen groups, government agencies and other important stakeholders. Citizens’ participation in the budgeting process should be legally protected and government agencies should consult with citizens during the various stages of budgeting. He also demanded for enhanced role of parliamentarians during budget making and implementation stages. The budget should be presented to the assemblies at least three months before the start of the financial year. A transparent and open policy in consultation with the stakeholders should be formulated based on providing maximum information to the citizens.

The press conference is among the series of events that CNBA partner organizations are organizing throughout the country to raise awareness about budget transparency.