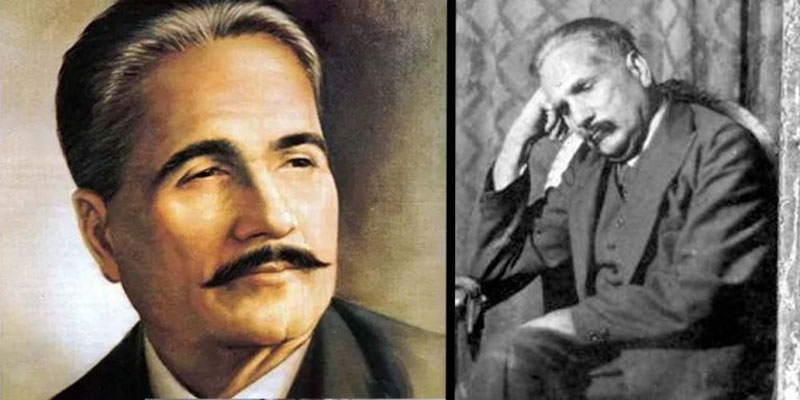 Pakistanis are celebrating the birth anniversary of Allama Iqbal as Monday will mark the 144th birthday of the national poet.

Apart from the government, different social and literary organizations have planned seminars, exhibitions, and conferences to honor Iqbal’s birthday, though all are in a low profile due to a fresh wave of coronavirus in the country.

Born on Nov 9, 1877, in the northeastern Sialkot city, located some 139 kilometers (89 miles) from Lahore, the capital of northeastern Punjab province, Iqbal is called “Mufakkir-e-Pakistan” — or the inceptor of Pakistan — as he conceived the concept of a separate homeland for the Muslims of then United India.

A descendant of a Kashmiri family that settled in neighboring Sialkot district in the 17th century, Iqbal attended Scottish Mission School Sialkot for his early education and graduated from the prestigious Government College Lahore in 1897. He earned his master’s degree in philosophy from the same institution in 1899.

He received a scholarship from Trinity College in Cambridge and graduated as a bachelor of arts in 1906. Iqbal earned a doctorate degree from Ludwig Maximilian University in Germany in 1908 with his thesis on the development of metaphysics in Persia.

The same year, he returned to Lahore and joined Government College University as a professor of philosophy and English literature. In 1922, he was knighted by King George V.

In his famous address in Allahabad, India, Iqbal outlined the vision for a separate homeland for Indian Muslims, who, according to him, are a distinct nation, and deserve independence. His address is known as the foundation of the “two-nation theory” that later paved the way for the foundation of Pakistan in 1947.

It was Iqbal who persuaded Mohammad Ali Jinnah, the founder of Pakistan, to return from England and lead the Indian Muslims in their struggle for a separate homeland. Jinnah returned to India in 1936 and became the president of the All India Muslim League, the founding political party of Pakistan.

Iqbal produced literary works in Persian and Urdu languages. Of his 12,000 verses of poetry, about 7,000 verses are in Persian. He wrote his first book Asrar-e-Khudi – a collection of his poetry that appeared in Persian in 1915. His other books of Persian poetry include Rumuz-i-Bekhudi, Payam-i-Mashriq and Zabur-i-Ajam. Iqbal’s Urdu works are Bang-i-Dara, Bal-i-Jibril, Zarb-i Kalim and a part of Armughan-e-Hijaz.

A series of his lectures were published by Oxford University Press as “the reconstruction of Islamic religious thoughts in Islam.” His tremendous work in both languages earned him the title of “Poet of East” by literary critics.

Many literary critics also see Iqbal as an extension of Sufi scholar Jalaluddin al-Rumi’s philosophy. His Persian poetry, in particular, is heavily influenced by Rumi, also widely known as Mevlana.

In his famous book Javednama, the famous poet advises his son, Javed Iqbal, that if he fails to find a wise friend in his life then associate with Rumi’s ideology because he knows the difference between reality and the mere appearance of things. Iqbal proudly described himself as a student of Rumi.

Dr Faleeha Kazmi, head of the Persian department of Lahore College for Women University, finds a deep-rooted relationship of Iqbal’s work in Persian with the common people of Iran.

“Iqbal, commonly known as Iqbal-e- Lahore [there], is very popular and well known not only in Iran’s literary circles but among the common people as well. At least some of Allama Iqbal’s verses in Persian are well known to every literate Iranian,” Kazmi told Anadolu Agency.

Iqbal Institute of Higher Studies in Mashhad city, which is operating under the patronage of the Iranian government, offers degrees in social sciences and engineering.

According to Kazmi, Iqbal’s poetic works like Zabor-e-Ajam were a source of inspiration for many young people who took part in Iran’s Islamic revolution in 1979. “Iranian people place Allama Iqbal in the same category as Rumi or Ferdowsi [Iran’s national poet],” she maintained.

Many see Rumi and Iqbal as a connection between not only the literary world but the common people of Turkey and Pakistan. According to Tehsin Firaqi, a former head of the Urdu department of Punjab University, Iqbal’s work inspired many Turkish poets and authors.

Apart from Rumi, he argued, several Turkish and Pakistani authors have equated Iqbal and Mehmet Akif Ersoy, Turkish author and poet of Turkey’s national anthem. Firaqi also recalled that besides his poetry, Iqbal’s famous book Reconstruction of Religious Thought in Islam was also translated into Turkish.

However, Firaqi, who also taught Urdu at Tehran University for three years, thinks that much collaboration and attention are required to highlight Iqbal’s work in Turkey. “The love and respect that Pakistanis find in Turkey is unmatched. So are our sentiments about Turkey. This historic affinity requires the literary figures from both sides to translate the works of poets and philosophers like Iqbal and Akif into Turkish and Urdu,” he asserted.