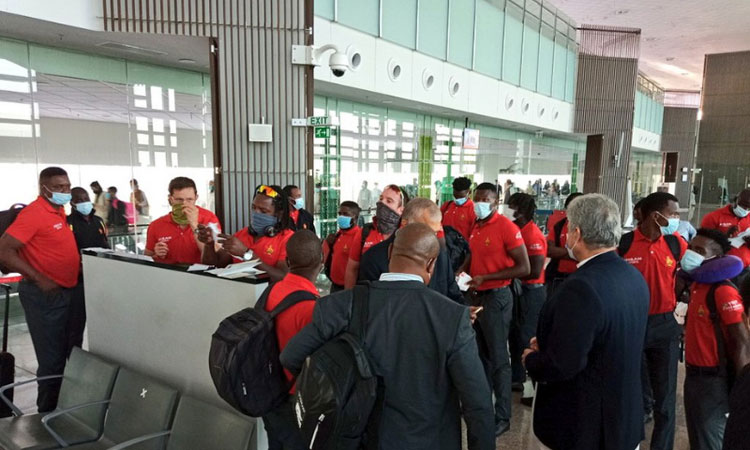 ISLAMABAD: The Zimbabwe cricket team arrived in Islamabad on Tuesday to play two limited overs series against Pakistan. Officials of the Pakistan Cricket Board (PCB) welcomed the visitors at the airport. Players of the Zimbabwe team – who are visiting the country after five years – will spend their first week (Oct 21 to 27) in quarantine in Islamabad. The team left on Monday morning from their home country with a travelling squad of 20 players. Zimbabwe will be without their head coach Lalchand Rajput for the upcoming tour of Pakistan after he pulled out over travel restrictions. A statement from Zimbabwe Cricket said that the Indian embassy in Harare had sought exemption for Rajput visiting Pakistan, citing travel guidelines issued by the Government of India for its citizens. The statement confirmed that in Rajput’s absence, bowling coach Douglas Hondo would take charge of the team during the tour. Rajput, 58, represented India in six international games — four ODIs and two Tests — between 1985 and 1987. He was appointed as Zimbabwe’s full time coach in August 2018, after the team’s failure to qualify for the 2019 World Cup.

Zimbabwe limited-overs captain Chamu Chibhabha believes his team have the ability to beat Pakistan in the series. While speaking to The Herald before departing for the tour, Chibhabha said every ODI game was important for his team as they begin their bid to qualify for 2023 World Cup. “Obviously, the guys are excited to go to Pakistan, the wait is over,” said Chibhabha. “We have played Pakistan before, and beat them, so we believe we can actually play well, compete and beat them. And, considering it’s the Super League games, each game that we play going forward is going to be important, considering that the more games we win gives us a better chance to qualify for the World Cup.” Zimbabwe captain added that his team are fully prepared to take on the hosts, despite not playing international cricket for a long period due to Covid-19 pandemic. Earlier this month, Zimbabwe Cricket had sent a five-person delegation to Pakistan to assess the arrangements for the teams’ bio-secure bubble. This will be Zimbabwe’s first tour of Pakistan since 2015, when they became the first Full Member to visit the country after the terror attack on the Sri Lankan team in 2009.

Pakistan face Zimbabwe in three One-day Internationals – all matches being staged in Rawalpindi from Oct 30 – followed by as many T20 Internationals in Lahore from Nov 7 to 10. The Rawalpindi matches will be part of International Cricket Council (ICC) Men’s Cricket World Cup Super League from which the seven top-ranked sides, apart from hosts India, will qualify directly for the ICC Men’s Cricket World Cup 2023. Pakistan selectors have dropped the trio of senior players — Sarfaraz Ahmed, Shoaib Malik plus fast bowler Mohammad Amir — while uncapped players Abdullah Shafiq and Usman Qadir along with youngsters Khushdil Shah, Mohammad Musa Khan and Zafar Gohar are part of the 22-member outfit. Leg-spinner Shadab Khan has been appointed as vice-captain in both ODI and T20 formats. Besides two uncapped and three inexperienced players, the rest of the 17 squad members are experienced as selectors have decided not to take the visiting Zimbabweans easy.