Lauding the services of Mudassar Bashir — a Punjabi writer, historian and editor 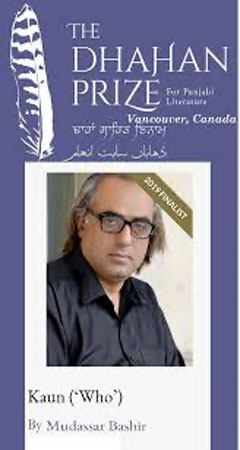 Mudassar Bashir is a Pakistani writer with editorial background. He is Professional author for more than 30 years, and has experience in Magazine, Newspaper and Article writing. He is author and researcher of twelve books on Fiction, Poetry and History in Punjabi and Urdu Literature. He is an expert in the history of walledcity of Lahore. At one time he used to walk through the streets of inner walled city of Lahore and that interest ended up in the shape of his book ‘Lahore Di Vaar’ and host/guest of various TV Shows on the subject.

Like any other poet or writer one had to join some company or create a vocation for meeting one’s daily needs and carry on with one’s passion simultaneously, Mudassar too joined Sui Northern Gas Pipeline Limited (SNGPL). He continued improving his educational and creative activities in parallel. He obtained degrees; Masters in Political Science, Urdu and History followed by MBA and Law. He organized music and literary sessions in Alhamra Cultural Complex under the banner of Lahore Arts Forum (LEAF) from 2002 t0 2006. As a writer most of his essays have been published in different newspapers and magazines. His prominent books are Lahore Di Vaar, Chak number 6, Nain Praan, and Samay. The book comprising some Urdu poets buried in Lahore titled ‘Aitihasik Lahore’ is Mudassar’s tenth book.

•?‘Aitehasik Lahore’ (History of Lahore in URDU) published by

We shall discuss some of the publications mentioned above:

Samay was the first novelette of Mudassar Bashir that was published in book form. It was a ground breaking work that opened new vistas in Punjabi fiction. It made the literary critics question the way forward for the Punjabi fiction. Samay also caught the eye of the famous writer Mohammad Hanif who invited Mudassar Bashir to Karachi Literary Festival for this commendable work in 2011. Following are two paragraphs from the review written by Moazzam Sheikh:

An odd mix of magical realism and gothic ambience, past history and present happenings, and philosophical rumination

When the protagonist of Juan Rulfo’s classic Pedro Paramo decides to visit his father’s village, Comala, since he promised his dying mother to do so, what flows for the next hundred pages is sheer haunting beauty, which a critic once described as, “a multi-voiced sojourn of hell.” And when the protagonist of Mudassar Bashir’s Punjabi novel Samay leaves for the village to see his sweetheart Naila after a gap of ten years, what follows is akin to torture. The sad part really is it didn’t have to be this way, for the novel carried within it seeds of ideas and things which in the hand of a cautious writer could turn into something less torturous, more haunting and beautiful.

Samay is the story of Chann, foreign-educated-recently-returned, who wants to visit Naila, a grown woman of thirty now, and decides to take along a close friend of his named Amir, all against his mother’s advice, and without the knowledge and permission of her father who, currently on a trip to the USA, hasn’t talked to his younger brother, Naila’s father, for over a decade at least. Naila is the reason why Chann (Punjabi for moon) loves literature and philosophy and went to study those subjects abroad, and now he has returned to teach. Although Bashir informs the reader that Chann knows Naila’s address by heart, he’s never bothered to write to her all these years. There’s a communication gap. There has been no exchange of love letters or letters expounding on the intricacies of literary theories and philosophical debates. One can only guess what stopped the protagonist from doing that.

The book ‘KaaN Wahgey Border’ (short stories) comprises twelve stories. This book has been published by Sanjh Publications, Lahore in December 2017. The first story ‘Deputy Commissioner’ is a very interesting tale of two school fellows meeting after many years on a tyre puncture shop. The protagonist by now was Deputy Commissioner of Lahore. The scene is when he moves out of his office, passes by various places on Lower Mall only to be informed by his driver that one of the tyres of his car was punctured. They end up a puncture shop. He comes across the owner, a tall, hefty man of his age clad in traditional Dhoti and Kurta. They recognize each other as school class fellows. This fellow was an actor now. Both recall school and college incidences, their teachers, climbing of wall to enter Government College etc. When the DC leaves, he asks his friend whether he could do anything for him. The response was honest and simple, to fix street light in the corner. The story high lights exemplify the honest living of citizens of whatever rank they were.

The story ‘KaaN Wahgey Border’ (the crow at Wahga Border) is based on the story of a young crow that is born on the trees near Wahga border. His family members are also living in Atari on the other side of the border. His elders tell him that their species was independent specie and did not need a permit to fly on the either side of the border. The young crow and family feel threatened by the change of guards, the thumping of heavy shoes and gun firing shots thinking that a storm had come.

Mushtaq Soofi in his column Punjab Notes wrote on that the author’s stories to all intents and purposes fall in the tradition of realism that holds sway in a society which is largely illiterate that thrives generally on orality. The latter has in-built tendency to facilitate the expression what is dominantly simple and concrete which in no way necessarily implies the complete absence of abstraction and complex thought. The contents of this book have an edge towards photographic realism. They are readable but end up being prosaic. What distinguish the author from the other run-of-the-mill types are his keen observations, penchant for details and above all his intellectual and emotional orientation which connects him with the people in their joys and sufferings. He is at his best when he explores human society and its interaction or lack of it with nature and animal kingdom. Examples are his stories ‘Kaan Wahgey Border’ and ‘Langra Samaj’. The latter is a story of a horse, a beauty, as white as snow, reared with loving care for racing tracks and then discarded, is bought by a working class man for transporting rebar from factories to construction sites. Once when the cart is overloaded, the horse falls and one of his legs is broken. The story now starts when the shopkeeper fall in love with the horse and tries his best to restore animal back to its normal gait. The story emphasizes on the fact that the bond that connects man with animals is compassion.

It is a voluminous book of which the author gives explanation that in the thousand years of Muslim Rule in India, British Government gave title of ‘Shams ul Ulema’ to the prominent scholars. Muhammad Hanif Shahid in his book of the same title stated that out of 104 scholars holding this title 102 were Muslims. After the creation of Pakistan the contributions of these scholars was not much highlighted that the author has highlighted in his book under discussion. Earlier Mudassar BashIr had published his Punjabi book ‘Lahore Di Vaar’ on his sojourn of inside Lahore and graveyards where scholars are buried. The author explains that the word ‘Itehas’ was derived in Hindi language from Sanskrit.Earlier Hindi and Reekhta were two independent languages and the word ‘Itehas’ was used abundantly. It was the British who divided one language into 1) Reekhta based on religious connotations with Urdu and Farsi words namely Urdu and 2) Hindi with Sanskrit and Bhrij Bhasha words.

Muttahir Ahmad Khan in his Book Review on ‘Lahore Di Vaar’ (history of Lahore) published in a local daily on January 23, 2012 that this book draws upon experiences and acknowledgescompiling the cultural history of Lahore. The book explores Lahore in areas such as Maqbre (tombs), Mazaar (shrines), Pehelwan *wrestlers), Kavi (poets), Likhari (writers), Sangeet (music), Art, Theater, Film etc. Wrestling is age-old sports of Lahore and in the past may wrestlers of international stature were born here, The author discusses the struggle of wresters such as Jhara, Goga, Rustam, Bholu, Gama and Acha Pehelwans. The tragic end of Jhara who struggled to make his both ends meet in his last days is an indication of lost tradition and neglect by the concerned authorities. The author discusses the historical structures of tombs of Budhu, Mary Charlotte, Gul Begum Mian Khan, Dai Anga, Jaffar Khan, Nadira Begum, Prince Parvez and Ayaz, most of them a victim of sheer neglect yearning for restoration. The other areas have also been covered skillfully by the author making this book not only a document of history but also of what the present authorities need to do to bring the monuments back to its original shape. This book also teaches the younger generation of the personalities that brought or inculcated treasures to this city.

Moazzam Sheikh writes in a local daily that despite all the hurdles, writers and scholars writing in Punjabi face works keep trickling in. Mudassar Basheer’s latest collection of short stories Nain Pran is one such work. Each story starts with a promise even if it remains fulfilled or otherwise in the end. The textual quality of the prose and intimate knowledge of the culture keep the readers hinged to their seats till the end of the story.

This novel opens up vistas of multi-angular interpretations and diverse approaches. Basically it explores the relation of an individual with the society from all angles; moral, economic, linguistic, political or religious. The hero Sarmad is a typically developed youth of the present-day desiring to become an actor. It would not be wrong to dub him as a collective persona of modern-era Punjabi youth whose socio-cultural, racio-historic and ethno-lingual identity has been sacrificed at the altar of political and religious bonding, ironically brought forth by a divide. Muttahir Khan says in his review on November 22, 2019 that the author’s command over history, deep-rooted love for Punjabi Art, Literature, Culture and Folk Heritage and natural tilt towards Sufism and socio-religious subtleties have provided him an extra edge in composing this literary gem. Perhaps due to these reasons, this novel bagged the prestigious Dhahan Award (2019) in Canada.

• Highlighted the issue regarding the original location of Maqbra

Zaib-un-Nisa on the platform of Express News Channel.

Translations of some writings published by Academy of Letters, Pakistan, in Urdu and English.

Articles in Monthly Pride in both Urdu and Punjabi sections (SNGPL)

Articles in The Daily Times (English)

Detailed Photo shoots of many historical places of Lahore (for the preparation of Books ‘Aitihasik Lahore’ & ‘Lahore Di Vaar’).

– Wrote first 22 Episodes of the program, “FAISLAY SE PEHLAY” on