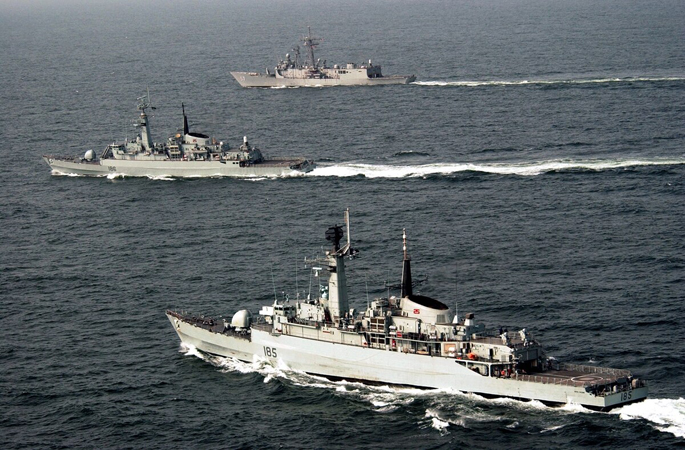 Maritime security falls in the category which enable the states to understand the threats within the sea. It depicts surveillance to the threats like inter-state disputes in the sea, piracy, maritime terrorism, narcotics trafficking, arms proliferation, environmental crimes. These existing threats cannot be dealt by the single state. So, this is the collective approach by the states to ensure the security of their respective maritime zones and ensures to counter maritime threats. In this context, Pakistan Navy always aim to implement stability in the maritime domain and to safeguard the maritime zones of the country. After gaining independence in 1947, Pakistan initially got minor share for its Navy including two naval trawlers, four harbor launches, four minesweepers and a figure of around 358 personnel. Whereas, India’s naval assets were much more than Pakistan. There was an explicit discrepancy within the assets distribution between India and Pakistan. However, Pakistan Navy despite of numerically less in size, depends on prompt and swift missions, effectively manage to safeguard the sea frontiers and national interests of Pakistan.

Pakistan fought its first war, against India over Kashmir issue, where Pakistan Navy played a significant role in defending the sea borders. In the wake of 1965 war, Pakistan launched Operation Dwarka against India, it was launched on 8th September, which is one of the impeccable victory of the Pakistan Navy. Dwarka is coastal city of Gujrat situated on north-western peninsula which has been quite significant for India, not only religiously and culturally but militarily too. There was the radar installation which was guiding Indian Air Force to launch attacks on important cities of Pakistan especially Karachi. The core objective of Operation Dwarka was multi-fold in effect as it was not only aimed at destruction of the radar but to provoke Indian warships stationed at erstwhile Bombay (now Mumbai) port to come to the Arabian Sea where Pakistani submarine “Ghazi” was prowling and waiting to engage those ships. That Operation was launched on 8th September, 1965 and it involved seven Pakistan Naval vessels while the submarine was waiting in the open sea. The bombardment on identified targets was completed in merely four minutes.

Operation Dwarka was not only a naval mission but it had different aspects too. It was beginning of the formal naval warfare between Pakistan and India with a roaring success of Pakistan Navy as preamble to future of naval developments. It acquired the objectives as success of the operation left India licking its wounds and no retaliatory air, naval or amphibious assault was undertaken by Indian forces on the coastline after that. The operation also proved a litmus test for operational preparedness, coordination, and precision of Pakistan Navy as it followed the given plan and achieved its targets including destruction of radar and other city installations, and it was instructed and made sure that no radio communication would be administered which was followed fully. Above all Operation Dwarka lowered the morale of Indian Navy significantly and even one Indian warship INS-Mysore which was stationed close-by at Cochin did not respond to the assault launched by Pakistan Navy.

The shining success of that operation wrote an incredible chapter in history of Pakistan and proved overture for further naval developments not only for Pakistan but at regional level too; it opened vistas as well as challenges in terms of competition in acquiring latest technologies to enhance naval capabilities including assault and navigation of maritime territories of the coastal states of the Indian Ocean. India denied the destruction of radar and its beacon or massive losses at other city installations, but it engraved serious imprints of humiliation for India which were unforgettable. Lately when in 1971 the submarine “Ghazi” was sunk near Vishakapatnam while mining the harbour and got struck by one of its own mines, India claimed that it was targeted by its Navy; but as matter of fact, Pakistan Navy’s sub-surface operational expertise has been un-shattered by Indian Navy in the later years and has provided Pakistan Navy with immense pride and grace.

Summarizing the above aspects, Pakistan Navy always do their best to demoralize the enemies of Pakistan. It has come to light to that Pakistan has effectuate the status of the indestructible navy which is focuses to desiccate the security of their locality and also her interest through maritime diplomacy. Pakistan Navy is involved in several fronts and also expanding her engagements in other fronts with other forces and has been emerging as the smart power. Concluding that, the Pakistan Navy better knows how to wrangle the maritime significance. And also indulged in constructing her facade as the soft power via using naval diplomacy. The Navy focused to expand the sequence borders on human and social security, whereas territorial security is also the major concern of Pakistan Navy.