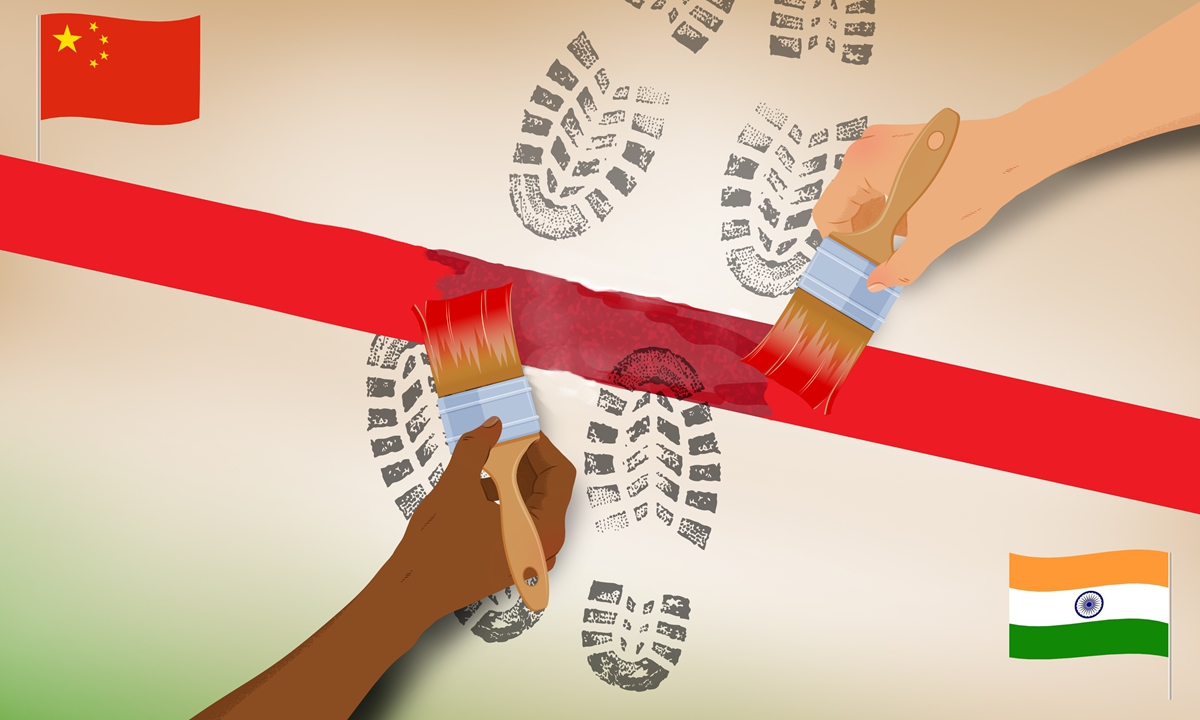 China strongly opposes Indian troops’ illegal crossing of the Line of Actual Control (LAC) on Monday, which is a severe violation of the consensus reached before at the multilevel talks between the two countries, the People’s Liberation Army (PLA) Western Theater Command said on Monday night.

Such blatant provocations lead to tensions on the border, and China urges India to withdraw its troops that crossed the LAC, strictly restrain frontline forces, and effectively follow its commitments, the PLA Western Theater Command noted.

Lin Minwang, deputy director of the Center for South Asian Studies at Fudan University, told the Global Times on Monday that Indian action this time will definitely escalate tensions, as China has been forced to be tough and would take action; otherwise the Indian provocation would be endless.

“The negotiations held by both sides since June 15 have achieved limited progress, as the Indian stance remains tough, and even urged Chinese troops to retreat from some locations within Chinese territory, which China has refused. This time, India has increased its troops to about 40,000 in the border region, which makes the situation more intense,” he said.

Although India fortified its military deployment, China has also increased its troops in the border region, and both sides have to prepare for winter as well. India actually has no advantage in a potential conflict, Lin noted.

Indian media again hyped fresh conflicts with China, while accusing the PLA of “provocative movements.” It is speculative calculation, which is a very dangerous move without clear understanding of the border situation between the two countries, Chinese experts said.

This comes shortly after the Chinese Foreign Ministry rejected claims that Chinese border troops tried to carry out fresh violations along the border.

The Indian defense ministry said in its latest statement that in an incident along the Line of Actual Control (LAC) between Saturday and Sunday, the PLA troops “violated the previous consensus arrived at during military and diplomatic engagements in the ongoing standoff in eastern Ladakh, and carried out provocative military movements to change the status quo,” India Today reported on Monday, citing the official document.

Quoting unnamed Indian Army sources, the report also noted that the “Chinese Army had tried to transgress into Indian areas using a sizeable number of troops. But the Indian Army pre-empted the Chinese attempt, and foiled their move.”

When asked about the information released by the Indian army, Zhao Lijian, spokesperson of the Chinese Foreign Ministry, refuted the report, claiming that Chinese border troops have always strictly observed the LAC, and have never crossed the line. The border troops of the two countries have been in communication over territorial issues, he said.

Some forces in India have been speculating on the border situation, trying to incite tensions with China despite several rounds of senior military-level talks on disengaging frontline troops, following the border skirmish in June, some Chinese experts said. Such a reckless intention is very dangerous miscalculation, echoing the rising confrontation between China and the US. Indian side has not fully realized the gap of military capabilities between two countries, and how severe the consequences would be if India continues instigating border conflicts, they noted.

India illegally crossing the LAC reflects its hasty mindset, Qian Feng, director of the research department of the National Strategy Institute at Tsinghua University, told the Global Times on Monday.

India hopes to gain an upper hand in border talks with China through little tricks such as launching provocations. However, as long as it steps up provocations, logistical supplies at the border would become a huge pressure on India, he said.

“Given the worsening coronavirus epidemic and its stalled economic growth, it would be a loss for India to continue its input in the border area, both in terms of military and supplies,” he said, noting that through provocations, it attempts to exert pressure on China.

Faced with a growing hostile attitude of India against China and continuous military provocations, about 70 percent of respondents to a recent survey conducted by the Global Times and China Institutes of Contemporary International Relations (CICIR) agree that the Chinese government should be tough in fighting back against India’s provocations, and 89.1 percent support military retaliation, with 50.4 percent of them “strongly supporting” self-defense and counter-attacks.

Since the border conflict between China and India in May, India has fortified troops and tank regiments in Ladakh, and such armored deployment is aimed at containing the PLA movement in the area, Indian media Business Standard reported on August 3.

A survey of India Today-Karvy Insights Mood of the Nation (MOTN) also suggest that nearly 60 percent of respondents agree that India should go to war with China over the border conflict, India Today reported on August 7, after local media the Hindustan Times, citing a recent Harvard University assessment, claimed that India has the upper hand in military deployments along its border with China, and has closed the military gap with its neighboring country.

Chinese analysts said Indian military forces have some advantages in the border regions in terms of quantity, because it has a better geographical environment. But China can immediately transport huge amounts of troops by its advanced infrastructure like high-speed railways to the border region once China decides to retaliate. And the combat capability of the PLA is much more advanced than Indian troops; so in a real war, India might get a head start, but China will soon overturn it.

Chinese experts also said India’s move to increase its military presence in the border regions, even crossing the LAC to incite more tensions, is unhelpful to deescalating tensions, while China is trying to cool down the situation through patience.

Since Galwan Valley skirmish in June, the PLA has held a series of intense and multidimensional drills, while the two sides have been pushing forward diplomatic and military talks to ease the situation. Last week, two J-20s, the most advanced stealth fighter jets of the PLA Air Force, were spotted at an airport about 300 kilometers from the border region, foreign media reported, but Chinese experts suggested that foreign media not over-interpret such a deployment as China wants to deescalate the tensions.

“As far as I know, the magnitude of the latest conflict was not the same as the incident on June 15. No casualties, no bloody confrontation,” Qian Feng, director of the research department of the National Strategy Institute at Tsinghua University, told the Global Times on Monday. The situation has also been eased, but as the 6th round of military talks would soon be held, such hype on rising conflicts may serve as some leverage for negotiations, he noted.

Over the past two months, China and India have held several rounds of senior military-level talks, and agreed to disengage frontline troops. The Hindu reported last week that as the standoff along the LAC in eastern Ladakh entered its 17th week, the two sides were preparing for another round of military talks to resolve the disputes.

Xie Chao, an assistant professor on Indian studies at Tsinghua University, told the Global Times on Monday that a sharp contrast could be interpreted from the latest statement from India and what the Chinese FM said. It also shows that India continues to hold a hostile and accusatory altitude on the border conflict, while China is mild and restrained.

For a long time, India has been fortifying troops on the Indian side of the border, especially since May. However, China has not followed suit, only maintaining necessary military deployment in case of an emergency, Xie said.

Given the complex history of the China-India border, the two sides have different understandings of the LAC, but have a complete set of procedures and agreements to resolve differences, Xie said, adding that “Such groundless accusations by India will not help the efforts of the two sides to cool down the tense border situation.”

Chinese analysts warned that India should have a clear understanding that China is much stronger militarily than India. If New Delhi continues such provocative rhetoric, or launches large-scale attacks at the border region, it would face severe consequences.

The latest survey on China-India relations conducted by the Global Times and China Institutes of Contemporary International Relations (CICIR) showed that more than 70 percent of participants believe that India is too hostile toward China, and nearly 90 percent surveyed support a strong government retaliation.

If India makes more provocations and launches new border conflicts against China, about 90 percent of respondents support China defending itself and striking back at India with force.

By showing their resolve to fight with China, India is trying to pressure China to make concessions, especially amid the rising tensions between the US and China. The South Asian country intends to use the influence of Washington to check and balance Beijing in the Asia-Pacific region, experts noted.

The US plans high-level talks with “Quad” security partners from India, Australia and Japan in September and October, US President Donald Trump’s national security adviser said on Friday. Some Chinese experts said such talks would further stir regional tensions, when China is making efforts to solve disputes with its neighbors through negotiations.

“The domestic nationalist sentiment is inciting Indian officials to make this dangerous military gesture for the sake of their own political gain, which would only make border situation more intense, and lead to a dangerous result,” Xie said.