Reminiscing past glory from Chiragh Din to Ustad Daman

* Ustad Daman was a popular figure of inside Lahore, famous for his poems full of social and political sensitivity depicting the sensuousness of masses 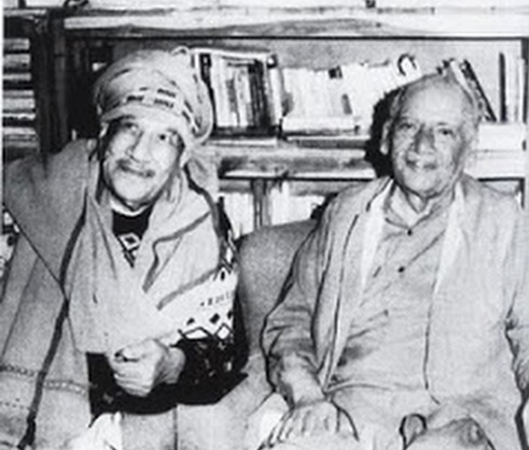 Though Sachal Studios, Lahore continued carrying out quality music recordings, another dimension in which it exceled was printing of books on chosen themes.

Unfortunately, this excellent set up is disbanded now due to exit of its director Mushtaq Soofi and ailment of Izzat Majeed, the owner. The latest news is that it is on sale now. One of such Sachal Studios published books is on the life and poetry of Ustad Daman, written by Tanvir Zahoor, a veteran writer and journalist.

Ustad Daman was a popular figure of inside Lahore, famous for his poems full of social and political sensitivity depicting the sensuousness of masses. What he said came instantly on the lips of people in the streets. Even today it is in fashion that some of the politicians quote his verses in their speeches. He was a courageous person, not afraid of any political leader or any Army General or any Dictator. Ustad Daman always challenged them openly through his poetry. His poems therefore were outcome of any unusual event or happening in the political scene. He was considered to be a pillar of Punjab’s traditional friendship that always raised its voice against oppression.

While looking for the other books on Ustad Daman, one finds some attempts being made in the past, one by Pakistan Academy of Letters written by Dr. Amjad Ali Bhatti under the series ‘Pakistani Adab Key Ma’amaar’. The other writers who had contributed something on Ustad Daman were Mian Muhammad Zaheer Akhtar, late Kanwal Mushtaq and Farzand Ali. Shafqat Tanvir Mirza stated in a local daily that Ustad Daman’s career started much before Pakistan came into being as a disciple of Ustad Hamdam. Other poets that could be termed as his contemporaries were Ferozeuddin Sharaf, Mohan Singh Mahir, Maula Bukhsh Kushta, Akhtar Lahori and Sufi Tabassum.

While looking for the other books on Ustad Daman, one finds some attempts being made in the past, one by Pakistan Academy of Letters written by Dr Amjad Ali Bhatti under the series ‘Pakistani Adab Key Ma’amaar’

Tanveer Zahoor states that PTV Lahore Center had recorded an obituary on Ustad Daman but was not allowed to be telecast. In this programme Safdar Mir had said that if Bhutto was a name in politics, so was Ustad Daman in poetry. Even Faiz Ahmad Faiz and Sufi Tabasum used to visit Ustad’s Hujra and shared some knowledge because of the dialogue therein.

Ustad Daman used to live in Texali Gate, Lahore in a small room whose sole property comprised two chairs and a bed surrounded by books. When personalities came to visit him, some had to sit on his bed. Ustad used to write salient points of his conversation with his visitors in a diary. He was fond of cooking and eating. Ustad Daman was born in Chowk Matti on September 04, 1911. His real name was Chiragh Din. He was son of Miran Bukhsh, Tailor Master. Ustad Daman, after trying for some government job and not succeeding had opted for his father’s business and in no time became expert in stitching clothes. When he was thirteen, the family moved from Chowk Matti to Baghbanpura. He passed Matric Exam from Dev Samaj School. There too, the family opened a tailoring shop.

He started writing poetry just after Matriculation. In 1949, his fame shot up when he read critical poem on the working of Municipal Committee, Lahore under the chairmanship of Mian Iftikhar uddin. Now he was asked to recite a poem at the start of every political assemblage. During riots in 1947 his shop was destroyed. He moved to a small room near Badshahi Mosque. His total possession comprised a few books. This Hujra is the same where Shah Hussain Rehmet Ullah Elleh had also once stayed. Ustad Daman said that this Hujra was full of light of knowledge. He stayed there till his demise in 1984. He got married but his wife and new born died, after which he did not marry again. Thereafter he spent all his life in saying poetry for labourers, peasants, poor and oppressed sects. He was given the title of Ustad by the intellectuals who appreciated his knowledge and craftsmanship in Punjabi poetry. Ustad Daman had a strong physique and was a simply dressed person, always clad in Kurta and Dhoti. He had a shawl on his shoulder and a cloth wrapped around his head. 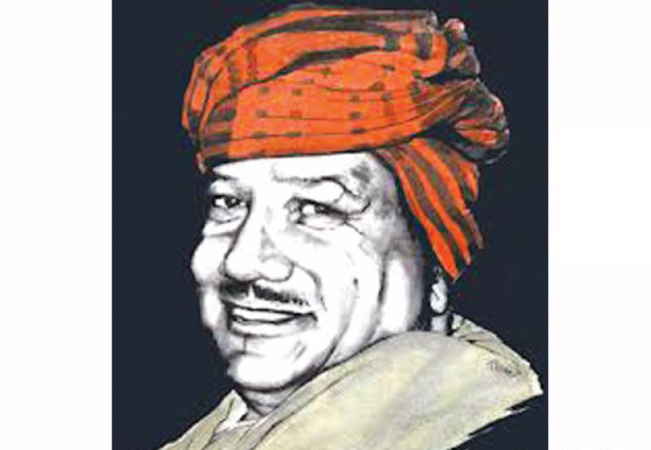 Ustad Daman had the God-gifted quality of saying appropriate lines on a given situation. He always despised the ruling groups who took advantage of the poor and raised his voice in support of those who were oppressed by this group. In support of Punjabi language he laid the foundation of ‘Punjabi Adabi Sangat’ of which he remained Secretary. A little while after independence, in Delhi, he read the following poem:

Indian Prime Minister Jawaharlal Nehru was present in this moot who declared him ‘Poet of Freedom’. He started crying and offered Ustad Daman to stay in India but he declined the offer by saying that he shall stay in Lahore, Pakistan even if he is jailed.

Some impressions of intellectuals who were close to Ustad Daman were made public by Tanveer Zahoor in his book. These write-ups were in the custody of the author for some time now. For instance, Dr. Agha Yameen says that Ustad Daman was a ‘Mard Qalandar’. When sick, he was more worried about his friends rather than himself. Ustad was fond of Agha Yameen because of commonality of their interest in Farsi literature. Aizaz Ahmad Aazar remembers Ustad’s conversations. He pinpoints Ustad’s retaliation against State oppression. For example Ustad said ‘Goli Sameney Wey, Aei Tey Wajni Aei/ Aseen Aj Mar Gaye Bhavein Kal Mar Gaye/Par Kahanian Jud Tuk Pain Giyan/ Kehri Mardey Mardey Aseen Gal Kar Gaye.’

Jagtaar recalls an addition to this stanza which was ‘Barkaan Marna Aein, Kadi Dareen Janaan Aei’.

After having so much about Ustad’s 10 by 10 Hujra with no ventilation, the visitor noticed a TV, a cooler, a gramophone studio and a tape recorder in the room as well. Ustad Daman had collections of a novel piece of Geeta, knew a lot about Vidhata Singh Teer, Jaswant Rai and Ustad Sharam Singh etc. Jagtaar was impressed by Ustad’s knowledge of Arabic, Farsi, Hindi, English, and Punjabi and above all of Russian language. During this visit Ustad once came to visit Jagtaar in his hotel room inviting him for dinner. Upon refusal on the pretext that he was already a guest of Kishwer Naheed and Akhtar Hussain the same evening, Ustad came out spontaneously with the poem ‘Panchi Udada Udada Jaey Jithey/Jo Vi Thaan Owanda Aei Namurad Awenda Aei’.

It was much later Jagtaar came to know that due to bold stance taken by Ustad Daman on political issues he had to go to Jail from the British Rule to the Bhutto’s, the latter on the false allegation of possessing a bomb.

Tanvir Zahoort’s book also contains specimens of Ustad Daman’s unpublished poetry; on the city of Lahore, love for his mother tongue, his Sufi poetry, his poetry on drinking, Ustad’s version of Heer, political colour and some couplets said before his death. Also contained are some of his photographs with Indian actors and writers such as Kamini Kaushal, Devanand, Shashi Kapoor, Om Parkash, Prithvi Raj, singer Muhammad Rafi and Krishen Chander. A memorable photograph with Faiz, Munnoo Bhai and Dr. Ayub is also given and one with Pakistani actors Lala Sudhir and Yousuf Khan. Ustad Daman’s couplet said on Amir Muhammad Khan of Kalabagh of Ayub’e era is ‘Saari Duniya Uttey Bahar Aai/Saadey Siraan Tey Kaley Bagh Reh Gaye’.

Writer Randeep Purewall writes on Site Uddari Weblog that Daman learned classical Punjabi poetry at home and was educated in Urdu. He also learned Persian and English including Shakespeare, Keats and Hardy. Having participated in school poetry recitals, Daman began attending musha’ara in the parks, fairs and bazaars of Lahore as a teenager during the 1920s. The movement for India’s independence had already begun. In 1929, the Indian National Congress made its Declaration of Independence from Lahore. The city was also home to Marxist groups like the Kirti Kisan and anti-colonial and revolutionary groups like the Hindustan Socialist Republican Association. Daman recited his own revolutionary and anti-colonial poetry at the musha’ara. He recited:

‘In China the Chinese are grand,

In Russia they do as they have planned.

In Japan its people rule over its strand.

The British rule the land of England,

The French hold the land of France,

In Tehran the Persians make their stand.

The Afghans hold on to their highland,

How very strange is indeed this fact,

That freedom in India is a contraband’

Daman’s first act of political defiance came in 1958 when he made fun of Pakistan’s first military coup under Ayub Khan. Daman’s arrest however did little to temper his criticism of Pakistan’s military dictatorships and the corruption of its civilian governments in his poetry.

Daman wrote in Punjabi and the form, rhythm and metaphor of his poetry bears the influence of the classical and folk Punjabi tradition. If he could be sober and thoughtful in writing on the Partition, he could also adopt a more comic and satirical note in criticizing General Zia. Despite that he maintained a friendship with poets like Faiz Ahmed Faiz and Habib Jalib, but lived unassumingly on his own.

His poetry was published after his death by his friends and followers. The room he lived in near the Badshahi Mosque has since become an academy in his name.

What a house, this Pakistan!

Above live saints, down thieves have their run

A new order has come into force

Up above twenty families, below the hundred million.

We live under the divisions heavy ton.

Other people may have conquered the moon.

But in a yawning precipice a place we’ve won.

I ran and ran and was aching all over,

I looked back and saw the donkey resting under the banyan.

Thankful are some if they can chop wood

the others, on them, their orders bestow.

Why have the people lost their mind?

For every one the Almighty has a loving glow.

People are the real masters of this world

Orders do not from the handle of a sword flow.

The ones, Daman, who have forsaken God,

Those Nimruds are laid low at the very first blow.