Whether it is due to our Prime Minister’s support for the Turkish series, Dirilis: Ertugrul, or the general fascination that our population seems to have with the Ottoman Caliphate, Turkey is definitely a popular country in Pakistani discourse, especially right now. The historical and cultural bonds between the two countries are undeniable and strong. However, in a world order that prioritizes private enterprise, exports from Pakistan to Turkey actually fell significantly between 2018 and 2019 and investment by Pakistanis in Turkey remains consistently low despite the considerable opportunities that can be offered by investing in the Eurasian country.

Before embarking on this topic, the author would like to clearly state that real estate is one of the various methods to accumulate wealth, but not the only one. However, while citizens in developed countries are comfortable with investing in their stock indices due to trust in socio-economic conditions and favorable macroeconomic factors, that has consistently been missing in Pakistan and the author does not foresee that perception changing in the near future. Due to a general lack of trust in the administration of the country and the fact that land is a tangible asset and also a status symbol, Pakistanis have preferred investment in land, especially in reputable housing schemes like DHA and Bahria, over the various stocks available in the Karachi Stock Exchange, and while that may or may not be justified, that is not the focus of this article.

Like Pakistan, Turkey possesses a strategic location on the world map

Like Pakistan, Turkey possesses a strategic location on the world map. It is located on the crossroad between the East and the West, bordering both Europe and the Middle East. Turkey’s land area of 783,562 square km. is slightly less than that of Pakistan, and while it’s population is less than half of Pakistan’s – 82 million vs approximately 220 million – its GDP is over twice that of Pakistan, $771.4bn vs $314.6bn, the figures used are of 2018.

Turkey’s GDP is more than double ours partially due to its exports of value added manufactured goods and tourism, whereas Pakistan has focused largely on raw materials. It is partially due to Turkey’s tourism, a sector that regularly contributes over 6% of the GDP that Turkey has liberal laws related to real estate investment as it encourages foreigners to invest in its economy. 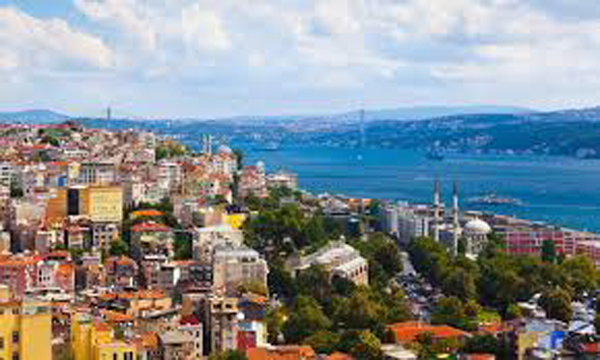 Turkish lira has fallen by almost 20% when compared against stable currencies like the US dollar and euro. While that should set off alarm bells for any prospective investor in Turkey, it is worth noting that Turkey’s macroeconomic factors remain positive, especially when compared to Pakistan’s. Turkey is still the biggest economy, by far, amongst its neighbours and militarily, it is a NATO member. While political pressures do exist due to the Erdogan administration’s policies, which have contributed to the devaluation, they are expected to alleviate if Turkey corrects course politically and the Turks still possess valuable influence in the halls of power, especially in Washington D.C. and in Berlin. The Trump administration recently allowed Ankara to establish its hegemony in Northern Syria and abandoned the Kurds, for instance, and Berlin is eager to continue its economic and military cooperation with the Turks.

While the devaluation in lira may alarm some investors, opportunities certainly exist for savvy buyers to snap up properties in Izmir and Istanbul at rates that are comparable and, in some cases, lower than those of Lahore and Islamabad. With Pakistani rupee being no stranger to devaluation itself, now may be an excellent time to invest in the Turkish real estate market as it is one of the few destinations where rupee stretches the furthest. Added to this is the fact that Turkey grants residency to all property owners, irrespective of the value of the property. There is no physical residency requirement although owners would have to visit annually to renew their Residence Permit. After a five year residency period, owners would be eligible for citizenship. For individuals willing to make larger investments, investing $250k gets you and your immediate family citizenship within six months, without the hassles of having to deal with renewing with a residence permit annually. The Turkish passport is a relatively strong travel document, granting one the right to travel to 110 countries visa free and is definitely an upgrade compared to the Pakistani passport. This, plus the fact that Turkey has a mild Mediterranean temperature makes Turkey an idyllic investment destination for Pakistanis, as it has been for Europeans and Arabs over the past few decades.

Turkey offers a bit of everything for the different cliques in our society. It is a culturally Islamic country for individuals who want to maintain close ties with the religion. At the same time, it maintains a separation between the Mosque and the state, has deep cooperation with the West and is a historical and cultural power. For individuals looking to invest away from the inflated real estate markets of the Gulf Arab countries in a stable economy with a quick path to citizenship – something that’s unattainable in the Gulf- Turkey may be the answer.

The writer is a Personal Finance Specialist who’s been working in the Finance Industry in Canada for over three years. He is a MBA candidate from the University of Manitoba