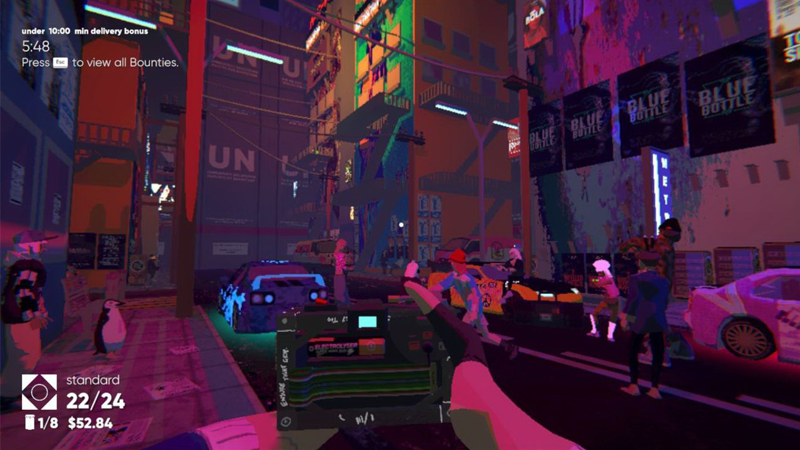 In Te Reo (Maori), “umurangi” means red sky–a perpetual sight in this first-person photography game, and a sign of the climate anomaly plaguing the city of Tauranga Aotearoa. You’ll see this when raising your camera towards the flock of seagulls gathering at sunset, or a distant view of Mount Mauao amidst the billowing clouds of crimson and orange. Inspired by his personal experiences around the Australian bushfire crisis, Maori developer Naphtali Faulkner envisions a cyberpunk future that’s so much more than a neon-soaked dystopia. As a result, Umurangi Generation becomes a shining example of what cyberpunk media should be; it boldly confronts the themes that underpin the genre, from its condemnation of capitalism to rebuking the corporate structures that govern its cities.

Umurangi Generation makes its statements not through dialogue but by letting you explore its themes through the exploratory lens of photography–and its through this framing that the game’s message is made all the more resounding. Akin to a bystander, you don’t get to interact with the city’s inhabitants in Umurangi Generation; you just quietly observe and snap pictures of things you see in your environment.

This city is teeming with a distinct Maori culture, with Umurangi Generation drawing from the developer’s Ngai Te Rangi roots to eschew recycled cyberpunk tropes. The immediacy of this sci-fi dystopia thus is an affecting and authentic city that doesn’t rely on the aesthetic of frivolous foreignism. One example is how the urban structures of this futuristic version of Tauranga Aotearoa aren’t smothered in a bevy of inscrutable Japanese fonts to imply a sense of otherness–an outdated cyberpunk trope rooted in fears of Japan’s technological superiority during the 1980s. Instead, the walls of its high-rise building and architecture are graffitied with contemporary Maori symbols such as the koru and the huia feathers, a proud and self-assured display of Maori identity. Some people, too, also wear the huia feathers as their headgear. Nonetheless, familiar visual cues that dominate cyberpunk are still there, including technopunks who tinker their mohawks with electronics that glow with fluorescent hues and the kaleidoscopic displays of electronic billboards and corporate logos adorning the skyline. It’s a refreshing portrayal of cyberpunk outside the genre’s typically Eurocentric stylings.

In this metropolis, you’re a young photographer working with the Tauranga Express to complete a checklist of photography bounties. These range from capturing static images of objects like disposable cameras and spray cans to searching for and snapping pictures of iconic landmarks strewn across Tauranga Aotearoa. Admittedly, some of these objectives can be obnoxiously tedious to unearth. One required me to take a picture of a snarky version of some warnings–the inane instructions slapped on items that belonged to the United Nations armed forces–that were a common sight in town. It was only after searching for close to half an hour that I accidentally chanced upon some scribbles of this text on a soldier’s protective gear. Another had me hunting for the most suitable spot for photographing 10 solar panels within a single frame, and while using a specific lens too–a surprisingly challenging endeavor. Yet these are trivial concerns, as you’ll soon grow familiar with the inner workings of the game world and its logic.

Then there are bonus objectives you can fulfill as well: taking group pictures of your merry band of friends (three spirited youths and a deadpan penguin); collecting a certain number of film canisters, finishing your assignment under 10 minutes, and more. The more objectives you complete, the more equipment–from telephoto to fisheye lenses–you’ll unlock. Eventually, this upgraded arsenal opens up a litany of new ways for you to compose your shots, which makes revisiting and exploring past levels particularly fulfilling. All these are grounded in real-world photography, where you can tinker with and edit your pictures with an expanded array of options such as color balance, contrast, and saturation.

Umurangi Generation doesn’t get too hung up on the way you take your photographs either. You won’t be penalized for the quality of your pictures, although you can score more cash–just another bonus objective to attain–for pictures that do interesting things with color, composition, and content. While offering a sense of achievement, this still allows you to partake in the simple pleasures of shooting, of discovering vignettes of dystopian life and humanity that are impossible to look away from. That’s the biggest trick Umurangi Generation has pulled: its purpose, really, is to invite you to look beyond the city’s glistening surfaces and delve into the sobering narrative that exists outside–be it beneath or above–its infrastructure.

That purpose is in the details, like those tucked within a newspaper that’s discarded carelessly next to a boombox, that hint at the apocalyptic event taking place. It’s in the countless memorials erected in the nooks and crannies of the city, dedicated to Maori pilots and civilians, that inform you of the grim reality of surviving through wartime. It’s in the sight of forlorn vagrants dozing off against a wall of movie posters about heroic exploits against aquatic aliens, serving as a stark reminder of those who continue to occupy the lowest rungs of this high-tech society, unable to move out of poverty. It’s also about your evolving role as a photographer–from capturing candid shots of youthful exuberance as a street photographer to documenting the effects of armed conflict as a war photographer–that nudges your perspective as you traverse the spaces within Umurangi Generation.

Cyberpunk isn’t just a fictional realm for people to escape into; traditionally, it has reckoned with and challenged the status quo that feeds real-world inequality, such as in stories like Blade Runner and Neuromancer. Umurangi Generation understands this implicitly, its universe reflecting the realities of current-day events like the COVID-19 pandemic and the Australian bushfires, along with the inaction of the leaders managing them. News within Tauranga Aotearoa about its Prime Minister enjoying a long holiday in the midst of a disaster mirrors a similar vacation taken by Australian Prime Minister Scott Morrison during the bushfire crisis. Its youth–the eponymous Umurangi Generation who grew up seeing the red skies of Tauranga Aotearoa–are also a reference to the socially conscious generation of today’s young people. Awashed in this rich setting and its blockish, lofi visuals, the metropolis feels alive and authentic, yet desolate and gritty.

In one poem called “War Photographer” by Carol Ann Duffy, the effects of war are explored through the eyes of a war photographer. He trembles as he recalls his experiences during combat, replaying vivid memories as he develops his pictures in a dark room, his reaction a stark contrast to the apathetic readers that see his pictures on the Sunday papers. Even though readers may be momentarily moved by these images, they were ultimately unable to empathize, having been sheltered from the horrors of war, with reading the news becoming a simple activity to pass time between meals. Umurangi Generation wants to incite its players into taking up a more active role in this fictional crisis–not as a transhuman supersoldier with cybernetic implants, but as a photographer who’s trying to make a living in this hellish, urban landscape. Not only is the game a realization of our anxieties about our current, looming future, it’s also a powerful evocation of the corporatist state that threatens to overrun our lives, and a startling statement of resistance against them. For a game that’s ostensibly about photography, Umurangi Generation achieves so much more.